So, I’m currently interested on the pubbakiccam/ preliminary duties format in Theravada Patimokkha.

As I know, Theravada didn’t have Patimokkha Sutta like other sects, so maybe they have different format for each sub-sects.

In Sangha Theravada Indonesia, they use format like this: 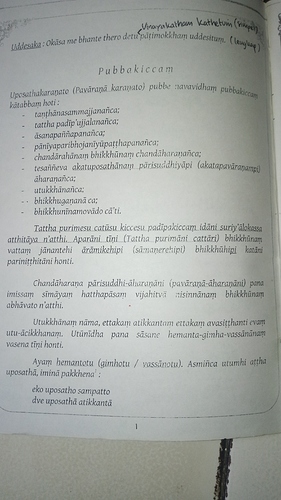 but for nuns advice/ ovada, they use “Bhikkhuninamovado pana idani tasam natthitaya n’atthi.” (Meanwhile, to advise the nuns there is no because they do not exist anymore.)

I’m looking for other format of Bhikkhu pubbakiccam. I also need a format for Bhikkhuni pubbakiccam too. Can anyone please help me?

Thank you, it’s very useful for me.

I’m still looking for Bhikkhuni format, and maybe there’s another format pubbakiccam that not use “non existence nuns”.

A version of the Bhikkhuni Patimokkha used by many contemporary English language Bhikkhuni communities is available from the Friends of the Early Buddhist Teachings website. The pubbakiccam is on pages 4-5.

Thanks but, it’s just like Suttacentral format. It’s just mention some preliminary duties without explanations for each point.

From the introduction to the book Ven. @cankamati linked (p. xviii):

There is no indication in the Vinaya and Pātimokkha
commentaries that the summary is to be recited before the Nidāna
and this would be a later development. Originally the summary
would have been a memory aid. There is also no mention of formally
questioning and answering about the duties etc. in the commentaries.
The exact source of the question and answer versions of the
pubbakaraṇapubbakicca can not be traced.

So, according to Vinaya, these duties must be performed before the recitation of the Patimokkha, but there is no Vinaya requirement for a formal question and answer recitation concerning each point. I believe this is why there is no specific format given for the questioning on SuttaCentral or in this edition of the Bhikkhuni Patimokkha.

The actual procedure used in the Bhikkhuni communities I am most familiar with is that the seniormost bhikkhuni present is responsible for ensuring that the duties are done. Some of them, she can observe for herself by her presence in the Uposatha hall (Are the seats arranged? Are there lamps? Is there water?). She can also ask about things in English if she needs to (Has the hall been swept?). Once she has ensured that all the preliminaries are complete, the summary is chanted, followed by the senior stating formally that everything has been done, and inviting the recitation of the Patimokkha.

Further information about how this is managed can be found in the appendices of the Bhikkhuni Patimokkha book (p. 114):

One of the duties of the senior bhikkhunī in a monastery is to announce to the others, “Today is the uposatha day” (“Ajjuposatho”). The Canon recommends that she announce this in good time, but allows her to announce it whenever she remembers during the day. [Mv.II.19.1]

At an agreed on time, the Saṅgha should meet, with the most senior bhikkhunī coming first. [Mv.II.10.1]

Pubbakaraṇa (to be done beforehand)

The bhikkhunīs, once they have met, should convey the consent and purity of any ill bhikkhunīs who are within the sīmā, (shared-communion-boundary) and who have not joined the meeting. Then they should tell the season and count the number of bhikkhunīs. As well, before the Pātimokkha, they should have clarified the date of the uposatha and requested the ovāda from the Bhikkhu Saṅgha.

This may be similar to what Venerable Ñāṇatusita describes as the procedure for the Burmese traditions (p. xviii):

In Burma the preliminary dialogue is recited in Burmese rather than in Pali. However, the two summary verses from the Kaṅkhāvitaraṇī are recited in Pali.

(Though this does make it sound like there’s a formalized Burmese version of the dialogue, which would be different from the procedure described above for the Bhikkhunis.)

I guess the interesting question would be whether there are contemporary Bhikkhuni communities that do use a version of the formal question and response dialogue in Pali. I don’t know the answer to that! Perhaps others have more information about this?

Theravada didn’t have Patimokkha Sutta like other sects, so maybe they have different format for each sub-sects

There is an extensive discussion of the various forms of pubbakicca in Nyanatusita’s peerless Analysis of the Bhikkhu Patimokkha.

Possibly every monastic group (nikāya) in the Theravāda tradition has its own Pali version of this summary, but all of the versions are based on the three verses found in the Kaṅkhāvitaraṇī.

The patimokkha texts of the so-called Dvemātikāpāḷi contain these three verses. You can find them on SuttaCentral for bhikkhus and bhikkhunis. They are sourced from the VRI here and here.

These verses are brief and to-the-point, and avoid issues with interpretation or finding an appropriate recitation for the bhikkhunis. A Burmese tradition is to simply recite these verses in Pali, and discuss the details in the local language. That seems to me an excellent approach, and I would recommend it.

Those communities that accept bhikkhunis have changed this. In Bodhinyana they say:

Bhikkhuninamovado dinno hoti
The advice for nuns has been given.

I think it’s the best to do. It’s more simple…

Those communities that accept bhikkhunis have changed this.

I need it, thanks Ven. Sujato…

Bhante, good answer, but maybe it could use this tweak. Most bhikkhu communities don’t have bhikkhunis in residence, and if giving Ovada to any bhikkhunis they’d likely be non-resident ones who’d sent a bhikkhuni to request it. Therefore if not giving Ovada, wouldn’t it be more technically correct, in most cases, to say that there’s been no advising of nuns because none have requested it? Rather than because none are in the monastery?

Sure, which is why I said “in appropriate contexts”. Having said which, I really think it’s best to just keep it simple.