I actually love the aniconic images of the Buddha, such as the footprint or even the empty seat. I find them very inspiring.

I like keeping things pretty simple myself but I do have a very simple altar (set up on a shelf in the bedroom where I sit) with a carved Buddha statue I really like (simple bald head, no topknot) in front of which I put a beeswax votive candle in a little lotus candleholder and flowers next to it if I have any available. To me it reminds me of all the qualities of the Buddha, my teacher. I also have a stone statue in the garden I can see out the window. I love seeing it sitting there no matter what the outer conditions are: rain, snow, fiece winds, blazing sun, smoke (wildfires), etc… a good reminder…

I have to admit I break all the traditional rules though as when I lie on the bed my feet are actually pointing in the direction of the altar. But that’s where it works and where there’s space, as it’s in front of where I sit, which used to be my zafu on the floor at the foot of the bed but now more often a chair. I don’t have a separate room I can use except where I have my computer and other work type stuff and it feels way too ‘busy’. I like the quiet and peacefulness and simplicity of the bedroom.

That’s what I would have preferred too. I had tried very hard to find one like that, but had no luck.

I also have a stone statue in the garden I can see out the window. I love seeing it sitting there no matter what the outer conditions are: rain, snow, fierce winds, blazing sun, smoke (wildfires), etc… a good reminder…

Very inspiring. I like the cut of your jib, madam!

Hello! Sorry for resurrecting this old topic, but I thought it would be better to post here than to start a new one.

I’m in the process of setting up a shrine at home, and I wanna get a custom table, so I need to choose the measurements and all that.

Is it absolutely necessary that a shrine be above one’s head while sitting? I know tradition dictates that it should be, and that it’s got a cultural reason as well, but to be honest, I find low tables a lot more pleasant to the eye (I know… I shouldn’t allow myself to be intoxicated by forms pleasing to the eye). But anyhow, as readers of the EBTs, isn’t assigning special ritual significance to our shrines Wrong View, somewhat? Through that logic, any aid we find inspiring for practice should be okay, right?

I actually love the aniconic images of the Buddha, such as the footprint or even the empty seat. I find them very inspiring. 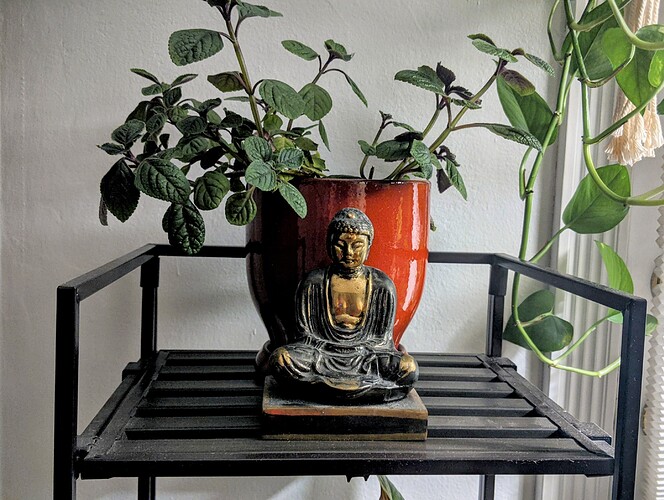 I think most of this stuff is just custom.

I just do what works. Maybe I’m crazy

Is it absolutely necessary that a shrine be above one’s head while sitting?

As a layman, I got to experiment with many different arrangements for my home shrine and (for me personally) I found that the most important thing was that the Buddha rūpa’s eyes be above mine while kneeling, so that I could literally “look up” to the Buddha while bowing and chanting. Any lower than that and it didn’t feel quite right to me. That still meant that the base of the statue could be significantly lower than my head (depending on the size of the statue, of course). Hope that helps!

Edit: here’s my old shrine I had as a layman for reference and mudita: 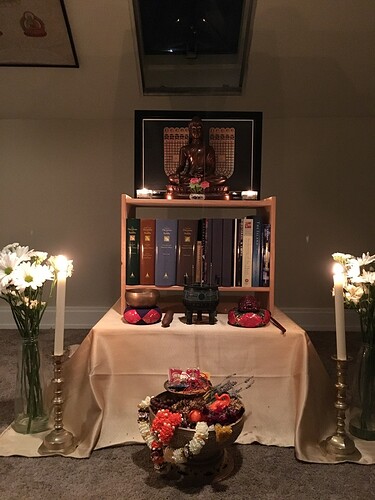 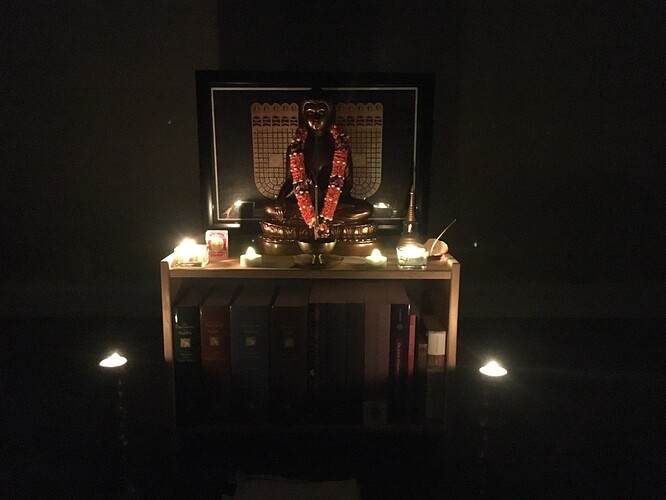 The Island! Love that one.

In my country’s monasteries, the shrine room where the Buddha image is situated, is called: “The Alter of the Great Hero.”

I’ve never looked to buy one, butfor sure, Buddha statues are way more common. I just meant I like the aniconic images I see in photos. I do have a Buddha statue (I think I described it in a post earlier in this thread a few years ago).

It’s nice to see the sutras in a central location. I was thinking recently about how Bhante Sujato sometimes mentions that in Thai monasteries, the Tipitaka will often be locked in a cabinet. I’ve seen that a bit myself. Then that makes me think of how other traditions use texts, where they are stored, who reads them, why they read them, what historically influenced that, etc.

Just to balance out the shrine enthusiasm… if anyone wants a textual reference for the image prohibition in Buddhism, it’s the Kalinga Bodhi Jataka by the way.

if anyone wants a textual reference for the image prohibition in Buddhism, it’s the Kalinga Bodhi Jataka

It seems the text does not indicate clearly “the image prohibition in Buddhism”? SuttaCentral

“How many shrines are there?”—“Three, Ananda.”—“Which are they?”—“Shrines for a relic of the body, a relic of use or wear, a relic of memorial “—“Can a shrine be made, Sir, during your life?”—“No, Ananda, not a body-shrine; that kind is made when a Buddha enters Nirvana. A shrine of memorial is improper because the connection depends on the imagination only. But the great bo-tree used by the Buddhas is fit for a shrine, be they alive or be they dead.”—“Sir, while you are away on pilgrimage the great monastery of Jetavana is unprotected, and the people have no place where they can show their reverence. Shall I plant a seed of the great bo-tree before the gateway of Jetavana?”—“By all means so do, Ananda, and that shall be as it were an abiding place for me.”

The words, “A shrine of memorial (uddesika cetiya) is improper, because the connection depends only on the imagination” could be taken as including images (at least that is how the Khp cmy takes uddesika cetiya, as including patima. Patima=images).

It was a bit difficult for me to pull up the Pali right now as it isn’t on SC, but as Ven @Dhammanando has pointed out elsewhere, the real translation should be, “there is no basis for a dedicatory shrine (uddesika cetiya) as that is bound up with my own person.” This is clear, the problem is the English translation.

edit: since posting this, I’m increasingly less convinced that I know what the Pali is really getting at. Maybe a good research project for someone.

Uddesika is memorial; cetiya is shrine. I think ‘memorial shrine’ can be both including and not including paṭimā ‘image’.

‘Image’ worship for a religion or person was not established yet at the time of the Buddha.

Hi. I have a small room devoted as meditation room. 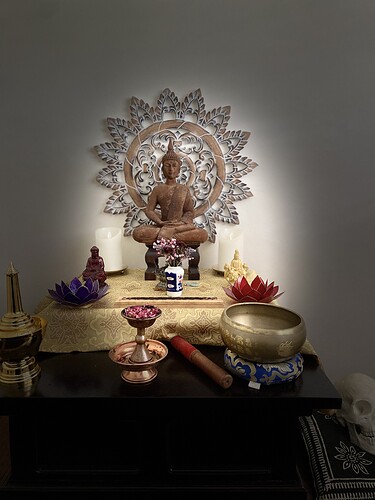 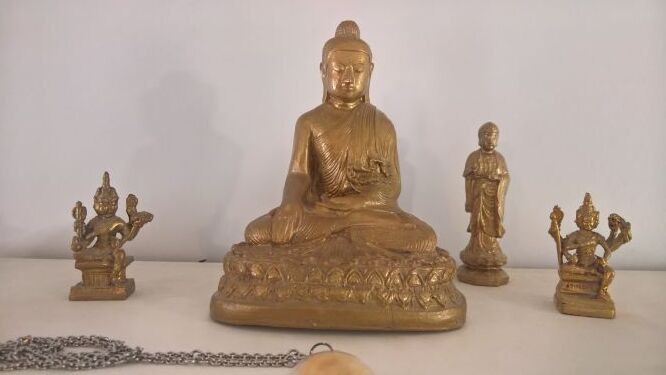 DIY and hobbyists’ stores that sell materials for amateur dolls-house-makers often have very nice ready-made staircases for those who find it too fiddly to make their own. You’ll need to buy three of them. Then paint one of them gold and one silver, decorate the third with imitation gems and glue them all together.

Voilà! You now have your own aniconic Sankassa Staircase image, just like the one on the Bharhut stūpa. 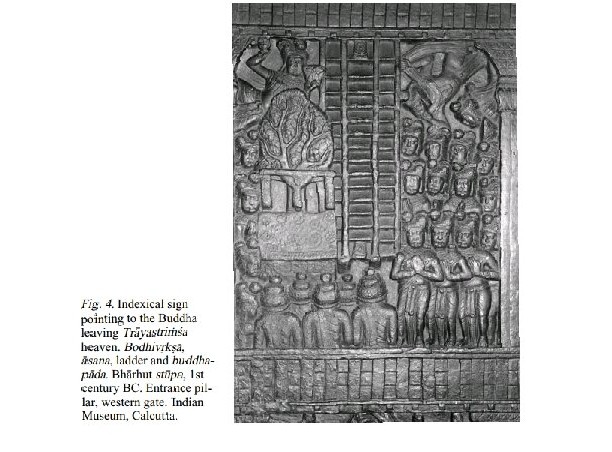 From the entry for “Sankassa” in the Dictionary of Pali Proper Names:

A city, thirty leagues from Sāvatthi. (DhA.iii.224). It was there that the Buddha returned to earth, after teaching the Abhidhamma Piṭaka in Tāvatiṃsa, following the performance of the Twin Miracle (Yamaka Pāṭihāriya) under the Gandamba tree. As the time approached for the Buddha to leave Tāvatiṃsa , Mahā-Moggallāna (Anuruddha, according to SNA.ii.570; cf. Vism., p.391) announced his coming return to the multitude, who had been waiting at Sāvatthi, fed by Cūḷa-Anāthapiṇḍika, while Moggallāna expounded the Dhamma. They then made their way to Saṅkassa. The descent of the Buddha took place on the day of the Mahāpavāraṇa festival. Sakka provides three ladders for the Buddha’s descent from Sineru to the earth: on the right was a ladder of gold for the gods; on the left a silver ladder for Mahā Brahmā and his retinue; and in the middle a ladder of jewels for the Buddha. The assembled people covered the earth for thirty leagues round. There was a clear view of the nine Brahma worlds above and of Avīci below. The Buddha was accompanied by Pañcasikha, Mātali, Mahā Brahmā, and Suyāma. Sāriputta was the first to welcome him (followed by Uppalavaṇṇā, SNA.ii.570), and the Buddha taught the Dhamma, starting with what was within the comprehension even of a worldling (puthujjana), and ending with what only a Buddha could understand.

On this occasion was taught the Parosahassa Jātaka (q.v.) to proclaim to the multitude the unparalleled wisdom of Sāriputta (DhA.iii.224 ﬀ; see also SNA.ii.570). It is said’ that the Buddha’s descent to Saṅkassa had provided opportunity for Moggallāna to show his eminence in psychic powers, Anuruddha in the divine-eye, and Puṇṇa his in skill in teaching, and the Buddha wished to give Sāriputta a chance of shining in his wisdom. (Ibid., loc. cit. J.iv.266; see also Jhānasodhana, Sarabhamiga, and Candābha Jātaka). He therefore asked of Sāriputta questions that no one else could answer. The opening words of the Sāriputta Sutta (q.v.) are supposed to refer to this descent from Tusita (sic). The site of the city gate of Saṅkassa is one of the “unchangeable” spots of the world (avijahitatthānaṃ). All Buddhas descend at that spot to the world of men after teaching the Abhidhamma (BuA.106, 247; MA.i.371, etc.). From Saṅkassa the Buddha went to Jetavana (J.i.193). A shrine was erected on the spot where the Buddha’s right foot first touched the ground at Saṅkassa (DhA.iii.227). When the Chinese pilgrims, Hiouen Thsang and Fa Hsien, visited the place, they found three ladders, which had been built of brick and stone by the ancients, to commemorate the Buddha’s descent, but the ladders were nearly sunk in the earth. (Beal, op.cit., i.203; Fa Hsien, p.24). 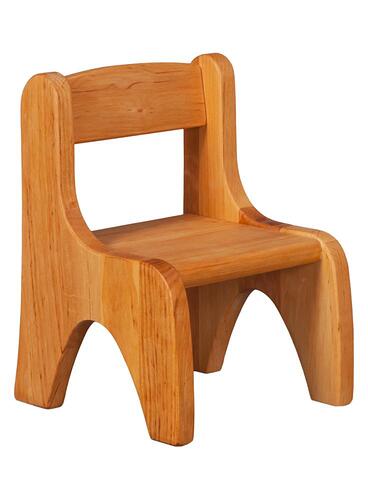 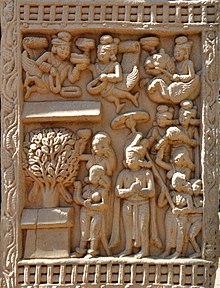 Since the beginning of the serious study of the history of Buddhist art in the 1890s, the earliest phase, lasting until the 1st century CE, has been described as aniconic; the Buddha was only represented through symbols such as an empty throne, Bodhi tree, a riderless horse with a parasol floating above an empty space (at Sanchi), Buddha's footprints, and the dharma wheel. This aniconism is relation to the image of the Buddha could be in conformity with an ancient Buddhist prohibition against sh... 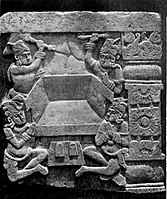 It seems making, selling different aniconic images of the Buddha in the market could be a good business.