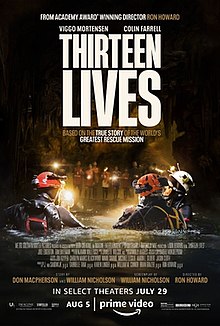 Thirteen Lives is a 2022 American biographical survival film directed and produced by Ron Howard, from a screenplay written by William Nicholson. The film stars Viggo Mortensen, Colin Farrell, Joel Edgerton, and Tom Bateman. Thirteen Lives was released in select cinemas on July 29, 2022, by United Artists Releasing, and began streaming on Prime Video on August 5. The film chronicles the events of the 2018 Tham Luang cave rescue that saw a junior football team and their coach trapped in a cav...

Kind of "Apollo 13 under water. " As Howard said on an interview on NZ TV, he is attracted to stories that would be laughed at as completely implausible if they were fiction, and he certainly knows how to put them together effectively. I was particularly impressed by how the Thai/Shan boys, and their parents, seemed quite realistic - it felt like actually being in North Thailand, despite being shot mainly in Queensland. It turns out that the actress who played one of the mothers was instrumental in that: Pattrakorn Tungsupakul on ‘Thirteen Lives’ and the Rescue - The New York Times It probably helps that she is from Chiang Mai. Personally I could have done with more of the Thai side and maybe an hour less of clunking around underwater in caves…

One thing that bothered me initially was when Phra Khuva Boonchum - Wikipedia turned up, since he didn’t look much like a regular Thai bhikkhu, and I wondered how Howard could have messed that up so badly. But of course it turns out he’s Shan, and the movie does actually give a reasonably accurate representation of his appearance:
Thai King Offers Robes to Monk Who Predicted Team Trapped in Cave Would Be Found

Thank you for the mini-review, I would like to watch this myself, I’m glad it has a realistic feeling and hasn’t been Hollywooded to death. I remember being incredibly moved at the time during the rescue attempt and afterwards when the boys all temporarily ordained.

Thanks. Obviously the challenge for any movie like this is to tell a story, which inevitably winds up with the number of people involved looking much smaller than it actually was. So, in the Chernobyl miniseries, for example, Emily Watson’s character represents dozens of scientists Chernobyl (miniseries) - Wikipedia and in The Imitation Game - Wikipedia one could get the impression that there were only half a dozen codebreakers working at Bletchley park. Here, Pattrakorn Tungsupakul’s character represents the parents, and the number of divers appears much smaller than it actually was Tham Luang cave rescue - Wikipedia

However, as I said, the characters that were able to be fitted in felt real, and that’s the key measure, in my view.