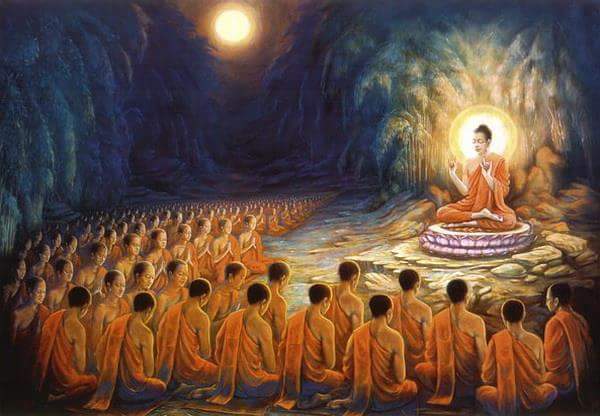 Today is Māgha Pūjā , also known as Sangha Day, commemorating the occasion when 1250 enlightened monastics spontaneously gathered to visit the Buddha and hear his teachings under a full moon.

This story is told in the commentary to the Dighanaka Sutta (MN74), where Sariputta became an arahant after hearing the Buddha speak. That full moon night,
1250 monastics came to visit the Buddha. This assembly was notable for having 4 factors:

This meeting predated the custom of observing the fortnightly recital of the patimokkha. The teaching given by the Buddha that night is known as the ovadapatimokkha and is famous for being a distilled summary of the Buddha’s teachings and his path.

This teaching can be found in the Mahāpadānasutta DN14 and also in the Buddhavagga of the Dhammapada, verses 183-185.

Māgha Pūjā is one of the most important Buddhist festivals of the year and celebrates the ariya sangha. You can find out more about the cultural significance of this day in this [wikipedia article](https://en.wikipedia.org/wiki/M%C4%81gha_P%C5%ABj%C4%81).
18 Likes