I found this video recently. It’s daniel ingram describing his whole mental map of the path to awakening. I won’t lie, it is interesting, but it also seems to be complete nonsense. I was wondering if this is really the way the “progress of insight” mahasi people really think about the practice? I assume this is a little more in depth and out of bounds than they would say, but it is the basic idea isn’t it? You go through the insight knowledges 4 times and then you’re arahant? I’ve always got the sense that this is a real thing that people really do experience, but it isn’t the path to the awakening the buddha described, it’s just some meditative path to something else. On one side I think this is way off and totally useless, and on the other hand I do understand the desire to grasp the actual process to awakening and what that actually means. I just think this is way more technical than the buddha intended. To me, it’s more about lowering your suffering as much as possible and hopefully all the way to zero. If that’s not the direction you’re going then what’s the point?

Mmm… I don’t believe that all those awakening mindmaps floating online are reliable or realistic. How can you systematize a process that relies heavily on your own experiences, motivation, wisdom, etc., in relation to Dhamma?

The person you are referring to has been discussed about extensively on forums for years and should be treated with a great deal of skepticism, if he must be considered at all.

Well I couldn’t agree more, but the issue is that the problem extends far wider, this is only the worst case scenario. I think the entire progress of insight method is flawed. So it isn’t just this guy, but practically speaking, the entire mahasi tradition. Now that’s not to say it can’t be useful to someone who is aware of these flaws and wants to throw some of it into their own practices; only that it’s leading so many people down a path that’s seemingly productive because they’ve mapped out the entire process (insight knowledges), but ultimately leads to nowhere if it’s the only method used.

The problem doesn’t extend wider unless you chose to make it wider, which I don’t think you should, especially not based on this source material.

Well, the first thing is that these maps are based on the Visuddhimagga , which to say the least includes later innovations and elaborations.

For example, the Patisambhidamagga and the Vimuttimagga only have 6 ñāṇas. Also the idea that you “cycle” through the ñāṇas is not based on the suttas or other early material (edit: I’m trying to remember just where I read this but I’m coming up short, if anyone can point out a source I’d appreciate it).

I remember when I was working on creating this wiki article a few years back and realizing that all these stages of insight stuff from the Vism is way more complex than it needs to be and it just shows the Abhidhamma tendency for conceptual proliferation. I mean, just look at the stages listed from the Mahā-vibhāṣa!

The Vipassanā-ñāṇas (Pali, Sanskrit: Vipaśyanā-jñāna) or insight knowledges are various stages that a practitioner of Buddhist Vipassanā ("insight", "clear-seeing") meditation is said to pass through on the way to nibbana. This "progress of insight" (Visuddhiñana-katha) is outlined in various traditional Theravada Buddhist commentary texts such as the Patisambhidamagga, the Vimuttimagga and the Visuddhimagga. In Sarvastivadin abhidharma texts, the "path of insight" (darśana-mārga) one of the Th...

Anyways, probably best not to worry about this too much and just practice and see how things unfold.

Edit 2: If you want a “progressive” model to follow based on the EBTs that’s probably a bit more messy because there are various suttas that outline dependent origination leading to liberation with different ‘steps’. For more on this, I recommend this page:

His essay ‘The Spiral Path or Lokuttara Paṭiccasamuppāda’ recommends AN 11.2 as a common progressive model. And he has a nice map. 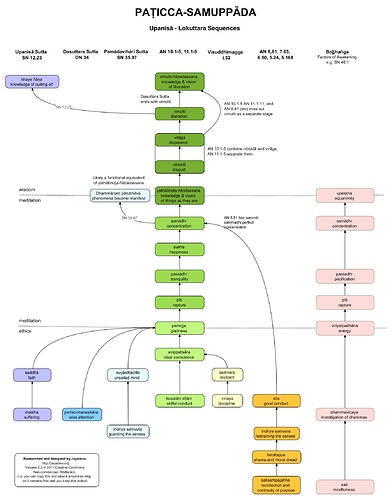 I don’t know much about Daniel Ingram and his approach, but you might find these two articles by Ven. Analayo useful. They investigate the basis for the progress of insight model.

The Seven Stages of Purification in Comparative Perspective (13 pages)

The path is letting go: a gradual relinquishing of the attachments that define the mind. I don’t see how one can make much progress in letting go if one is spening a great deal of time thinking about externalized intellectual models of what happens to a person along the path.

Thank you! I can’t wait to read these.

Agreed, but I also think it’s completely impossible without developing concentration. I honestly think dry-insight is not a workable model, and at the end of the day, a dead end. To be fair though, I don’t have enough experience with advanced practitioners of it to be sure.

I have head so called ‘dry-insight’ practitioners might end up developing jhana eventually, as they have mindfulness (which leads to development of samadhi), though unintended. This might be in line with the below sutta:

"Then there is the case where a monk has developed tranquillity preceded by insight. AN4.170

True Total Nonsense requires a lot of skill.
The wise know that it usually takes a genius to be %100 (totally) wrong.