Trace of real teachings of Buddha

So here we have a interesting sutta

This is Patala Sutta. Patala is part of the old Hindu cosmology. Patala

Monks, when an uninstructed run-of-the-mill person makes the statement, ‘There is a bottomless chasm in the ocean,’ he is talking about something that doesn’t exist, that can’t be found. The word ‘bottomless chasm’ is actually a designation for painful bodily feeling.

Whoever can’t endure them
once they’ve arisen —
painful bodily feelings
that could kill living beings —
who trembles at their touch,
who cries & wails,
a weakling with no resilience:
he hasn’t risen up
out of the bottomless chasm
or even gained
a foothold.

Whoever endures them
once they’ve arisen —
painful bodily feelings
that could kill living beings —
who doesn’t tremble at their touch:
he’s risen up
out of the bottomless chasm,
his foothold is gained. 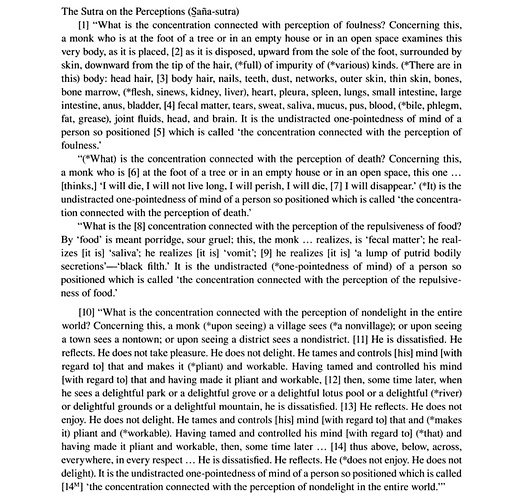 Where in Pali I will find similar? Because it’s strange. It’s even mentioned.
Perceptions

How does the quoted passage makes one feel Buddha’s real intention in using worldly terms?

I ve read it. No such feelings arose in me.

Where in Pali I will find similar? Because it’s strange. It’s even mentioned.
Perceptions

Yes, the practices are named in several suttas of the SN and AN, and then described in detail in the Dutiyasaññāsutta.

Maybe feeling is not a correct word. Excuse my English.

But it seems to me that this text using a term to refer to painful body feeling. I found another example in samyutta that does it also.

The seer has crossed the abyss,
with it’s one root, two whirlpools,
Three stains, five extensions,
An ocean with twelve eddies.

I did see that already. But I am looking for one similar. I wonder if this Gandhara is a lost teaching. Because the part of nondelight seems something Buddha taught to monks to train them while going almsround. I didn’t even find this kind of writing in Vimuttimagga. I searched but found another type of training.

Because the part of nondelight seems something Buddha taught to monks to train them while going almsround.

If it’s specifically that part of the sutta that interests you, you might like to compare the first part of the paragraph with the opening of the Cūḷasuññatasutta, MN 121.

As for the next part, I’m not quite sure. It has a familiar air to it, but I can’t immediately think of a parallel.

I read. Thanks. But it seems we can’t come close that part. It really seems a important training. Even the perception of death is more direct. While in nikayas the monks response to Buddha that they practice it in a different sentence. Things like: if they have practiced in good in Buddha teaching they have done enough. It doesn’t seem mindfulness of death. If you read this, it really makes your mind accept the fact that death will be your end. And the part I’m interested is a wonderful practice. It might be what is meant with voidness. Coming from the word perception which is empty. So if you in village a non-village. Meaning seeing perception as a dream or illusion. Not really being there. Empty. So voidness. Please help me find a complete translation. It seems it was longer. This is just incomplete fragment

Now what, Ānanda, is the perception >of non-delight in the whole world?

Here, Ānanda, a monk in regard to >whatever in the world are selfish >means and attachments, or mental >determinations, settled beliefs, and >tendencies, giving these up, not being >attached, he abstains (from them). 11

This, Ānanda, is the perception of non->delight in the whole world.

But no mention of how to practice it. But a village is attachment. So by seeing it as nondelight is trying to be unattached

Please tell me how to extinguish it,
Out of compassion, O Gotama.

Turn away from the sign of beauty
Provocative of sensual lust

One possessing the triple knowledge,
Peaceful, with being all destroyed:
Know him thus, O Vāseṭṭha, “As Brahmā and Sakka for those who understand.

moghar:
The Sakyan I’ve requested twice but the Seer has not replied;
I have heard tell that questioned thrice,
a Sage divine explains.
I do not understand the view
of the renowned Gotama
upon this world, the other world,
on Brahma’s realm, the deva’s world.

So to the One of vision supreme,
with this query have I come:
how should one regard the world
that the Death-king sees one not?

Be ever mindful, Mogharāja, and as empty, view the world,
with view of self pulled up,
and thus crossed over death—
who sees the world like this
the King of Death sees not

This example of Question to be put aside.

It’s not directly the question but if you read good he responds to everything but he says there needs to be no view. So actually view that things exist or not . And worries about what will happen to “self” after life. Any view. We need to empty mind of constant mental habit. Of making views

Notice how this must be a later text.It even has the typical ending of someone showing faith.

But Buddha can’t go from saying not to have a view of self. To responding who will go to Brahmā world. Which question was saying about self.

māgha
Who can be cleansed, released and Awakened?
With what does the self to the Brahma-world go?
O Sage, when asked reply to me—one who doesn’t know— for the Radiant I’ve seen with my eyes as Brahmā today and it’s true that you’re the same as Brahmā for us.
In the Brahma-world,
how does one arise, O Refulgent One?

The sacrificiant who achieves triple success in sacrifice, achieves their results through such gift-worthy ones; so perfected in sacrifice
and complying with others’ requests,
that one arises, I say, within the Brahma-world.

When this was said the young brahmin Māgha said to the Radiant One: “Magnificent, Master Gotama! The Dharma has been clarified by Master Gotama in many ways, as though he was righting what was overthrown, revealing what was hidden, showing the way to one who was lost, or holding a lamp in the dark so that those with eyes can see forms. I go for Refuge to Master Gotama, to the Dharma and to the Saṅgha. May Master Gotama remember me as a layman who from today has Gone for Refuge for life.

Buddha:
Know ignorance as “head”,
gnosis as that which “splits the head”,
with mindfulness, meditation, faith
by determination, effort too.

Later tradition really meant it as a curse in Buddhism if you tell a lie. And Buddha saying a person head will split if he tell a lie etc to Buddha or disciples