So I am compiling Sutras/Suttas that according to various scholars, Nagarjuna is citing. Kind of like an Upayika for Nagarjuna, but with all of the parallels. But this is turning out to be a bigger nightmare than I thought, because the citations in some of these secondary scholarship are very ambiguous. So maybe y’all can help? I figured that some of these issues will crop up for multiple authors, so I will make multiple entries on this thread as I come across them.

So here is the first author I am working with. McCagney, Nancy. 1997. Nāgārjuna and the Philosophy of Openness. Rowman and Littlefield Publishers. [all typos are my own as I had to manually type all of the quotes]?

“He [Nagarjuna] does, however, refer to Early Buddhist texts, especially the Nidāna, Kātyāyanāvavāda, Acelakāśyapa, and Anavarāgra Sūtras in the Samyukta Āgama (Pāli, Nikāya) and also the Brahmajala Sūtra and the Dhātavibhanga Sūtra [sic] in the Madhyama Āgama (*Nikāya).” McCagney, p. 1.

So of course I found the Katyaya, Acela, Brahma and Dhatu. Those are easy please. But where is this Nidana and Anavaragra?

Some further clues for what she called the Anavaragra Sutra, is a citation:

Nagarjuna again reaffirms the original teachings of Gautama in quoting the Anavarāgra Samyukta: ‘The Great Sage has said, ‘the prior limit of samsāra, without beginning or end, is unknown, for indeed, there is no beginning or end’” [MMK (Skt.) XI.I]. McCagney, p. 13.

Here is the Sanskrit for this verse:

Okay, so I did track down the Pali for anavaragra, which is anamatagga. So I did a search of that word and looked up each of their parallels to see if I find a Sanskrit Sutra by that name (is she back translating from Chinese?) or is she referring to an entire section of the SA (again backtracking from the Chinese) and not an individual Sutra?

So here is one Pali citation that comes close,

But this sutta has no Sanskrit parallels listed. And while my Pali and Sanskrit are barely existant, these don’t look that close to me. Note I didn’t find a single SA Sanskrit text coming close to Nagarjuna’s citation searching Sutta central for “anavaragra.” Nor I did I find any Sanskrit sutra containing the phrase “Saṃsāro ‘navarāgro.”

So next I turned to Kalapahuna for clues in his commentary on this verse. He doesn’t mention the existence of an Anavaragra Sutra. But he does point to a phrase with multiple citations in the Pali canon. The stalk phrase Kalapahuna refers to is the same one as the Pali I cited above:

So here is mystery #1 to be solved. So either McCagney is making up the existence of a sutra that doesn’t exist and Nagarjuna is in fact referencing a whole family of sutras (like the ones mentioned above) and not citing one word for word—or there is a sutra out there that I can’t track down that this is a direct citation of.

I will end this puzzle for now and continue on this thread with future puzzles.

Btw. Here is a work in progress table of contents of what I am working on: 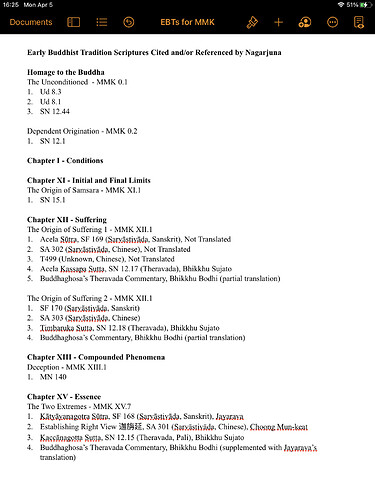 Some further clues for what she called the Anavaragra Sutra, is a citation:

I would look through SN 15 for starters. That’s the topic of that samyutta. There’s a parallel samyukta in SA as well, but it’s not translated yet. Another possibility that occurs to me is the opening of MA 51, which has parallels in Pali at AN 10.61-62, but it’s not exactly the same quote. It may be that the Pali has the first half of the Skt quote but not the rest. It happens like that often enough to be expected.

@cdpatton, Speaking of which, the Chinese version of that verse goes:

The great sage has said,
That no original limit is conceivable.
Birth and death has no beginning,
And likewise will have no end.
— translated by Christopher Bocking

I don’t know if having the Chinese version is useful for tracking down the citation in the Chinese Agamas, since the translators are probably different. But thought I may add this here.

A quick text search doesn’t find any verbatim quotes in the Agamas that literally say “Samsara is without beginning or end,” but the verse is probably paraphrasing. It may be sourced from a couple different texts.

One thing I’ve found is that this expression occurs in the Mahavastu’s account of the Buddha’s enlightenment. See Vol. III, p. 269 of the Jones translation. So, parallels of that story is another thing to consider.

Oh interesting. If we turn to Budhaghosa’s commentary (Bhikkhu bodhi’s footnote to this exact line for SN 15.1), we get “no beginning or no end”:

“Anamataggo ’yaṃ bhikkhave saṃsāro. Spk resolves anamatagga into anu amatagga, explaining: ‘Even if it should be pursued by knowledge for a hundred or a thousand years, it would be with unthought-of beginning, with unknown beginning (vassasataṃ vassasahassaṃ ñāṇena anugantvā pi amataggo aviditaggo). It wouldn’t be possible to know its beginning from here or from there; the meaning is that it is without a delimiting first or last point. Saṃsāra is the uninterruptedly occurring succession of the aggregates, etc. (khandhādīnaṃ avicchinnappavattā paṭipāṭi).’
The BHS equivalent of anamatagga is anavarāgra (e.g., at Mvu I 34,7), “without lower or upper limit.” For various explanations, see CPD, s.v. an-amat’-agga.” (Ft #254)

Here is how he translates the Pali in the Sutta however:

this saṃsāra is without discoverable
beginning. A first point is not discerned of beings roaming and wandering…” SN15.1. Translated by Bhikkhu Bodhi.

So Kalapahuna’s translation of that Pali phrase clearly incorporates the commentary (and is closer aligned to the Sanskrit cited by Nagarjuna). Which I will requote:

“Inconceivable is the beginning of this life-process. The prior end is not evident”

So either McCagney is making up the existence of a sutra

It’s always a pain when scholars don’t reference properly. I would go to her source, which is Warder’s article “Is Nagarjuna a Mahayanist?”