Trillions Upon Trillions of Viruses Fall From the Sky Each Day 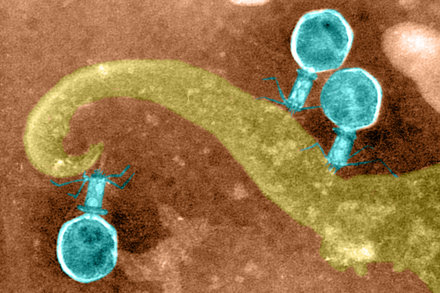 Trillions Upon Trillions of Viruses Fall From the Sky Each Day

Viruses shape the ecology of the planet, but scientists still have only a rudimentary understanding of the microbial impacts on animals, plants and ecosystems.

A good video which adds to the ideas posited by the article. Viruses are indeed quite amazing.

What I like most about about viruses (weird statement i know) is that they are not technically living beings. They interact with organisms, but most biologists don’t believe they belong in the field of “biology” because “bio” suggests they are living. They act as “fragments” of living things, or just as conduits of genetic information. Weird, huh?

Which is truly amazing, as they are very specific and prolific killers which help shape the planet’s ecology, yet they seemingly have no faculties to accomplish this task other than sheer volume, it seems. Perhaps that’s why @cjmacie added the post script which said: “devas?”

Maybe they’re just “entities”? (The deva idea came up from their being in the “heavenly realms”, so to speak; but viruses aren’t living beings like devas.)

Noteworthy our conditioning to consider viruses as “bad” – probably as they are popularly known as causing diseases, from reductionist science’s penchant for jumping to premature conclusions. The article here, as well as other current news items such as the “micro biome”, points us in the direction of seeing a larger picture as to the inter-related functioning of all aspects of the ecology, beyond the bias of self-centered human interests.