Trying to identify some photos, need your help

I’m trying to pin down exactly what these photos are trying to represent. You can find them, along with most of the others in the collection on this page.

I should say that in general, there are stories that are found both in the suttas and the commentaries, if that helps. Also that there are usually good clues as to what the story is. But for these I am stumped. 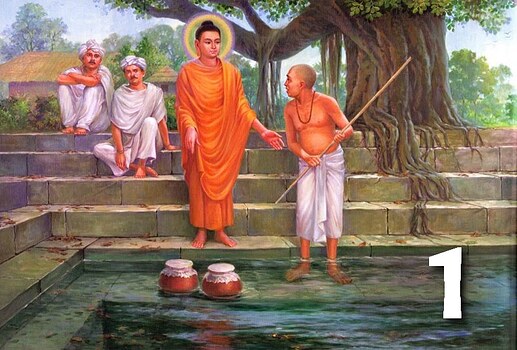 With many of the photos you can more easily guess because of where they fall in the order of the whole collection. But this one comes in a section of stories that happen at any time in the Buddha’s life. I can’t figure out if there is something in the pots other than water.

2 Line in the sand 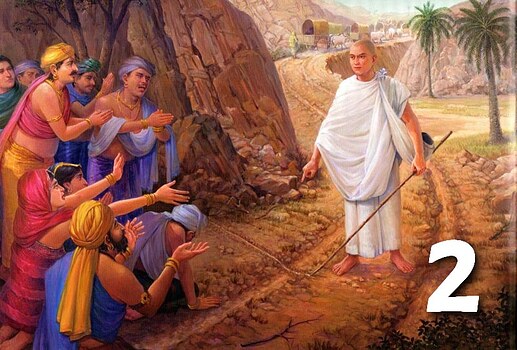 So many clues here, but I can’t figure it out. A lay disciple telling his family not to follow him?

3 Monk begging at the well 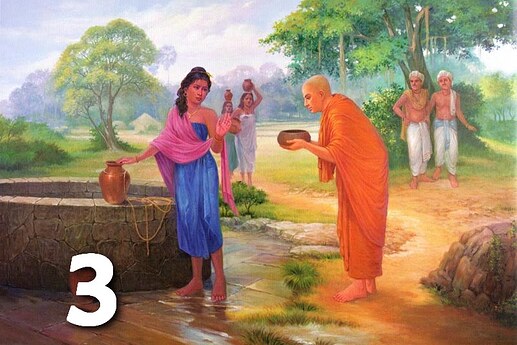 4 At a dana with a broken something? 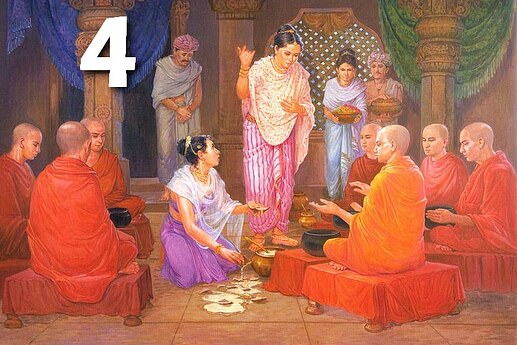 a66-4800×535 114 KB
Looks like a house dana. Is that a broken pot? Where is the standing woman pointing? None of the monks are the Buddha. Who is the man in the background looking sad?

Any help is welcome.

EDIT: I would also ask that the discussion try to keep closely to identifying the photos, not general discussions.

Is he asking for water? Why ask?

Not able to get the exact suttas as search is down, but I have the following in mind…

Photo 1 - SN42.6 The discourse given by the Buddha to the brahmins regarding the futility of prayers in taking their departed relatives to heaven. The Buddha compares their departed relatives past deeds to the contents of the water pots. When the pots are immersed in water and broken, good deeds cause one to rise up automatically, just like ghee while bad deeds take the departed to hell, just like (?sand). Also consider SN55.21.

Photo 3 - This is the story of Ananda requesting water from the lower caste girl (Pakati, daughter of the Matangas) at the well. She says that she is a lower caste, he replies that he did not ask her caste, he asked for water. She falls in love with him and follows him to the Buddha who clarifies to her that it is the qualities Ananda displayed that she loves, not the person. She then goes forth.

Photo 4 - The sutta where ?sariputta is called to a dana at the house of ?visakha and the maid drops a pot.

For number 4, could it be this jataka? It’s Mallika (not King Pasenadi’s Mallika) SuttaCentral Ja 465 Bhadda-Sala Jataka (search for “Pots are made to be broken”)
It would explain the sad man in the back.

For number three, is that from the Dhammapada commentary? It sounds so familiar, but maybe I’m thinking of Jesus at the well

For number 2, I’m doubtful if it is illustrating a simile. All the other photos are of real events (including a dream).

As far as #1, Are you talking about Asibandhakaputtasutta? I’m also doubtful about this since in the sutta the brahmin comes to see the Buddha, not the Buddha going to see him at a well.

For number 4, could it be this jataka?

For number three, is that from the Dhammapada commentary?

This is the story. I know that I’ve also read it in the suttas, but not able to trace it…

The Woman at the Well

Ananda, the favorite disciple of the Buddha, having been sent by the Lord on a mission, passed by a well near a village, and seeing Pakati, a girl of the Matanga caste, he asked her for water to drink. Pakati said: “Brahman, I am too humble and mean to give you water to drink, do not ask any service of me lest your holiness be contaminated, for I am of low caste.” And Ananda replied: “I ask not for caste but for water”; and the Matanga girl’s heart leaped joyfully and she gave Ananda to drink.

Ananda thanked her and went away; but she followed him at a distance. Having heard that Ananda was a disciple of Gautama Sakyamuni, the girl repaired to the Blessed One and cried: “Lord help me, and let me live in the place where Ananda your disciple dwells, so that I may see him and minister to him, for I love Ananda.” The Blessed One understood the emotions of her heart and he said: "Pakati, your heart is full of love, but you understand not your own sentiments. It is not Ananda that you love, but his kindness. Accept, then, the kindness you have seen him practice to you, and in the humility of your station practice it to others. Verily there is great merit in the generosity of a king when he is kind to a slave; but there is a greater merit in the slave when he ignores the wrongs which he suffers and cherishes kindness and good-will to all mankind. He will cease to hate his oppressors, and even when powerless to resist their usurpation will with compassion pity their arrogance and supercilious demeanor.

“Blessed are you, Pakati, for though you are a Matanga you will be a model for noblemen and noble women. You are of low caste, but Brahmans may learn a lesson from you. Swerve not from the path of justice and righteousness and you will outshine the royal glory of queens on the throne.”

Ja539
The Bodhisatta goes forth, but the people follow him trying to entice him back to the palace…

Even after he had thus spoken the people still followed. Then he said to himself, “They do not wish to return,—I will make them go back”; so when he had gone about half a mile he turned back, and standing in the high road, he asked his ministers, “Whose kingdom is this?” “Thine, O king.” “Then punish whosoever passes over this line,” so saying he drew a line across with his staff. No one was able to violate that line; and the people, standing behind that line, made loud lamentation.

It could also be the Buddha answering Mahanama’s question about rebirth in SN55.21? More likely a similar story in the jatakas, since the remaining photos appear to be drawn from there.

I just realized that #4 is also found in the Dhammapada commentary to verse 47.

This is the story. I know that I’ve also read it in the suttas, but not able to trace it…

Keen to know if anyone else can find it. I’m doubtful that it is in the suttas. There are other situations where someone falls in love with Ananda, but the whole thing doesn’t sound sutta-like. Vinaya? In the story you quote, the Buddha calls her Pakati, but I couldn’t find that in the Dictionary of Pali Proper Names.

Ja539
The Bodhisatta goes forth, but the people follow him trying to entice him back to the palace…

That really sounds like it. However in the whole set, there isn’t another painting that is purely from the Jatakas other than Sumedha.

It could also be the Buddha answering Mahanama’s question about rebirth in SN55.21? More likely a similar story in the jatakas, since the remaining photos appear to be drawn from there.

Hmm. Maybe it’s time to respectfully ask @Dhammanando if he has any idea.

not able to trace it

Good find. I think there can be overlap between the Avadanas and the Pali commentaries. It sounds like it could be in the Pali, but I don’t know where.

Goenkas explanation of these paintings may help 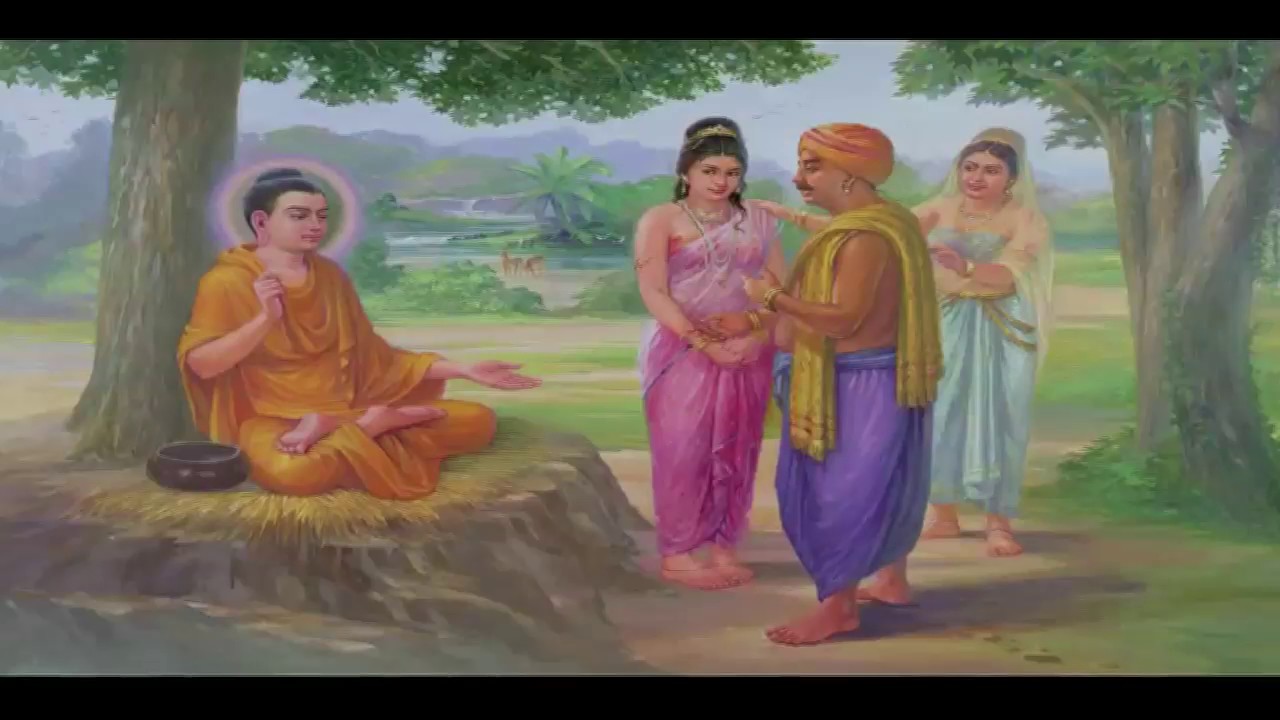 Brilliant! This is great. I found the one about the well. It is the story mentioned above but there is no citation.

OK! So for #1, in the video (at 14:54) He mentions Asibandhakaputtasutta. It’s still odd that the painting doesn’t illustrate the incident as exactly as the other paintings do.

Watching the video, you have to appreciate his staying on message. Almost every image is about Vipashana.

Thank you for this sutta. It does offer a valuable perspective for current world affairs:

What do you think, chief? Take a person who kills living creatures, steals, and commits sexual misconduct. They use speech that’s false, divisive, harsh, or nonsensical. And they’re covetous, malicious, and have wrong view. And a large crowd comes together to offer up prayers and praise, circumambulating them with joined palms and saying: ‘When this person’s body breaks up, after death, may they be reborn in a good place, a heavenly realm!’ What do you think, chief? Would that person be reborn in heaven because of their prayers?”

Second from the left:

It’s interesting because this is the only image from the video that doesn’t seem to exist anywhere online.

I once had a bookmark of all those paintings in high quality years ago, but I lost it since, unfortunately. I think there is one on dhammatalks.net but they’re not high quality. I would enjoy having a book with those pictures printed with the sutta next to them

edit: found the dhammatalks one Life of the Buddha in Pictures

Looks like they’re taken from a book, anyone know the book?

Thanks for the link! This link on the last page links to (unfortunately only some of) the captions for the photos!

I found another style of paintings that you may find interesting too. There are descriptions as well.

It would makes a gorgeous, artistic cartoon film

Here are images of some of the lovely paintings 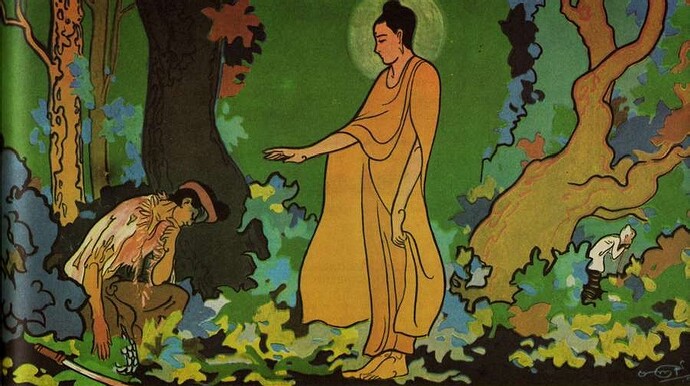 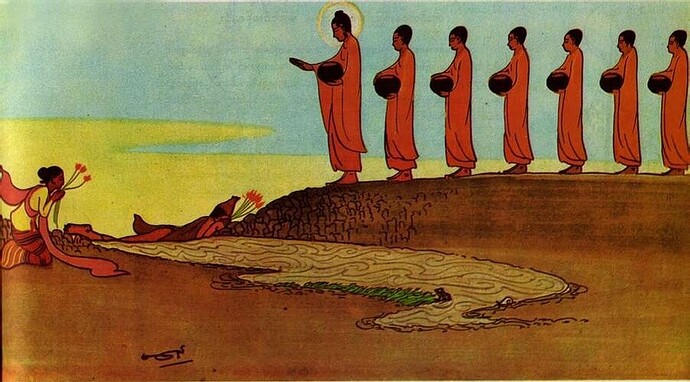