Uposatha Observance Days According to the Suttas & Vinaya

Hello, so I take Uposatha observance very seriously in accordance with the Buddha’s instructions to the Sakyans in AN 10.46. I understand that in the suttas the proper dates of observance is explained according to the ancient Indian lunar calendar & I read a bit about this calendar recently, as well as reading suttas such as SN 10.5 & AN 3.37 where the dates are named.

According to these suttas the observance is to be held on the 8th, 14th, & 15th days of the lunar fortnight. 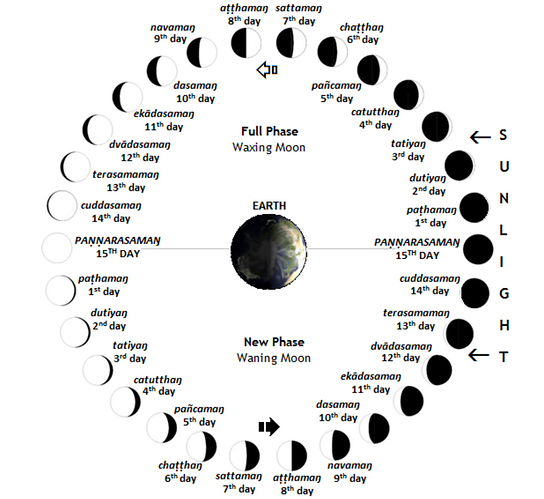 Per my understanding of the Buddhist Calendar, the quarter moon phases always fall on the 8th day. The full moon phase always falls on a 15th day, & the new moon phase falls on either the 14th (in which case the fortnight ends a day early & the lunar month becomes 1 day shorter) or 15th day, alternating between the two from month to month. 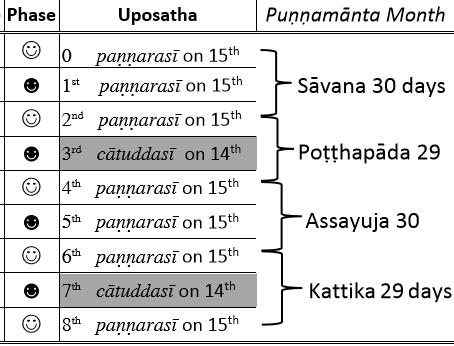 By my understanding the classical observation of the Uposatha falls just on the new moon, quarter moon, & full moon days.

But according to these suttas where it says “fourteenth and fifteenth days”, along with the 8th, it seems to me that the day prior to the full moon should also be observed since it is the 14th day, & on whichever case the new moon day falls on a 15th then the day prior to it, the 14th, should also be observed. None of these suttas say anything like “the fourteenth or the fifteenth days” or anything indicating that the 14th should only be observed when it is the day of the new moon, or that it should be excluded in the case of the fortnight leading up to the full moon.

The suttas also say that on the 8th day the ministers of the 4 Great Kings observe the world to see if humans are living righteously, on the 14th day their sons observe the world, & on the 15th day they themselves do it, & then report it back to the Tāvatiṃsa Devas. This is described in AN 3.37 which I mentioned above. So again this seems to suggest that the 14th day is to be observed even when it does not correspond to one of the lunar phases.

I also found this in the Vinaya.

Now at that time monks, thinking: “The recital of the Pātimokkha on an Observance day is allowed by the Lord,” recited the Pātimokkha three times during the half-month—on the fourteenth, on the fifteenth and on the eighth (days) of the half-month. They told this matter to the Lord. He said:

As far as I can tell this confirms the fact that there’s 3 Uposatha days in a fortnight (except when there is no 15th day), inclusive of the 14th day. So for example the day of the full moon & the day prior to it are both observance days.

Lastly, to make things even more complicated, after saying to observe on the 8th/14th/15th day the suttas go on to say “…and during special fortnights”, or in another translation, “…as well as on the fortnights of special displays”. In an Āgama Sūtra, SA2 46, it says “…as well as on the during the fortnight when the spirits walk”. It seems the relevant pāli word is pāṭihāriyapakkha. Can anyone tell me what all of this refers to?

Can anyone tell me what all of this refers to?

Could you please restate what you mean with ‘all this’?

But generally, yes I also found that the suttas are not clear about the 14th and 15th, if they are both observed in the same fortnight, or alternately. Personally I don’t think that 14 and 15 were originally meant to be observed - unless the three days fall back to pre-Buddhist cultural practices and habits.

Monastics had to have the ability to calculate the next proper Uposatha (if for example they were practicing in the forests) in order to know when to rejoin the Sangha for the ceremonies. But who knows, maybe there were in ancient times frequent miscalculations and groups ended up meeting on both days? Anyhow, the texts present all three days as traditional.

Maybe the responses to my similar question here are helpful.

It seems the relevant pāli word is pāṭihāriyapakkha.

Just found Bingenheimer’s comment on the Sanskrit/Chinese term, not sure how helpful this is in the end:

Could you please restate what you mean with ‘all this’?

I was thinking the same until I saw the Vinaya quote in which the monks considered a fortnight to contain 3 observance days.

On the matter of special observance days, from a Dhammawheel commenter:

There seems to be several explanations in the commentaries (all VBB’s translations):

And during special periods (pātihāriyapakkhañ ca) . Spk explains this as if it meant the days proximate to the Uposatha: “This is said with reference to those who undertake the Uposatha observances on the seventh and ninth of the fortnight too (in addition to the eighth), and who also undertake the practices on the days preceding and following the Uposatha on the fourteenth or fifteenth (the full-moon and new-moon observance days). Further, following the Pavāraṇā day (see n. 513) they observe the Uposatha duties continuously for a fortnight [Spk-pṭ: that is, during the waning fortnight].” Different explanations of the expression pātihāriyapakkha are given at Mp II 234 and Pj II 378.

On the fourteenth, fifteenth, and eighth of the fortnight : having observed the uposatha with its eight factors on these three days; and during special periods .1306 These five months are called the special periods: the month of Āsāḷha, which precedes entry upon the rains retreat, the three months of the rains retreat, and the month of Kattika (following the rains retreat).1307 But others say it is just these three months, Āsāḷha, Kattika, and Phagguna. Still others say they are four additional days in each fortnight, the days preceding and following the actual uposatha days of the fortnight, that is, the thirteenth, the first day of the new fortnight, the seventh, and the ninth. One may accept whichever interpretation one wants.

Pāṭihāriyapakkha . Mp says that they undertake a continuous uposatha observance for the full three months of the rains (antovasse temāsaṃ); if they cannot manage this, they should observe it for a full month after the rains, between the two invitation days, or at least for a two-week period following the first invitation day. The “invitation” (pavāraṇa) is the occasion, at the end of the rains, when bhikkhus and bhikkhunīs “invite” (pavāreti) their fellows to point out any faults in their behavior during the rains. Spk I 307,9–16, commenting on pāṭihāriyapakkha at SN 10:5, I 208,27, explains the term in a broader sense (see CDB p. 480, note 573).

PLEASE can someone give me a very convincing answer on which exact days this is?

btw this calendar looks reliable to me https://forestsangha.org/system/resources/W1siZiIsIjIwMTgvMTEvMDMvNmd6aHN4dWl3cF9mc19jYWxlbmRhcl8yMDE5X3dhbGxfRU5fMjAxN18xMl8xMy5wZGYiXV0/fs-calendar-2019-wall-EN-2017-12-13.pdf?sha=77916adbd273c0f9&fbclid=IwAR3U6JqLgNZoaKUNkN5fBtqznFBSmnadrHqvEfIknYM5agHIosgZ7hXR_ys