The most recent episode of John Oliver’s Last Week Tonight on HBO had its main story on net neutrality. A quick primer can be found in the official youtube video below starting at 2:24. Our new FCC chairman wants change the rules protecting net neutrality, giving ISPs the green light to legally control how they distribute the bandwidth we pay for. John has suggested people contact the FCC to let them know we are opposed to this transfer of power to ISPs: the instructions start at 16:09 in the video. Please do so!

Watch the whole video for a more detailed explanation and to help this all make sense. Be warned: it has foul language and you need a sense of humor.

I fail to see how any internet user without a conflict of interest could be in favor of this suggested power grab. If you are, please share your reasoning why.

How this has to do with Dhamma is that it could very well lead to slower loading of Dhamma related websites on the internet such as this one. Access to broadband is taken for granted by many of us but the fact is many people around the world don’t have the internet, use unreliable satellite connections or are are still using 56k which is abominably slow, like click a link then go make some coffee slow. Even in the wealthy United States, according to the FCC 34 million people don’t have broadband. https://www.fcc.gov/reports-research/reports/broadband-progress-reports/2016-broadband-progress-report

And you can bet your bottom dollar that this is only the first salvo against the free internet. I’m sure these ISPs dream is to get to the point where we have to pay extra simply for the right to access websites out of their ecosystem, i.e. websites that don’t make them money. I’m sure they would like to charge websites who aren’t in their ecosystem a fee for ‘premium’ access to bandwidth and you can be sure SC would fall into this category.

And what the United States does, other countries often follow or are simply coerced by us to play our game. Think about developing countries where there is very little internet access. These people could theoretically be priced out of future access to Dhamma websites. Information is the new oil and those who control it have a lot of power. It is in the financial interest of heartless powerful people to keep much of the world’s population uneducated and trapped in an information Dark Age.

So yeah, this is important. Some of what I’ve written may sound dystopian and unrealistic but anyone who knows the history and pays attention to what is happening in the world knows how quickly the powerful can change societies. It could be the beginning of the end of the free internet as we know it or a clear message from the people that we will not take this BS.

(forgive me for spelling and grammar: on my phone)

Even in the wealthy United States,

The situation with internet speed in the US is known to be highly problematic. It’s extremely slow and expensive compared to other countries. From what I know, this is due to some strange market regulation that lead to monopoly and stop competition.

It looks like you guys aren’t quite number 2 but you are way up there according to this:

This list of countries by Internet connection speed lists the average data transfer rates for Internet access by end-users as published in the report State of the Internet by Akamai Technologies. It represents data for documents stored on Akamai networks.

Either way that is amazing and I am jealous

. You are correct in that it is monopolies over here. I have to pay $70 a month for cable which is like maximum 10 MB download speed even from a super fast server.

Of course SK is on top. Competitive Starcraft over there is like football in the US.

It looks like you guys aren’t quite number 2 but you are way up there according to this:

By many tops Romania was nr 2 after South Korea but others might be rising up and those tops might be old.

I have to pay $70 a month for cable which is like maximum 10 MB download speed even from a super fast server.

I am quite shocked by the 70$ pricetag lol. I expected it to be expensive, but expected something like 25$ especially giving the quality of the service. At 70$ it’s almost 10% of the minimum wage. Next thing you know you have ObamaNetCare act.

I have the 0$ contract for just 100mb cause I am not a programmer or proffesional gamer. I’ve just tested my download speed and it’s 57 download but only 3 upload. (romanian test server) The 1000mb one witch is 10 times faster is only 5-10$ and the minimum wage is 250$. A download/upload speed of 100 or 1000 is not the average but the maximum you can get under optimum conditions for that contract, normally it is around half of that.

Giving these numbers, probably something around 65$ of those 70$ are going to some wiseguy’s account. Out of curiosity, how much does an average TV cable cost ? And does this website for example work well for you or is it lagging ?

How this has to do with Dhamma is that it could very well lead to slower loading of Dhamma related websites on the internet such as this one.

Indeed, thank you for raising this issue. It is something I have watched with concern. The internet has become one of the most fundamental means for human communication, and like the air, or paper, it should not care who uses it. If net neutrality is overturned, it is inevitable that corporate interests will pay to speed up their internet, slowing it down for everyone else. Any personal, community, spiritual, or charitable sites will suffer.

Another concerning issue is the ability of internet providers to block or disable content that the provider deems contrary to its own interests , philosophy, or even religion. Living in the US, I would not put it past some companies to discriminate on speed and content delivery based on religious belief. In the hypothetical, an internet company like Comcast might disable customer access to the NYTimes, based on the NYTimes publishing unfavorable articles about Comcast, or politicians in league with Comcast. The same might be true of evangelicals (who are a powerful lobby in this country) lobbying to hinder delivery of religious content not in synch with their belief systems.

Out of curiosity, how much does an average TV cable cost ? And does this website for example work well for you or is it lagging ?

Depends on the package, these for example. That company is literally the only option for good broadband in my area. The next best option is DSL, which is awfully slow. It really is a monopoly.

This website loads fine and is fast for me. 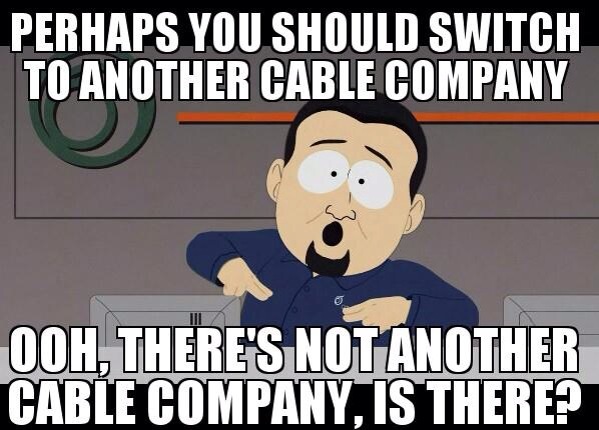 At least it’s not a state monopoly. That’s the only thing worse than a monopoly.

Another concerning issue is the ability of internet providers to block or disable content that the provider deems contrary to its own interests , philosophy, or even religion.

This actually is a reason for hope, because if they do destroy net neutrality, this is the normal thing that will happen. And this means people might protest and reverse it even if it does happen.

I propose these are questions that arise out of Mkolls proposition.

How this has to do with Dhamma is that it could very well lead to slower loading of Dhamma related websites on the internet such as this one.

When I hear this talk of slower and faster without reference to sufficiency or clear consequence … this rings for me with the feeling of greed (or jealousy). I suggest framing the question along lines such as:

These kind of questions invite mature, calm, informed consideration. On the other hand, framing the issue without measures of speed or need invites the listener to jealousy or the their worst imaginings.

If net neutrality is overturned, it is inevitable that corporate interests will pay to speed up their internet, slowing it down for everyone else. Any personal, community, spiritual, or charitable sites will suffer.

I don’t see why it is inevitable. Given the growing capacity of the internet and local services this is not a zero-sum game. That seems analogous to saying that since some people ride first class it makes everyone in coach suffer. Yet the airlines say that first class customers pay more for the seats than than it costs to provide them – so first class customers help make the less expensive coach seats possible.

I used to be jealous of first class passengers. Now as I pass them I say a silent “In gratitude I thank you for paying for part of my ticket.”

The internet has become one of the most fundamental means for human communication, and like the air, or paper, it should not care who uses it.

Assume we provide universal, free access to the internet.

Mkoll, I think these issues – which I have mostly posed as questions – ask for information that is needed to consider the issue further. Do you agree?

Out of curiosity I used some online tools to evaluation download times of the URL suttacentral.net. The tools gave me the option of downloading from various parts of the world and from different ISPs (Internet Service Providers)

I tried this several times with similar results.

I infer from the posts above that this difference should be of some concern.

Depending on the location it rated suttacentral.net as downloading “Faster than 70%” to “Faster than 95 % of tested sites”.

These numbers are roughly what I get from this location.

Very good and interesting points Feynman, I’ve never seen the problem put that way. Another proof that having a larger and more diverse field of members is beneficial for a forum.

Is the mobile market also a monopoly in the US? Mobile internet seems to be a thing in my country, it’s not super fast, but it’s reasonable alternative.

Mobile is still monopolized but it’s not quite as bad as broadband because they’re more spread out—I could get a plan with any of the 4 big ones (ATT, Sprint, Verizon, TMobile) but the only option for good broadband in my area is Comcast. There are also many smaller companies called MVNOs that piggyback off the big 4’s infrastructure. I’ve only ever used the big ones.

Alamogordo /ˌæləməˈɡɔːrdoʊ/ is the seat of Otero County, New Mexico, United States. A city in the Tularosa Basin of the Chihuahuan Desert, it is bordered on the east by the Sacramento Mountains and to the west by Holloman Air Force Base. The population was 30,403 as of the 2010 census. Alamogordo is known for its connection with the Trinity test, the first explosion of an atomic bomb. Humans have lived in the Alamogordo area for at least 11,000 years. The present settlement, established in 18...

Find all of the broadband providers in your area. Coverage maps and Internet service availability - Alamogordo, New Mexico