I’m trying this. While I’m trying it I’m thinking what if that’s what the first Buddha statue was used for. Don’t think people of that time taught about it. But some statue in Gandhara was found with even a hole at the belly. And archeologists says that it was believed that if you put your hand inside you connect with Buddha.

I doubt that Buddha has a frequency because a frequency is dependent on something that can move and vibrate, matter. And I’m a bit tired of mining matter

Just remember that the level where they are still on earth was a frequency. That’s what I meant. The same as if when he was alive. Same as they say when visiting his stupa etc brings blessings

I don’t realize such Frequency Concept exist in Buddha’s Teaching or Early Buddhism but there may be now possible with so many Buddhist Religious Sects.

If the hole is around 2-fingers below the Belly-Button/Umbilicus, the closest one maybe on Accupuncture Concept. In their concept there is a point called Qi-Hai (CV.6) which actually mean The Sea of Qi.

Well I see suttas still showing as if Buddha qi could have healed from far. I posted about it once. Although I posted it’s the faith of the lady. But still it’s very possible that Buddha power healed.

Hi … Yes definitely The Buddha somehow in several occasion shows that he had the magical prowess.

the first Buddha statue was used for

Legend is that that when the Buddha went up to the heavens for a rains to teach, he left behind the first Buddha statue so people would have something to respect in his absence.

But that’s a legend Bhante, rather than fact?

It seems unlikely to be true, given the strictly aniconic art we see in the early archeological record. In all likelihood the story is a myth telling us how to feel about (these new) Buddha statues, rather than a “history” of material “facts” as we conceive of those terms these days. But who knows? I wasn’t there

You are an immortal if you are there, Bhante

some statue in Gandhara was found with even a hole at the belly.

I’m not sure what you mean by the hole in the belly and statue frequencies, but this one is one worthy of admiration 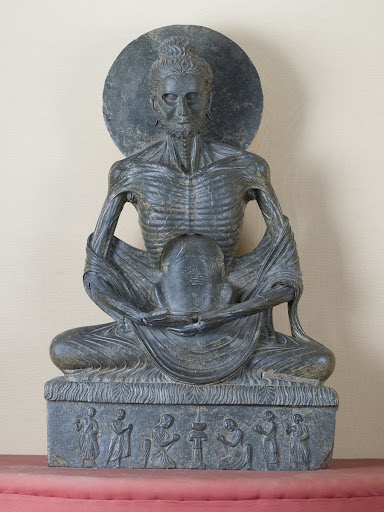 The statue of Fasting Siddhartha ranks not only as the finest specimen of Gandhara Art but also as one of the rarest antiquities of the earliest world. Thi...

(Warning! You can get very distracted/lost on this app btw

Warning! You can get very distracted/lost on this app btw

Good morning,
Just for a quick intermezzo, at least we are not 100% serious.

Of course, I am aware there is always a try to match the real Buddhism concept, not he taught, bit people try to make it looks like. I bet The Buddha never taught anything about Qi or other kind of energy, but yes he did heal some people but we try to believed so based on a match of logic. He just taught us to know and to realize, that’s all.

You are an immortal if you are there, Bhante

Well, some past incarnation of mine was around somewhere at the time… I just don’t remember it

… probably as a fly or something

If people are interested in the early history of the Buddha statue, the book on the subject is “Image Problems” by Robert DeCaroli

The one that seems truth is closer to something that happened on earth.

Actually I think it’s close to Gandhara. The statue had a hole in the belly area.

Edit: like litterly a big round hole almost the size of the stomach area @Ficus

In Sri Lanka there was many faith in the power of Buddha statues. Many cured. The monks blessed most statues. Charged with the connection Sangha had to being in the lineage of Sangha dus the founder. Buddha.

I would assume the early use was for kasina meditation. Some early statues had earth color.

Makes me think about this Oh I forgot to say it’s not that one. A hole through the whole body. Maybe I saw in a book. Hard to find now.