I just wanted to post this here as general FYI/lifehack, if it’s not helpful to you, just leave it. It might be helpful for some people though especially if you live in an area where the adhan AKA muslim call to prayer is broadcast (I know it really cleared things up for me A LOT). Also: you could definitely just do the same calculation yourself without it belonging to any religion.

In MN39, the Buddha instructs monastics to meditate in the first and last watches of the night. This has since gone on to become a source of great confusion, as the manner of calculating the watches has not been fully transmitted.

I know the broadcasting of the adhan (muslim call to prayer) is a controversial topic, which isn’t what I want to discuss. However, it is related to our system because the call to prayer is conveniently also calculated according to the three watches of the night.

(Some people believe than many of the published adhan times are actually off (too early in the morning) by up to 10 minutes- as this is a specialist topic, I don’t want to go into it, but it might be worthwhile keeping in mind.)

Also, this is just generic, I am sure there are different Islamic schools which have actual experts in this topic.

Anyway, from what I have researched, to calculate the watches of the night Islamically:

Tada! Watches of the night solved!

Now someone just needs to make a Buddhist clock app.

Tada! Watches of the night solved!

What do you mean “solved”?

Do you mean Indian/Buddhist tradition does not have a clear notion of what are "watches of the night’?

I think it’s much more likely that the watches of the night (and day) correspond to the time periods delineated by the system of Ayurvedic medicine that were in use when the Buddha was teaching. They don’t have anything to do with the sunrise and sunset, so they are the same year round. Here is a simple explanation: 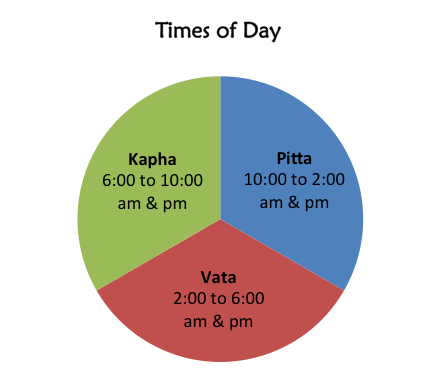 Ayurveda and Cycles of Time: How the Doshas Rule the Day - California College...

There is a natural ebb and flow within the natural world, including within your own body and mind. Vata, Pitta and Kapha are energetic forces that govern the tides of your life, and if you understand these forces, you can tune into the natural...

But I could certainly be missing something.

Recalling my old yoga days, there is also the Indian concept of the Brahma Muhurta (the time of Brahma) which is the period from the last period of the night before sunrise, calculated in different ways from 3:30am to 5:30am depending on sunrise. Some calculate it as precisely beginning 1hr 36mins before sunrise and ending 48 mins before sunrise itself.

This period of night is regarded as Satvic (purity, knowledge, growth, wisdom etc) and associated with spiritual and divine energy which is why it is the time for meditation, chanting and yoga.

The whole day is divided according to the 3 Gunas (Sattva, Rajas, Tamas), with the brahma muhurta starting off with the purity and hope of a new day, slowly changing and getting mixed with various qualities (rajas) eventually heading to darkness (tamas) which is associated with ignorance, sleep and evil.

It is a very nice time of the day for spiritual practice when everything is quiet and calm. But getting up that early is not for everybody.