Variation in Pali paradigms: down to dialect?

One recurring pattern that has really struck me as I have studied Pali is just how much variation there is in all sorts of paradigms. To take a random example (which we happened to be discussing in @johnk’s class tonight), in Gair and Karunatillake’s summary chart of the forms of the demonstrative pronoun ima ‘this, that’, most case/gender combinations have more than one form: 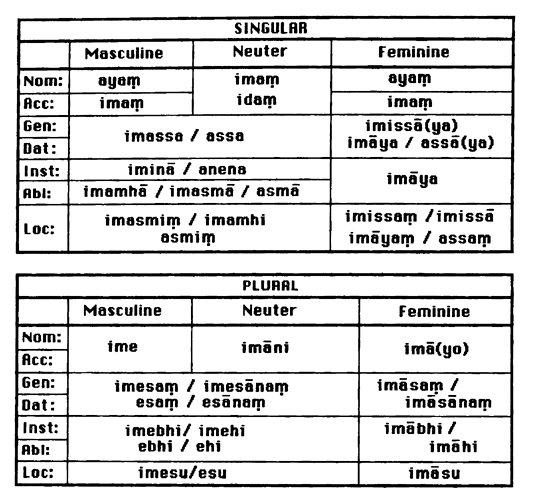 Some of the variation isn’t that shocking, certainly, it’s not hard to imagine how imebhi and imehi would be in variation. But gentive singular imissā and assā, or instrumental singular iminā and anena, for instance, are quite distinct. If there is some phonological or phonetic pattern at work, it’s pretty deep and doesn’t seem terribly predictable.

And of course, this pattern of variation is hardly limited to this particular pronoun — most nominal declensions and many verb conjugations also have this pattern. To my still barely-trained eye, it seems extensive variation is actually the default in most Pali paradigms.

My intuition is that just how much variation there is in the language is unusual. At least, in my limited familiarity with other languages with lots of paradigmatic patterning, you don’t see this much variation within “the same cell,” as it were.

So, here are my questions:

Why is Pali this way?

Is this kind of variation considered evidence for the “Pali as lingua franca” that Gombrich and others have put forward? I don’t recall any mention of this particular fact in his short book, but perhaps I have forgotten.

If it has to do with dialectal variation, do we know what the dialects were?

It would seem to me that if there were some number of dialects involved, then we would expect to see patterns of co-occurrence in the variation. In other words, if you see Dialect A’s instrumental singular in a particular text, you also expect to see that dialect’s ablative plural (or whatever) in that text.

I’m not sure I’ve made myself clear, but it’s something I find myself thinking about pretty much every time I open a Pali grammar book.

Part of the variation you see in the above paradigm is a result of suppletion. This is largely inherited and the same can be observed in Vedic, Old Persian, Avestan etc. Beside that, you can observe some collapse within the case system and analogical formations (again, not unique to Pali).
Basically, there’s a lot going on and mixed up in all of this is, of course, a complex history of oral transmission.

“The idam paradigm is given below. Its declension is somewhat irregular because it is formed from two different stems, i- and a- , both of which also form proximal pro-adverbs (for example, atra and iha both mean “here”, and ataḥ and itaḥ both mean “in this way”).[7] The nominative and accusative forms, except the three singular nominatives, are regularly formed with the stem im- , and the remaining forms from a- ; an extra -n- is infixed should the ending start with a vowel.”

Sanskrit pronouns are declined for case, number, and gender. The pronominal declension applies to a few adjectives as well. Many pronouns have alternative enclitic forms. Sanskrit pronouns in the first and second person (uttamapuruṣa and madhyamapuruṣa, respectively) resemble one another in how they are declined, and similarly do not mark gender. These pronouns have shortened, enclitic forms in the accusative, dative, and genitive cases (in parentheses in the table below). Sanskrit does not h...

The presence of two different stems should explain a lot of the variation, which I doubt is due to having absorbed dialect. The other changes can be accounted for- like you and @Leon have already mentioned- by either two ways of representing the same sound (e.g. ehi/ebhi) or by influence from other declension systems (and possibly also by collapse of cases).

I would like to know how exhaustive the Gair and Karunatillake table is.

During how many centuries was Pali a developing language?
Do all these forms appear in the EBTs?
Are some found only in the more recent commentaries?

@Leon, supplementation obviously has descriptive power, but does it have explanatory power?

@Leon, supplementation obviously has descriptive power, but does it have explanatory power?

Is this a sociolinguistic question? I understand the difference between descriptive and explanatory power, but I’m not quite sure what you’re asking in relation to the above paradigm and suppletion. Could you expand your question a bit for me? Thanks

Do all these forms appear in the EBTs?
Are some found only in the more recent commentaries?

Sorry I wasn’t clear. I don’t see it as a sociolinguistic question. I wanted to make the point that, while suppletion adequately describes what is going on, I don’t see that it explains anything at all about why.

Ah, thanks for clarifying Gillian - I took your rhetorical question and proliferated it into something far more complex