usually designed to be sufficiently bland to not offend anyone.

Clearly that has not worked

Just coming back to this thread to say that here in Malaysia where I’m currently travelling, I’ve seen a lot of Buddhist temples with signs and labels referring to joss sticks and remembered this thread… and the outrage!

Malaysia has Chinese diaspora communities who often practice Taoism alongside Buddhism but these joss stick signs are also in monasteries and temples where there is no overt Taoism.

So, whilst there is obviously a history here, and whilst incense might be a preferable term, I guess I’m saying that given the frequency of use here and by Buddhists elsewhere, there may be Australian Buddhists using it too and therefore perhaps valid reasons that it was picked up and used by the minister’s office.

Hopefully this year Buddhist Councils in Australia will be a bit more on the front foot and let parliamentarians know what kind of message is appropriate. However, given the diversity of our communities and the array of cultural, language and doctrinal variations, I wouldn’t necessarily expect that any brief message can convey everything we would all want it to say. Still, if Australian Buddhists have anything in particular they want to see in a message, DM me and I’ll pass it on through the state and federal Buddhist Council boards that I sit on.

Meanwhile, thinking about syncretism, I found this statue of Guan Yin as a pseudo virgin Mary with child (??) at a roadside shrine quite fascinating. 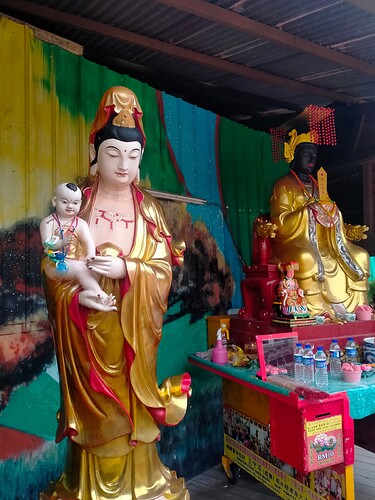 Guan Yin as a pseudo virgin Mary with child (??) at a roadside shrine quite fascinating.

This image predates modern Christianity in China, it isn’t connected to Mary.

That is “Songzi Guanyin”, or child-giving Guan Yin. 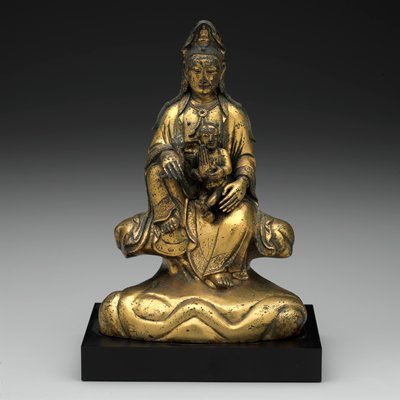 Guanyin, one of the most popular of all Buddhist deities, is shown here holding an infant boy in her lap; she is Songzi, the Child-Giving Guanyin. Male children were extremely important to Confucian family structure. They ensured not only the...

Praying to Guan Yin for children is a very old Chinese practice.

But I like to think of it as just a nice maternal image.

To give another example from Malaysia…the street on which Brickfields temple is located is called “street of the idol-worshippers” in Malay, Jalan Berhala.

The unsuccessful campaign to get the street renamed had been an issue which cropped up in previous newsletters of this group- this street name has never been popular with Buddhists.

So it can be seen clearly that at least one major Malaysian Buddhist group has an issue with being perceived as an idol-worshipping community.

Joss sticks are probably the less obvious/milder end of this issue as the fact that joss means deus is not obvious, but the underlying problem of confusion between religions by outsiders is the same.

it can be seen clearly that at least one major Malaysian Buddhist group has an issue with being perceived as an idol-worshipping community.

I’m staying at the Buddhist Mahavihara, (previously known as Brickfields Buddhist Temple) at the moment and after speaking to the Chief Reverend and the office staff here, they offered a very different view.

Originally the street was known as Temple Street and was later changed to the Malay, Jalan Berhala, after independence from the British. They said the new name has essentially the same meaning as the old. Berhala does not mean “idol worshippers” at all, even though its etymology does relate to “idol”. Rather it is used in the general sense of a place of worship or religious centre, eg Rumah Berhala means simply a place of worship. Importantly, it is not a perjorative term, according to the residents here. In fact, a quick search shows that many Buddhist temples voluntarily use this appellation.

They say the movement to change the name was only to publicly acknowledge the contribution to society made by the previous Chief Reverend, Sri K Dhammananda after his death, for whom they wanted the street to be renamed. There was no problem with the street name itself, they told me, and that this sort of practice is common in Malaysia.

Incidentally, today I met another “Chief Reverend” who also had a title “High Priest of Malaysia” and he also mentioned joss sticks twice! Whilst these sorts of terms aren’t necessarily my cup of tea (high priest is pretty cool though, right?) to go back to my original point, Buddhist communities are using the term Joss stick and so it is understandable that it might pop up in a politician’s message.

Even if the etymology is undesirable we know that language and meaning changes over time. Personally I always felt uncomfortable with “temple” because it conjured up other images in my mind but I guess I’d be facing a losing battle if I decided to fight that one! However I understand your feelings and appreciate the desire for communities to choose the ways they wish to be described or the terms they wish to use, but we still need to respect the terms used by other communities.

Thanks for this info, very interesting! In the Singapore Museum of Asian Civilisations I saw many hybrid Christian/Chinese images which led me to make this mistake, along with my guide who told me it was such but I’m very happy to be corrected!

Same, probably because of Indiana Jones and the Temple of Doom!

Nice to hear from you Bhante, so glad you’re doing well

Indiana Jones and the Temple of Doom

Incidentally, there’s an Ajahn Chah talk where apparently a layperson was telling Ajahn Chah of a place where you can do exactly that, eat monkey brains!