Vinaya itself showing that there is 7 rules added to Pātimokkha?

So I have recently started learning Vinaya a lot in the hope to remember these for future life. There is this I found and in my study I asked a Bhikkhu how much rules there is in Pātimokkha in study. I read introduction to Bhikkhu rules also. So now I know it’s 227. But then in this mentioned in vinaya itself.

So then my mind started to think.

What is this? The vinaya itself saying about 220 rules. Then I thought a lot about what was said about the Sangha split etc. I only know that Sarvāstivāda has 250 rules. They added way much. So I’m maybe these 7 rules that was not supposed to be maybe counted as Pātimokkha recitation and it wrongly called rules? I don’t know.

Because to tell you the truth 7 more is not far from 220.

I know monks are in Vassa but I just made for later before I forget. But others are welcome to comment if you know more.

There are 7 rules called Adhikarana samatha, which dealing with how to solve a dispute rising in monastic community. Perhaps these rules are not rules in sense they are not about a monk’s daily behaviour.

That must be it. Thank you for your reply. As I remember those seems to me to be the ones mentioned to be the causes of schism etc? Reason they where added. But should not be called as rules I think. More like community discipline.

Do you know more?

It’s this? Those don’t seem important to be called rules. I don’t even understand them.

I got the info book already on Pātimokkha. Thanks anyways

Well spotted, it does seem to be the case that the seven adhikaranasamatha were originally not part of the recitation. In fact, at an even earlier date, the sekhiya rules were probably not recited either.

The adhikaranasamatha are not exactly rules, but more guidelines for the Sangha in settling disputes. I think it’d be wrong to say that they were unimportant. In fact they establish a series of crucial principles, such as that every Sangha member must be present when decisions are made. While adding them to the patimokkha is a little incongruous, it does serve to ensure that all the monastics are reminded of these things.

Bhante I have seen in the Chinese Theravada vinaya commentary rules you have shared that these Seven seems to be mentioned also I think. It was the last ones mahakassapa asked and it’s called The 7 precepts to settle a dispute. I am right? I actually don’t understand them.

Notice others are translated as rules. Those precepts. 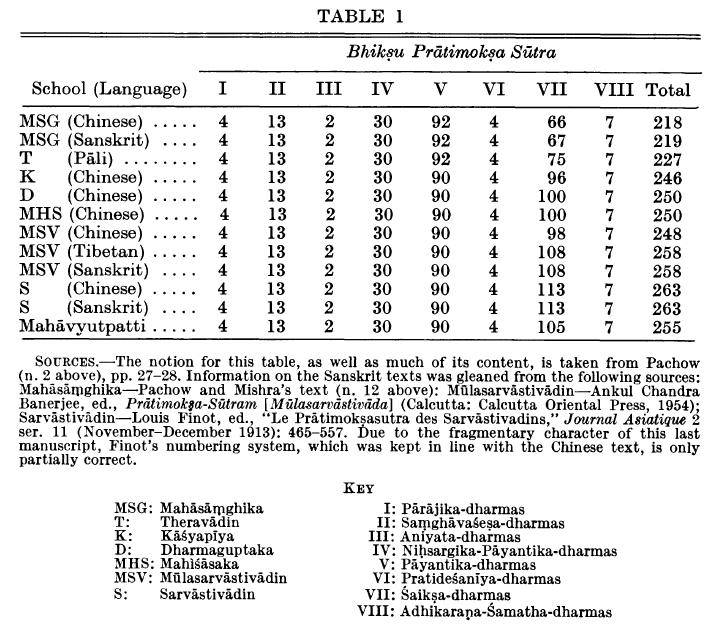 According to Bhante @sujato’s Sects and Sectarianism, early schism is caused by geographical differentiation and later by different interpretation of Dhamma (eq. 5 points of Mahadeva)

Nice graph. I did read that from Bhante Sujato. But how come I read in sutras of sarvastivada always mention 250 rules?

I mean the totals are different now I see better.

In fact, at an even earlier date, the sekhiya rules were probably not recited either.

Do you think? Are these sekhiya rules the minor rules which can be removed as indicated by the Buddha before his passing away?

Your bringing a good question. Since all have it. But it seems they weren’t sure which Buddha meant right? They doubted. But it seems…

since they all kept them.

I’m starting think what the opposite of what is said. MSG was later tradition claiming they are direct line from the Great Sangha of the first council. More like how Theravada used Theravada. But is interesting is that I see that probably by the time they where created original Sangha died already, meaning whatever was created after could be the case that they have less rules because they wanted to be lax. It’s a possibility. Since everyone has more and only one has low. Yeah right.

I’m starting to think like Buddhavamsa. It’s probably a Sangha trying to be accepted more.

I read also there is total corrupted version of MSG in China. Many Mahayana stuff. Can we trust Chinese. Maybe didn’t write down all the rules also