Tomorrow we are going to release another small update for our TTS app SC-Voice. We’ll let you know when it is done.

Sadhu! once more to yourself and @karl_lew

I am so jealous of your sane release cycle! Hopefully once we get our big update done we can release more regularly.

Meanwhile, just a heads up. Given the mature and excellent state of Voice, I’m redesigning SC to give it more prominence. We’ll still see the speaker icons in the suttaplexs just as before, but I’m also adding Voice to the main dropdown menu, as well as to a card on the Home page. there it will appear alongside other related projects.

One thing I was going to ask: on Voice, there is a black and white SC logo. is that what you’d like to use as the official Voice logo?

We’ll still see the speaker icons in the suttaplexs just as before, but I’m also adding Voice to the main dropdown menu, as well as to a card on the Home page. there it will appear alongside other related projects.

This will allow more people to find Voice, and hopefully it will be of help to many!

One thing I was going to ask: on Voice, there is a black and white SC logo. is that what you’d like to use as the official Voice logo?

The full logo is actually this:

Although we still didn’t manage to make it look even in all browsers—Firefox shows it like this:

But for the purpose you mention, I think the black and white flower is great. Unless @karl_lew thinks otherwise …

redesigning SC to give it more prominence.

Thank you, Bhante. This will help a lot with search engine optimization.

there is a black and white SC logo.

Color is used exclusively in Voice for focus/accent. In this case, the light brown SuttaCentral of the full logo is actually the most important part of the logo since it provides the key root link back to SuttaCentral. The Dhamma Wheel icon link merely returns to a blank Voice home page.

For those with visual disabilities the use of color is advantageous for focus/accent. We typically turn up the brightness on our monitors to make the best use of the photons we can glean. Too much color or even white pixels is an assault on the eyes. White on black is actually painful to me, for example. With color restraint and a black background, any use of color facilitates visual scanning. The joy of color is replaced with simple gratitude for sight itself.

since it provides the key root link back to SuttaCentral

I’ve never seen a link there …

We have links to SuttaCentral within each Sutta in the “more” menu, though.

I’ve never seen a link there …

Ack! You’re right. The link is in my head and is broken.

The link is in my head

If your head thinks it is a good idea to have it, we should perhaps build it.

Thanks for adding the link—rocket fast!

The link used to be there. A distant Karl just removed it because the formatting was vexing. Even now it is not quite right but it is workable.

Anna has now been successfully released.

There’s not much difference in functionality, compared to the previous version.

While Karl is working hard on building a search plugin module for flexible use on various websites—not only in Voice—there are a few small benefits that can already be applied to Voice right now, including some pronunciation issues. Apart from that, this update releases new and updated content, both for English and German translations, and also new examples in both languages.

We are happy to announce that Voice has now Bhante @sujato’s recent translations of Khuddaka Nikaya texts, such as the Khuddakapatha (which includes the Metta Sutta), the Dhammapada, the Udana, and the Itivuttaka. A great Sadhu to Bhante! And thank you for allowing Voice to show these texts while SuttaCentral is still working hard to complete their pending update.

The Khuddakapatha has also been added to the German translations, as well as DN 25, DN 34, and SN 56.47-48. Edits in existing translations are always ongoing.

For details of the release see here.

In the background, @Kaz has already started building a list of Japanese examples, based on her own translations, as a preparation for implementing this language into Voice. At the same time, @Madhu is working on translating the About Voice pages into Sinhalese. Thank you so much, you are making Voice a more colorful and diverse application!

Bhante Sujato, Anagarika Sabbamitta, Kaz, Madhu, thank you all for all the new content. It is quite the treat to have new Dhamma paths for us all to explore.

Thank you so much Karl, it is an honor to work with such a great team.

Meanwhile, the new SC Home page is live on staging.

I’m using a “speaker” as the Voice logo for now. I should change it to the “official” black and white logo. I did try, but couldn’t get it to show up! Anyway I think it looks fine for now.

Note that we have a proper black and white lotus SVG if you want to use it.

the new SC Home page is live on staging

Thank you all for your continuous and very professional work. Sadhu.

I did try, but couldn’t get it to show up!

@sujato Bhante, on the SC staging site, I couldn’t see your translations listed. I wonder that’s why the logo didn’t come up. Even on the current SC, that seems to be the case. 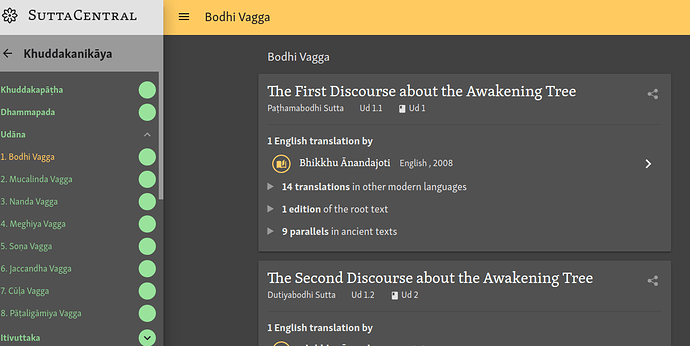 don’t worry, we’re working on it.