Was Buddha an irresponsible husband and a father?

Also, the Buddha definitely seems to have knowledge of brahmanical doctrines, so I’m not sure that brahamanism is to alien to the area.

It’s clear from non-Buddhist and Buddhist sources that Brahmanism was still expanding towards the East. E.g. one of the latest pre-Buddhist texts, Śatapatha Brahmana 1.4.1.14-17, speaks of the eastward expansion of Brahmins. Or some suttas speak of ‘Brahmins of the West’ who are able to guide people to heaven. You have to keep in mind that the suttas contain text elements from the Buddha’s time up until 200-300 years later when Brahmanism was fully established in Kosala and Magadha and a full-fledged economic and religious competition was solidified.

(Yet it is not clear to me why they would invent a story of a son unless they were convinced it was true.)

In a way I guess they didn’t need to invent it. Enlightened monastics used to say that they are ‘children of the Buddha, born of his mouth’. The only thing necessary is a guru from the Rahula lineage to take it literally, tell a pedagogic narrative, and this to be passed on.

On the other hand, it seems there were a lot of rājās in India at the time.

I would repeat what I think you imply: We shouldn’t make the mistake to project what we call today a king or queen on the Buddha’s time. People didn’t have fancy maps nor the internet. Why wouldn’t you call yourself a ‘king’ if you ruled a strategically important area 100x100 km. Denmark (forgetting Greenland) still has a king…

Large parts of the Vinaya are relatively late.

Hi bhajte couldnyou please expand on this a little bit? Which parts and how late?

That, Namuci, is your army,
the Dark One’s commando force.
A coward can’t defeat it,
but one having defeated it
gains bliss.
Do I carry muñja grass?
I spit on my life.
Death in battle woud be better for me
than that I, defeated,
survive.

If one has read and in my opinion, fully understood the Rahula Sutta, one wouldn’t find a question like that to fit his wholehearted fatherness

Have you had look at this? If you have any follow-up questions, you are most welcome to ask.

. Jokes apart he was after all a prutagjana. A little irresponsibility is allowable for the greater good. Who knows he could have been quite traumatised and depressed seeing suffering after being mollicoddled for years and needed to get out as fast as possible. As for people criticising him do they even know what his dhamma findings are? We can use “Do you even dependent origination bro” on those critics of the greatest wise person in all the worlds.

Recently, a Sinhala movie called Yasodara was released. They used a lyric stated as " She is the Buddha’s chastity", which is wrong.
The question above sounds the same.

Was Buddha an irresponsible husband and a father?

This is not the way that you should ask the question!. In the western perspective, this may be considered right, but the bodhisatta and the Buddha are not the same. Buddha was passionless (Vītarāgī)and had no bonds with others.
Therefore, you would rather ask the question as,
Was Bodhisatta (siddarta) an irresponsible husband and a father?

Its interesting to question the question. So reading this last post I have a question

As an unenlightened being, is it worth risking everything to find what nobody had yet found at the time?

Which we can further simplify:

Can you or should you give up everything you have and are in search for what most human beings are searching for happiness, freedom from bondage, release?

I hope you all would excuse me for digging up this old thread, but recently, I came across this quite old article 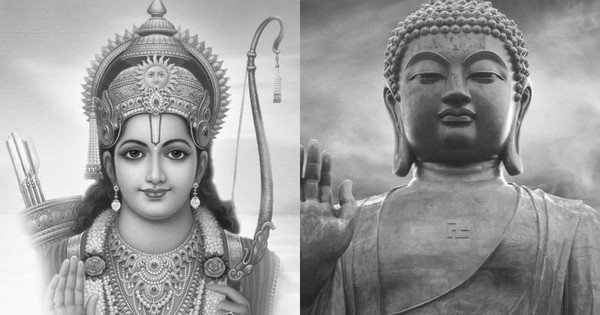 Why is Ram misogynist, but not the Buddha?

The world is conditioned to see the Ramayana and Manu-Smriti as anti-women, but not the Buddhist lore.


Although its quite unfactual and misleading, one phrase which struck me was this:

We can trace, at least one major tributary of this idea (i.e. misogyny) to the Vinaya Pitaka of the Buddha, who abandoned his wife, without her consent.
(Emphasis mine)

Which led me here to D&D to verify if it’s indeed true, which Ven. @Brahmali clarified:

I must admit I was at a loss of words whenever someone brought up the topic of Buddha abandoning his family, which many say was selfish (and that too without even informing them). Thankfully, this thread puts that objection to rest

One dark night,
fired with love’s urgent longings
—ah, the sheer grace!—
I went out unseen,
my house being now all stilled.
In darkness, and secure,
by the secret ladder, disguised,
—ah, the sheer grace!—
in darkness and concealment,
my house being now all stilled.
On that glad night, in secret,
for no one saw me,
nor did I look at anything,
with no other light or guide
than the one that burned in my heart.

Could you please specify the source of this? Is it from the EBTs?

Could you please specify the source of this?

Its from St John of the Cross - The Dark night , and not EBT at all.

IMO …This entire idea of sneaking out in the middle of the night comes from the romanticized novels/ translations of the late 19th and early 20th century, such as Edwin Arnold’s “The light of Asia” and Herman Hesse’s “Siddhartha” which became extremely popular with the in-crowd of that time.

IMO …This entire idea of sneaking out in the middle of the night comes from the romanticized novels/ translations of the late 19th and early 20th century, such as Edwin Arnold’s “The light of Asia” and Herman Hesse’s “Siddhartha” which became extremely popular with the in-crowd of that time.

Though this episode isn’t in the EBTs, it is actually a stock feature of later Indian Buddha biographies. For example, the Pali Nidānakathā.

The Nidānakathā, or Introduction to the Jātaka Stories published on Ancient-Buddhist-Texts.net: Why you should read it Translations

Recently Bhante Ānandajoti re-published T. W. Rhys Davids translation of the commentarial introduction to the Jātakatthavaṇṇanā. You can read it on line or download it as a pdf or ebook. What it is: This is the introduction found in the the commentary to the Jatakas. So a translation from Pāli in to English. Why you should read it: If you only read the Suttas and the Vinaya, you may be puzzled as to where all the other stories are from the life of the Buddha and Bodhisatta. Well, here they a…

What does come from the EBTs is the detail about going forth because of samvega and disgust arising at the sight of sleeping nautch girls in the aftermath of a soiree. The difference is that in the canonical texts this happens to Yasa, not the Bodhisatta.

IMO, it’s not relevant to apply the mores of the modern nuclear family to the age of the Buddha. The nuclear family developed in the 20th century.
In any form of extended or clan society there are sure to be parent substitutes around, and servants and slaves in wealthy households as well. The Buddha’s father most likely saw himself as responsible for his young son’s wife and child, whether Gottama was at home or gone.

In any form of extended or clan society there are sure to be parent substitutes around, and servants and slaves in wealthy households as well.

Indeed, but we also see in some texts that this family system did not prevent Suppabuddha, the father of Buddha’s ex-wife from bearing a grudge against him. Clearly, they weren’t used to such situations or held renunciation in high regard.

What does come from the EBTs is the detail about going forth because of samvega and disgust arising at the sight of sleeping nautch girls in the aftermath of a soiree. The difference is that in the canonical texts this happens to Yasa, not the Bodhisatta.

Certainly Bhante.
This is just speculative, but the later biographies seem to use
1.) The episode of four sights from the story of previous Buddha (Vipassi ?)
and
2.) Yasa’s account of going forth after getting disenchanted with sensuality (edit: unbeknownst to anyone in the dark of the night )
to fill the gaps in the story of Buddha’s renunciation. The sutta reference where the Buddha clearly says that during his going forth, his parents were present and crying got totally sidelined. Wouldn’t the compilers of his biography be acquainted with the suttas?

This is just speculative, but the later biographies seem to use
1.) The episode of four sights from the story of previous Buddha (Vipassi ?)

and
2.) Yasa’s account of going forth after getting disenchanted with sensuality
to fill the gaps in the story of Buddha’s renunciation.

Possibly, though I don’t see that there was really any gap that needed filling here. And so I’m more inclined to think that this part was inserted just to add spice to the story.

The sutta reference where the Buddha clearly says that during his going forth, his parents were present and crying got totally sidelined.

I can certainly imagine they were shocked when he declared his intent to go forth. But we don’t know the details or timeline of how this played out. Days, weeks or months could have passed between his announcement of intent of renunciation and the day he actually went forth. At the time of his departure there would be a culmination of high emotion running within his family. And I don’t see his ethical makeup as one who would would just kick his wife and child to the curb without making sure that their well-being was taken care of. We don’t know what preparations he made before he shaved his head and beard, donned his robes and set out.

We don’t know what preparations he made before he shaved his head and beard, donned his robes and set out.

This was what I actually meant when I said elements of Yasa’s story were taken to fill these gaps Ven @Dhammanando ! Along with the Great escape episode in the middle of the night.
Sorry if my framing of words couldn’t convey that; I have edited it.

Absolutely. Not only that, but there were sure to have been reciprocal relationships in place which would assure that Gotama’s family was taken care of. Especially since he was a warrior class male, who frequently left the tribe for military campaign. For a male to leave the community for extended periods of time was not an unusual thing, and would have happened often whether the Buddha had chosen to renounce or had become a warrior. The only difference is that he chose to join a wandering band of ascetics, instead of a wandering band of raiders or soldiers. Instead of returning with enemy booty and slaves, he returned home with the Dhamma. The comparison between warrior and ascetic was often made, and can be seen in the often militaristic language that is used to describe an ascetic’s striving.

This actually reminds me of the version of Buddha’s renunciation found in Dr. B. R. Ambedkar’s book ‘The Buddha and his Dhamma’.
Here, not wanting to be party to a war, the Bodhisatta takes pabbaja as a middle way between war and social boycott of his family (for not participating in war). Curiously though, although the book draws quite frequently from the Buddhacharita, this reason is nowhere to be found in it or in any of the surviving biographies.
You can read the book here

Of course! I didn’t think of that. There were no stay-at-home Dads in those days.

No, when people asked him who he was, a God, a human being, etc. He said he was awake (buddho), that’s all