Just curious about this really. When a monk has finished his training in the United States it seems that almost all of them stay very close to the Sangha. I understand that there are very serious and important reasons for this. Many of the rules in the Vinaya would become almost if not impossible to follow if one decided to become a wander ascetic in the West.

I am aware of one monk that has done this Venerable Pamutto. Here is a really interesting interview with Pamutto did with Sona.
My Life, My Practice: Ajahn Sona in conversation with Pamutto Bhikkhu

What are the thoughts within EBT practitioners circles on how a monk should best go about practicing as a wandering ascetic in the West.

Some things that come to mind would be like what a monk would be allowed to carry. Of course ones robes, bowl, and razor… What about things such as a tent (of some sort) or soap? Also what about the rules around excepting food?

I think the idea of monks doing this in the West sounds really beneficial.

I guess I’d just like to hear some thoughts on what others have seen and know of monks doing this practice in the West? How has/does it work in modern times compared to in the past? Has Theravada/EBT traditions set some sort of specific guidance/guidelines for wandering in western countries past the Vinaya in trying this kind of practice?

Has Theravada/EBT traditions set some sort of specific guidance/guidelines for wandering in western countries past the Vinaya in trying this kind of practice?

Well there is a sutta where the Buddha says you should stay in the village where you attain jhana until you attain liberation, so the priority would seem to be samma samadhi over wandering. And another sutta where he says monks should stay in a village until they attain samadhi and then they could move to the forests, otherwise if they’re alone in the forests without samadhi they will be too restless and scared.

So I think wandering in and of itself without reason isn’t really a thing, there are of course suttas where monks leave villages because they’ve shown a layman a supernormal power or spoken too much and must leave.

Yes. And / or tarp and mosquito net.

the rules around excepting food?

Of course you have to keep all those rules.

monks doing this in the West sounds really beneficial.

It can be for a while, but even Than Pamutto had to stop after a while. The Buddha said there is danger in wandering too long just as there’s danger in staying at one monastery too long.

monks doing this practice in the West?

If you’re into this topic, maybe check out News from True Cultivators about an extended, silent pilgrimage up the California Coast.

modern times compared to in the past?

The big challenge in modern times is that all the land has been claimed. In ancient times, monks wandered around and lived in the uninhabited, unclaimed wild areas… which no longer exist as such.

Wandering is kind of just an extended walk. It’s not that uncommon anong monks I know (i.e. the ones who keep a consistently high standard of vinaya).

One of the benefits is that it can help introduce you to non Buddhist locals. (This could also potentially be a negative, as it means many unpredictable interactions).

Sometimes wandering can unfortunately bring you closer to lay people, if staying in places like laypeople’s sheds etc (which don’t normally have proper toilets…meaning that coming into the house is still sometimes necessary in a modern setup).

The only tip I would have is to really think through the camping setup properly. If your tent game is off, you will end up wet with dew, cold and bitten by mosquitoes.

Also, it’s difficult to find a proper free campsite. If I had to do a foot journey again, it would likely be a mix of staying with dayakas and temples.

And yes you need soap and a place to do your clothes washing and sewing. As well as a place to receive your mail and charge your phone if you have one, and someone/a proper place to leave your identification papers with.

It’s the kind of thing I would only do if I had a good reason i.e. actually wanting to get from place a to place b. You receive a lot of gifts while travelling without necessarily giving much back to the communities you pass through, I would want to have a proper reason for being there.

I think it’s still important for Buddhist communities to recognise that their monks and nuns essentially are free to leave, so it’s good to actually leave once in a while to remind ourselves and others, and to disentangle from admin duties etc.

If you are in Western Australia keep an eye out for a wandering Samaneri on the 1,000km long Bibbulmun Track. She’s made it from the South end of the track to near Collie and found many supporters along the way. A few who have then come to visit us at Dhammasara.

Being a Samaneri, this is easier for vinaya/precepts. It would be near impossible for a solo bhikkhuni to do this, which is why she has chosen to do this walk now. It helps that the BSWA Sanghas have lay support right through South of the state along the length of the track with monasteries/viharas at each end.

The American monastic Heng Sure (a bhiksu in the Chinese tradition) did a 2 1/2 year pilgrimage in California, they would bow as they walked. There’s a lot of writing on what they encountered on the way and all the difficulties. 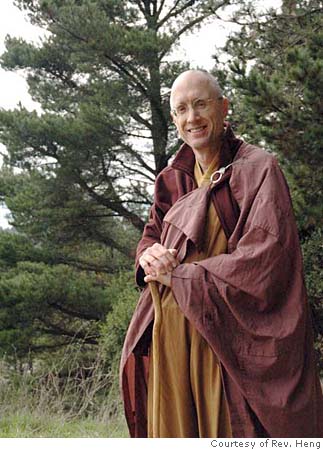 FINDING MY RELIGION / Buddhist pastor Heng Sure talks about his 2½-year...

Yes, including their letters from the journey to their teacher which I linked to above