What acts of goodness inspire you?

I thought it’d be nice to start a little thread about all the goodness in the world.

I’ll start. A while back I saw this video about an exceptional funeral director. He buries the poor, the homeless and criminals. He helped bury one of the Boston Marathon bombers. He dips into his own savings when someone can’t pay for a funeral. His walls are covered in pictures and letters from all the people he’s helped.

At the end of the video, he tells a story about a widow whose late husband had been dressed in a bright obnoxious tie. So he turned to the widow and said “Do you like my tie?”. She said yes. And so he put his own tie on the dead guy. And the widow calls him three times a year to thank him for that.

Wow!! Isn’t it amazing that there are such kind people in the world!? What acts of goodness inspire you?

This reminds me a passage of Ajahn @Brahmali’s booklet Why Samatha and Vipassanā are inseparable, where Ajahn recommends telling and listening to stories about acts of goodness. The book itself also has a few such stories.

The facts that many enlightened beings have left words for us, or are teaching us, are most inspiring.
I would think it is a great deal of burden to teach with no gain from their side.
They could just easily dismiss us as we would a colossal ball of fire ants.

The facts that many enlightened beings have left words for us, or are teaching us, are most inspiring.

You know, the track record shows that there is no other drive or options for those that are truly Enlightened. It is the intrinsic Metta shared by all of those who have achieved true Buddhahood. To share the Dharma and bring others joy by helping them become Awakened is the faultless drive and purpose of a Buddha. When we are always ready to do such things, maybe we ourselves will become Enlightened.

I personally love the “good doers” who stay in the background. They do good and are not known for it. This is the real spirit.

Many people do good out there but are acknowledged “every five minutes” in the paper, through awards etc.

When I explain people (on request) the point of Dhana they are baffled and intrigued.

Don’t get me wrong, every act of goodness is great but the person who puts grocery packets together and lays them in front of a door for a needing soul, inspires me more than somebody who is constantly in the local paper.

@turntables : This is a wonderful guy with true spirits!

I want to say I am greatly inspired by the world-changing and Bodhisattva attitude and life of Martin Luther King Jr. A paradigm of changing the world is definitely in His hands. And I still turn to the guidance and wisdom of Thich Nhat Hanh. These two dear Spiritual Friends for this world have made our Way easier, and their Compassion will never be extinguished. 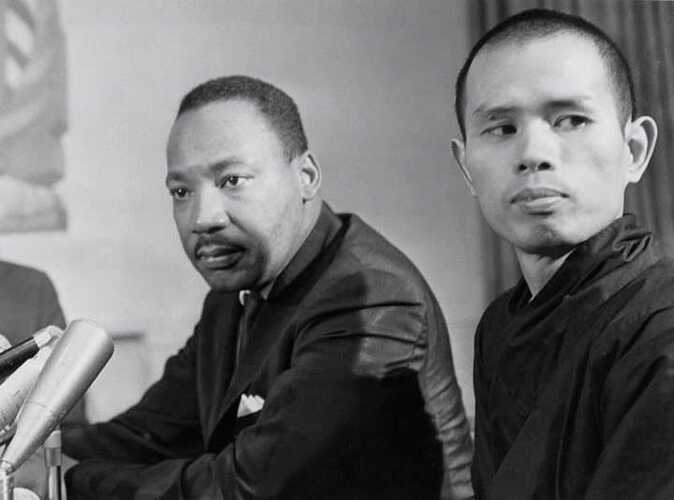 My wife worked with the mentally ill, which are able to live outside a clinic, but need supervision anyway. They often live together in small communities of 4 or 5 people. She has been an advisor on some middle level, responsible for, say, 20 to 40 of such people and some 4 to 6 coworkers.

Every year when it was christmas she organized a meeting/party for that people, and brought some nice story to read aloud and motivated the people to sing together some appropriate songs for christmas.
Collegues of her seem to have frowned secretly, although formally the institution where this happend was a division of the german “Diakonie”, a big organization with roots in the christian church, and one would expect, that -especially at christmas- the institution would support religious contemplation.

When she told me this, and also told me about how that poor people she had to care for were happy and moved and liked this yearly event very much, and listened to the stories, and sang together, and got calm and peaceful, I always was reassured, that I’m lucky to be with that wife with such a true good compassionate heart (more of such “good heart” events happened in several hindsights and over the long course of our relation this observation helped me much, for instance, to find a way out of conflicts when we had some). Interestingly, when she retired, next year there was no other one to continue this christmas events and I felt very sorry for the poor clients.

To put a good heartily impulse into the world, and to provide reliable relation as possible, is something I like also in the reports of the Buddha’s life, of his behaviour & verbal teaching. And having someone at my side who practices this continuously helps also to keep my own attention up: for the gift, that compassion (be it as metta or mudita) with my social and otherwise environment can hand over to the world. (And it even helps to emancipate oneself from the hazzle between “the lines” or “schools” or “yanas” and their controversial interpretation of the transmission and their different grade of faith in the authenticity of the traditions

Obviously, there’s the classic historical figures. But most surprisingly I’ve been very inspired by one of the biggest Gen Z social media stars: Jimmy “Mr. Beast” Donaldson. He’s an agnostic atheist from North Carolina, a South Eastern state in the US. Since he was 13, he’s been single mindedly obsessed with succeeding as a YouTuber, with interviews on podcasts showing that he’s always taken an extremely mundanely skillful approach, seeking feedback, learning from mistakes, etc. But what’s really inspiring is what he’s consistently chosen to do with his success: give back. The first time he got a sponsorship, when he was still just a teen, he gave 100% of it to a homeless person. $10,000, more money than he ever had before, and he gave it all away. He now makes millions a year, lives a modest lifestyle, runs an ambitious food pantry program, and pours most of his money into the YouTube business with his main genre being videos where he gives away extravagantly - including a sort of tournament where the winner, a black man who’s family was not doing too well, got a million dollars and was able to radically turn things around. As well, he organized a fundraising drive for the Arbor Day Foundation, Team Trees, which raised over 20M$ to plant over twenty million trees.

I think, particularly in the west with the biblical admonition against public piety and charity, we can have a knee jerk reaction against those who become famous through giving. But I think he’s like a (lesser) Anathapindika or Visakha, an inspiring paragon of giving. And he sees himself this way as well, in three ways. First, he often directly prompts others to give, such as telling other successful YouTubers they should give money to people. Second, his success causes others to copy him in pursuit of similar success - one of his imitators paid hundreds of thousands of dollars in medical bills for example. Third, it just generally promotes positivity in the culture.

I think it’s very easy to look back at prior generations, see their greatest members, and say, “What’s wrong with kids these days. MLK never would have done a Tide Pod challenge video.” But people like Mr. Beast make me very excited for Gen Z. Imagine a world where the most popular celebrity among teenagers got that way through generosity.