What is an elephant rug? A poll!

In sutta translations, we sometimes find the term “elephant rug”. For example, in the Raṭṭhapāla Sutta (MN 82), King Koravya invites Raṭṭhapāla to sit on an elephant rug.

Now, I know what an elephant rug is. But I wonder whether it is clear from the translation, so I am making this poll to find out. When we have enough votes, I will reveal the exciting answer. But please, no spoilers until then!

Elephants lack nice feeling fur or pleasant hides. Who on earth would want to make a rug out of one?

You’d think, but it is apparently a thing. It’s common these days for monks in, I think, Myanmar, to carry a piece of leather that they roll out to use as a seat. But I doubt if they use elephant hide.

But if you want, you can buy a handbag:

Not that I recommend it! Here’s a video, including pieces of leather that could be used for sitting.

If you are King you are rich and powerful enough to have a rug made of elephant leather made for you!!

Indeed. I mean, we think of it as something unethical, but they had hundreds, if not thousands, of elephants in the royal service, and, well, they may be long lived but they have to die some time. I imagine the hide may have been very useful.

Not to be a nuisance, but the call of the question was whether the translation lead us to the correct answer. My take, after reading the Sutta, was that Raṭṭhapāla chose his own mat, over the elephant rug that was offered to him. So, in my own mind, he was offered a mat-sized seat, and I felt that this mat sized seat would be most likely akin to a horse blanket thrown over a horse before the saddle is put on. Maybe I am overthinking this one, but my read of the Sutta had me picturing a grass or fabric rug or blanket of the size of a sitting mat or cloth, as is used in Thailand. Other translations I looked at ( Ñāṇamoli Thera,Thanissaro, Bodhi) use “elephant rug.” One ( Lupton?) used: “Let the Venerable Raṭṭhapāla sit himself here on a couch of flowers.”

Would it help to say " a mat made of elephant hide?"

Oh no… ! I clicked the wrong one! I wanted to click the other one actually…

First question: Probably, after all, I did click the right one. I wanted to click the first option, and after clicking it showed the results, and my option suddenly was in the second position, so I thought I had clicked the wrong one. But when I click “hide results” they swap positions again, and the dot is where I wanted to put it.

Second question: Am I a Russian spy? Not to my knowledge at least…

Perhaps a third option could be “A toupee stolen from a follically-challenged pachyderm”? 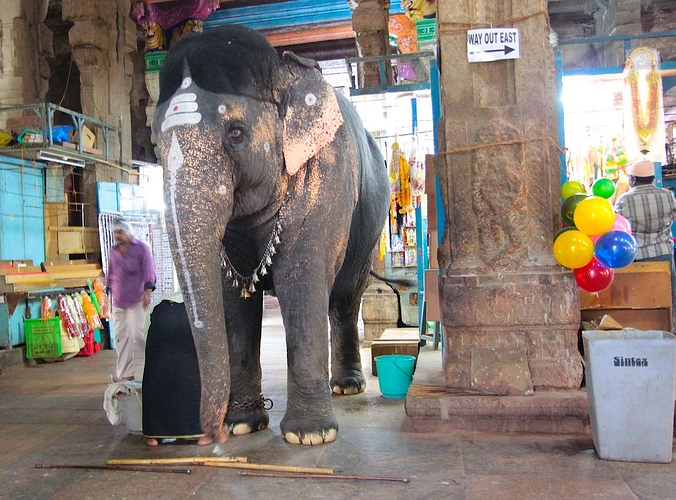 Yes, they do that, I think it is to avoid bias. Anyway, the crucial thing is, your vote is there!

Second question: Am I a Russian spy? Not to my knowledge at least…

That’s a relief. It would be wrong to say that we have evidence that the Russians have interfered with the voting process here at SuttaCentral. But the FBI has not ruled it out. Makes you think!

Perhaps a third option could be “A toupee stolen from a follically-challenged pachyderm”?

Well, that possibility did not occur to me.

i don’t think it’s immediately clear from the translation, one needs to consider the context

[details=Summary]offering an item outside of specific setting and purposes it’s usually utilized in and for, would seem improbable
likewise improbable is taking a rug from an elephants back and bringing it all the way from the road to the destination just to have a person sit on it

UPD: turned out to be off the mark[/details]

Okay, so I have closed the poll after 15 votes. Thanks, everyone!

In AN 3.63, we have the mention, along with many other similar items:

And since it is, I assume, impossible to make a rug out of a chariot, it seems that it must mean rugs used for riding on these things. This makes sense in the Raṭṭhapāla Sutta, for King Koravya has arrived riding on elephants, so it would be natural for him, seeing the monk sitting on a simple mat of grass, to offer a better rug.

But the poll did confirm my suspicion, which was that the term “elephant rug” is not entirely clear. I didn’t really get what it referred to either, until I looked into it. So now I know I’m not alone.

In the above passage we could translate:

rugs for elephants, horses, or chariots

[quote=“sujato, post:3, topic:4678”]
You’d think, but it is apparently a thing.
[/quote]It actually makes sense if the elephant hide is rendered into leather-like material.

A leather rug is still bizarre to me, but maybe it is less-so bizarre in a culture where it is not common at all to wear houseshoes, as the leather would be less damaged.

When I initially responded, I was imagining a de-skinned elephant laid out on the ground like those hideous bear rugs, one of whom, as I recall, the Addams Family used to own…

Imagine an elephant stretched out like that, head, tusks, and all, and you will see why I thought an elephant rug was a bizarre idea (not that that I would argue that bear rugs aren’t bizarre)

I wonder whether it is clear from the translation, so I am making this poll to find out.

There was no ‘Don’t know’ option, not knowing I would have said “don’t know”.

But the poll did confirm my suspicion, which was that the term “elephant rug” is not entirely clear.

The truth will prevail!

A leather rug is still bizarre to me, but maybe it is less-so bizarre in a culture where it is not common at all to wear houseshoes, as the leather would be less damaged.

Burmese forest monks value leather sitting mats (versus the standard issue cloth ones) for their durability, resistance to mold in tropical jungles prone to rain, high humidity and mold.

Ah, something similar happens in Catholic circles as well

It took a split second for him to realize what happened.

Burmese forest monks value leather sitting mats (versus the standard issue cloth ones) for their durability, resistance to mold in tropical jungles prone to rain, high humidity and mold.

Actually I’m not sure about mold resistance but I forgot to mention the important part. If the ground you’re meditating on is wet and muddy, it’s going to soak up right through a cloth sitting mat. Not the leather one.