What is the difference between neutral feeling and equanimity?

What is the difference between neutral feeling and equanimity?
Please give an example.

IMO:
upekkha is not a feeling but a perception ( sañña)… (this passage seems to call it upekkhāvedaniyā? i don’t think that’s common…)

the mind tainted with ignorance feels a “neutral” feeling and reacts with boredom, distraction, basically delusion (and habitual greed/lust in the case of positive feeling, and aversion in the case of negative)

upekkha is neutral-ish, yes, but really it is something much more in the suttas; it is a result of wisdom. upekkha apparently comes from ikh root with upa- prefix, meaning something like over-seeing. to me, there is an element of distance embedded in the idea, one is seeing from afar, the bird’s eye view, if you will. this is in-line with the disassociation/de-identification inherent in the wisdom of the suttas. upekkhā is going beyond desire and aversion in regard to the world, and beyond even the positive feelings of meditative experience. really it is quite exalted in the EBT’s: take for instance it’s place at the pinnacle of the brahmavihāras, the pinnacle of the 4 jhānas, the pinnacle of the 7 awakening factors.

jmo. maybe you can come up with examples?

Venerable Anālayo, in Compassion and Emptiness, give a lovely simile regarding the 4BVs. I will give the first 3 in brief.

“The fourth of the divine abodes, equanimity, is then like the full moon on a cloudless night. Just as the sun and moon are both up in the vast sky, in the same way the four brahmavihāras share with each other the boundless nature of a mind that has become vast like the sky. The moon is not itself a source of sunlight, unlike the sun. So, too, equanimity is not actively involved with others in the way the other three brahmavihāras are. At the same time, however, the moon does reflect the light of the sun, just as equanimity reflects within itself the positive disposition of the other divine abodes.”

I found Venerable Anālayo’s description very useful to describe the nature of Upekkhā which is why I’m sharing.

it is a result of wisdom .

There are two kind of Upekkha.
With wisdom and with ignorance.

Venerable Anālayo, in Compassion and Emptiness, give a lovely simile regarding the 4BVs.

Thank you Pasaana but that simile is not very clear.
It does not represent what four Brhama Vihara about.
In my opinion:
Metta : This is a kind of compasion you extend to your enemy or some thing you don’t like
Karuna: This is a kind of a compassion towards a sick person or a person who you like
Mudita: This is a kind of joy with outhers success
Upekkha:?? Perhaps the balance attitude in your mind towards above three.

Upekkha.
With wisdom and with ignorance.

Does an ignorant upekkha occur in the suttas? Or is this something from the commentaries…?

I think those are beautiful similes. They do make upekkhā seem as if it stands apart, in a sense. And that’s the sense I get from it’s occurence in other contexts, it is singled out at the end of important doctrinal lists.

Venerable(/Ayya?), do you have an opinion on whether upekkhā in the BV context is any different from it’s occurence in other contexts?

Does an ignorant upekkha occur in the suttas?

what exactly is equanimity?

Is there an answer to my question in that thread somewhere? If so, could you copy and paste it here, please.

Does an ignorant upekkha occur in the suttas?

Living in the world of appearances:

“And what are the six kinds of household equanimity? The equanimity that arises when a foolish, deluded person — a run-of-the-mill, untaught person who has not conquered his limitations or the results of action [2] & who is blind to danger [3] — sees a form with the eye. Such equanimity does not go beyond the form, which is why it is called household equanimity.”—MN 137

" “And what are the six kinds of renunciation equanimity? The equanimity that arises when — experiencing the inconstancy of those very forms, their change, fading, & cessation — one sees with right discernment as it actually is that all forms, past or present, are inconstant, stressful, subject to change: This equanimity goes beyond form, which is why it is called renunciation equanimity. (Similarly with sounds, smells, tastes, tactile sensations, & ideas.)”

Thank you, @paul1. I stand corrected.

There are two kind of Upekkha.
With wisdom and with ignorance.

Metta is like the sun in the midday sky because it is all encompassing in its acceptance without attraction or craving. Metta would not allow us to resent a loved one or an enemy for taking the last of the ice cream.

Karuna is like the promise of the setting sun that precedes the sunrise. It frees us from the futility of fighting the night and allows us to work towards the coming day.

‘I’ve developed the heart’s release by compassion. I’ve cultivated it, made it my vehicle and my basis, kept it up, consolidated it, and properly implemented it.
Yet somehow the thought of harming still occupies my mind.’
They should be told, ‘Not so, venerable! …

What is the difference between neutral feeling and equanimity?

Neutral feelings occur when there’s no pleasant or unpleasant feelings present. Equanimity is when aversion or delight/cravings were expected but due to the presence of wisdom there’s no such reaction. Peace prevails, instead. If something bad happens but we’re are able to stay without reacting, but responding well to the situation, that is equanimity.

Sankharaupekkha is when all aggregates regarded equanamously, when they are seen with insight according to commentaries.

I’d like to explore more what a layman’s or ignorant equanimity is exactly? Is it just plain indifference…

“plain indifference” is an excuse for prejudice:

Interestingly. I found this only in DN33.

The layman’s equanimity is a ‘feeling’ in this EBT’s context.

So you are saying upekkha is synonymous with “neutral” feeling? If that were so then logically positive feeling would be the same as dosa and negative feeling the same as lobha, no?

“plain indifference” is an excuse for prejudice:

I’m not sure how you mean prejudice and indifference is connected? The quote from DN33 just lists 4 kinds of prejudice, no connection to indifference (or “equanimity”)…

how you mean prejudice and indifference is connected

The inference is a personal observation that:

Indifference is divisive. Equanimity is inclusive.

It would seem that this EBT is talking about the mental reaction to a sound, sight, etc. 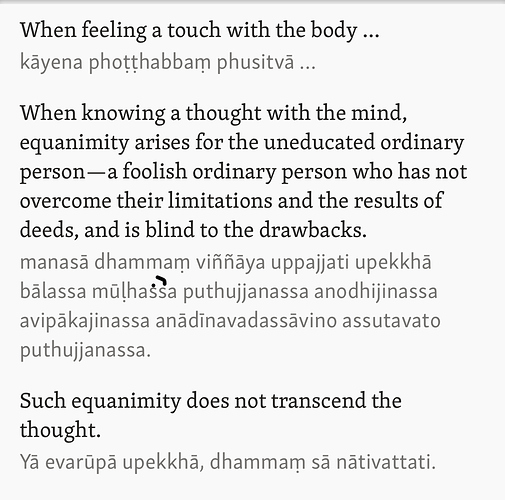 A pleasant sight may give rise to somanassa or happiness. The happiness is a mental fabrication. Similarly some sights give rise to equanimity.

The emotion of equanimity might have arisen from a neutral feeling which is inherently part of the stimuli.

We have to be aware of near enmy and far enemy of Upikkha.