Why Burmese and Thai monks don't keep the bowl in lap like Sri Lankan monks? (while having meal)

I heard they interpret the Vinaya rule differently, but how could this happen if modern Sri Lankan Lineages descend from Burmese and Thai?

What was the original method?

There’s a minor Vinaya rule against it:

“You should not put your bowl in your lap.
“Na, bhikkhave, aṅke patto nikkhipitabbo.
If you do, you commit an offense of wrong conduct.”
Yo nikkhipeyya, āpatti dukkaṭassā”ti.

I had been led to believe that if one is holding the bowl (as one would do while eating) this does not fall under “keeping the bowl in the lap”. Although I don’t put any absolute authority on the origin story, it’s hard to imagine how one would drop the bowl while holding it.

but how could this happen if modern Sri Lankan Lineages descend from Burmese and Thai?

This connection is not as strong as you may imagine it to be. As far as I known they are only lineages in the sense of who the preceptors were. I don’t think there is evidence of any kind of living tradition passed on from one to the other.

I had been led to believe that if one is holding the bowl (as one would do while eating) this does not fall under “keeping the bowl in the lap”.

Ajahn Thanissaro’s Buddhist Monastic Code describes some of the differences of opinion between communities:

To prevent damage to the bowl, one should not leave it aside at the edge of a ledge (and, by extension, a table), at the edge of a small ledge outside a wall, on a bed, a bench, an umbrella, or on one’s lap. (“Now at that time, bhikkhus left their bowls on their laps; in a lapse of mindfulness, they got up. The bowls broke.”) The bowl should also not be hung up (e.g., from a strap over a hook or from a peg in the wall). The Commentary notes that if a ledge is wide enough so that the bowl, if tipped over, would remain on the ledge, one is permitted to place it there. The same allowance would apply to placing a bowl on a table as well. The Commentary also states that one may leave the bowl on one’s lap if the bowl is hanging from one’s shoulder by a strap.

The last opinion in the list is the normative one in the stricter forest wats of Thailand.

Mysteriously, the concept of “leaving the bowl in the lap” doesn’t appear at all outside the Pali in Chinese or Sanskrit, despite the fact the Chinese Dharmaguptaka vinaya contains a section which mirrors the Pali in some regards. It’s hard to get a good grasp of what is meant, as indicated already in the BMC.

The bowl stand used in Thailand is almost a piece of furniture it’s so large, whereas the stands used in Sri Lanka are quite small, just enough to keep the bowl from rolling around. I don’t know which came first (the method of eating or the type of bowl stand) but it would be much more difficult (and possibly messy) to eat from a bowl on a very small stand. Whereas with the large Thai style stand, you can hoist it close to you so it’s almost like it’s in your lap while seated cross legged.

As he is sitting cross-legged and has a hand around the bowl, Upagupta’s deportment would be in compliance with two of the opinions reported by Ajahn Thanissaro, but would have earned him a reprimand from Ajahn Maha Boowa.

If there’s any truth to that tale about Upagupta clumsily spilling the old bhikṣuṇī’s bowl of oil, then he of all people would have done well to be extra-careful about the bowl rules. 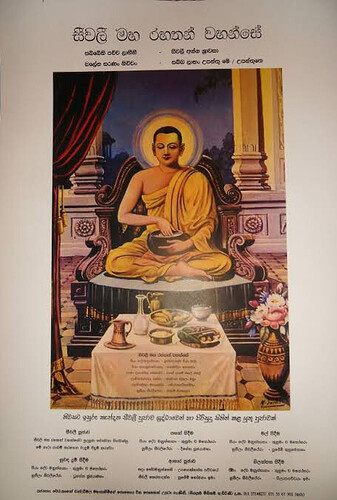 In the same vein…Sivali Maha Rahatan Vahanse, Sri Lankan style. I haven’t seen sitting Phra Sivali in Thailand or diaspora (only standing) but google tells me this representation is also possible for Thai Buddhism.

There’s a minor Vinaya rule against it:

Yes bhante, but I have heard the Sri Lankan monks say that the minor rule is about keeping the bowl in the lap without holding it.

This connection is not as strong as you may imagine it to be. As far as I known they are only lineages in the sense of who the preceptors were. I don’t think there is evidence of any kind of living tradition passed on from one to the other.

Yes bhante, it is true. Thank you for the observation.

It is said that the Sri Lankan lineage completely died out in the 17/18th century leaving only few (valid or invalid) samaneras. Some says they and people in that century still knew their predecessors rites.

If it is true, then, would it suggest that the current Sri Lankan way has the more chance to be the original rite?

If we believe Sri Lankans didn’t know even their ancient monks’ rites at 17/18th centuries, then it could suggest that the Burmese and Thai way have more chance.

Others include the cross-legged lap under the word lap here,

Thank you bhante for the quote.

It is true that not keeping bowl in the lap while having meal, is more safe regarding the Vinaya rule.

The arguments I have heard against it (from monks from Sri Lankan tradition) are as follows.

What do you think, bhante?

Does it show that at the time of depiction Burmese and Thai knew the ancient rite as “Lap”?
Could you please mention the era of the depiction?

it would be much more difficult (and possibly messy) to eat from a bowl on a very small stand.

Yes, if using a stand while eating was the original way, then it seems the Sri lankan stand is very small and demands bending while eating.

If “Lap” is the original way, then Sri Lankan small stand is enough to leave (store) the bowl aside after the meal.

What do you think, bhante?

I think that practising in line with any of the views on correct observance reported in this thread will probably suffice to ensure that clay bowls won’t get broken and metal bowls won’t get dented. That being so, I think monks oughtn’t to get into arguments about this, for life is short and the issue is a trifling one.

Having said that, I don’t find the arguments you report particularly convincing.

“Is it not comfortable to eat in that way.”

I’ve never met with any discomfort when doing so.

But I find these things easy to imagine and many suttas describe householders doing exactly this.

“There are no clues about such a way of eating, in the texts” (eg: lay people preparing stands or separate mat on the floor … etc)

Yes, I think it’s true that there’s no mention about them laying down bowl stands. But then there’s no mention of bowl stands in any connection, except for the Vinaya passages that make them allowable and stipulate what they should be like. It may be that the monks took their bowl stands with them when they went to eat at the homes of the laity (just as we do in Thailand), or it may be that the laity provided them with stands when they arrived, but that this fact wasn’t considered important enough to merit reporting.

But then there’s no mention of bowl stands in any connection, except for the Vinaya passages that make them allowable and stipulate what they should be like.

Outside of the root texts, a bowlstand gets a dishonourable mention in the Sutta Nipata commentary as the cause of a monastic romance.

From the Dhammapada Atthakatha

But on the first day she provided those Private Buddhas with seats in the royal palace, took their bowls, filled them with rice-porridge, and presented them to them. The Private Buddhas took the bowls of porridge, but they were so hot that they were obliged to shift them from one hand to the other. That woman, seeing what they were doing, presented to them eight ivory bracelets of her own, saying, “Use these bracelets as stands for your bowls.” When they had so done, they looked at her, whereupon she said, “Reverend Sirs, we have no use for these bracelets. Accept them as a present from us before you go.” The Private Buddhas took them with them to Nandamūla mountain-cave, and those bracelets are preserved there unimpaired to this day. As the result of this act of hers, she now knows the Tipiṭaka by heart and possesses profound wisdom. Likewise it was through waiting upon the Private Buddhas that she obtained the Fruit of Conversion. These were her deeds in the interval between two Buddhas.