Why homeless people and begars can't live like a monk?

Why homeless people and begars can’t live like a monk?

They need money, not food and water… In my country, begars is a job for many people.

Before, I had fallen on evil times:
no husband, no children,
no relatives, friends,
no way to obtain clothing & food.
So, taking a staff & bowl in hand,
begging for alms from house to house,
feverish from the cold & heat,
I wandered for seven full years.
Then seeing a nun
obtaining food & drink,
I approached her & said:
“Let me go forth into homelessness.”

She, Patacara, from sympathy,
let me go forth;
then, exhorting me,
urged me on to the highest goal.
Hearing her words,
I did her bidding.
Her exhortation was not in vain.
I’m a three-knowledge woman,
fermentation-free.

Homeless people longs for a house. Beggars longs for money. A monk longs for neither.

Thank you Ayya.
I never expected this answer!

I think I read somewhere that the literal translation of bhikkhu is beggar.

I think I read somewhere that the literal translation of bhikkhu is beggar.

I think the real meaning of Bhikkhu has lost in places like Sri Lanka.
I have never seen my village monk going on Pindapata.
He stays in the temple and sends a toy drum from house to house to remind people about Dana.
People have to take the food to the temple.
I think the idea of Pindapatha is to contact with people.
The bhikkhu should go Pindapata with compassion for the benefit of people.
This also helps the Bhikkhu as s/he gets a lot of exercise and exposure to the sunlight.

Once a month we do pindapat through the centre of Adelaide. Our Cambodian Bhikkhu friends were so excited when we invited them as they hadn’t done it in Australia. The senior SL Bhante was worried we would be arrested the first time and didn’t come. He sent his junior who’s temple in Columbo had started doing pindapat at his suggestion. Here’s a photo from one of our first ones. We are very well supported by many nationalities. 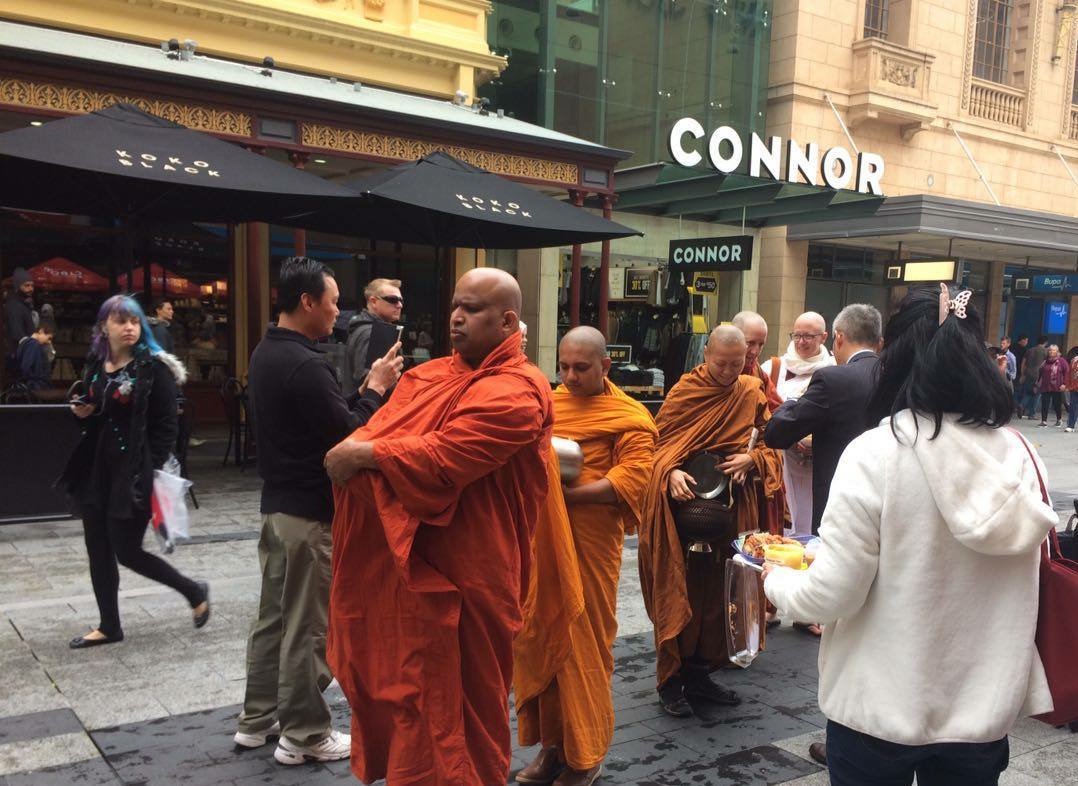 I have never seen my village monk going on Pindapata.

Maybe you could show him the photo of them doing it in Australia.

There are more images on the ‘Buddhist Society of South Australia’ Facebook page. I have limited data until Monday but if you don’t do Facebook I will upload the images then

We are very well supported by many nationalities.

Do you know, is this Buddhists of many nationalities who already “get the deal”, or are there m/any that come up out of curiosity and offer support after engagement/explanation, or…?

On of the things I really enjoyed about An. Sabbamitta’s account of her and her fellow’s walk through a bit of Europe last year was how willing and glad many people who didn’t previously know anything much about Buddhism appeared to be to offer support.

Why homeless people and begars can’t live like a monk?

Why doesn’t Bill Gates enter into renunciation? He’s already in a perfect place for it. His family & loved ones would be very comfortable with the money he would leave behind.

He probably doesn’t ordain because he doesn’t want to.

Homeless people probably don’t ordain because they don’t want to, anymore than they “wanted” to be homeless.

Do you know, is this Buddhists of many nationalities who already “get the deal”, or are there m/any that come up out of curiosity and offer support after engagement/explanation, or…?

Mostly people who are existing Buddhist but we have started to get general interest. Just after the above photo a stranger walked over and asked what was happening and our friend let him offer some of his food.
The same friend works in a bank and his colleagues came down and offered
Food the last time we went.
Nothing quite as good as the tilorien adventure

Who is in a better position to become a monk?
Bil Gates or a homless& a begar.

Bil Gates or a homless& a begar.

How on earth would anyone know? What makes a homeless person wiser than a rich person? The homeless person didn’t “decide” to be homeless. Nor did the rich man necessarily make his own fortune.

How on earth would anyone know?

But who decides what happened on account of what karma and if that is “bad” or “good” for a person? Maybe someone looses their job and is homeless for a while, and the heating unit in their own house explodes. They would have likely died a fiery death if they stayed in that house. Perhaps they get on their feet later and have a job again.

Some people, in my experience, use Buddhist discourses concerning karma as an excuse to feel good about themselves. “Look at that X over there. They live wretched lives. They are bound & born into vice. Look at us. We have more prosperity. Clearly we are the people of higher capacity who have nourished good actions in the past to get us here. Don’t give money to them, they probably did Y terrible thing in past lives, they are demonstrably bad people as demonstrated by their wretchedness in this life.”

“That X” in the above could be essentially any group of lower socioeconomic status.