Why Materialism is False

This says it all:

Yeah. I remember at my university the physics majors that were getting all of the chicks…not. 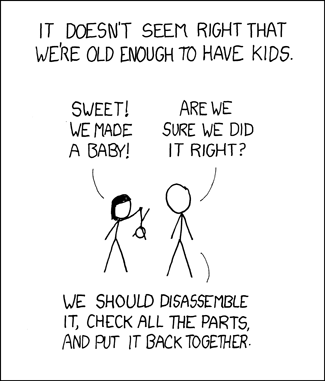 I bet my future kids will read this someday. DEAR FUTURE KIDS: how did you get internet in the cellar?

I don’t know… those big brains exploring the unknown… unbounded, by comparison to the majority.

There are “big brains” out there in all fields. The unique feature of the field of physics is that it has a large border with metaphysics (I think the border is there in other fields as well, just not as big or obvious). The problem is that the border is fuzzy, and physicists occasionally wander across it, thinking their expertise transfers.

I suspect it’s an intellectual leap to extend entanglement of particles to humans. AIUI, observation of a particle (collapses the wave function to a particular state?) and instantaneously sets the entangled particle to the opposite state. If this did scale up, would this mean that an identical twin would feel a pleasant feeling when their entangled “twin-region” feels unpleasant?

Whew. I, too, appreciated Karl’s awesome reply, but had no idea what was being discussed. Quantum entanglement?

Note on tongue in cheek physics pun: And, being as thick as a brick with all matters math and physics at university didn’t get me any “chicks,” either, to be honest.

thick as a brick with all matters math and physics

At Berkeley, I once went to a lecture by Richard Feynman. It was a deep marvelous lecture and he explained everything with resounding, inexorable clarity. Afterwards, as I stood awaiting his autograph, I suddenly realized that I could not repeat a single word he had said. So I became a programmer.

Someone posted on Facebook a new video on “reincarnation.” https://youtu.be/oRhYQGbGE_o Naturally, people viewing the video post comments, are here are a selected few:

My grandmother asked me a few days before she died, if I would be her mother in her next life because I will be a wonderful mother. I smiled and said of corse I will be your mom.

I gave birth to my daughter that year and hadn’t thought about that conversation until my daughter was 3 and she was sitting next to me while I was looking at a magazine and there was a picture of a potbelly stove. She pointed at it and said, “That’s what mine used to look like.” and she jumped up and ran to the kitchen and pointed at the stove.

She then started playing with her play doe and she flattened it out and moved it back and forth in her hands and said, “This is how I used to do it.” I recalled watching my grandmother making pies when I was little and that is the way she would work the pie crusts before putting them in the pie pan.

I looked at her and she gave me a smile the way my grandmother used to smile. I got a tear in my eye and said, “It’s going to be alright, I’m going to be a good mom to you.” She crawled into my lap and put her hands on my face and she said, “I know you will.” That was that

when my son first started talking, he spoke in German! we live in Michigan in the US and have no German friends or relatives. we would say no and he would say nein and many other German responses like yes, food, play…all German words. A month later he stopped talking for awhile and Dr Found NOTHING wrong with him and no reason to not Talking​. I truly believe he was a German fighter pilot, as he was obsessed with planes from birth on. I think he had a hard time talking cuz he only knew German and we spoke English. He is 3.5 now and just starting to talk English…I can’t ask him about any past memories cuz he is still learning to talk and it gets to confusing for him. once when he was 5months I befriend a German lady and asked her to come talk to him. I don’t know what she was saying to him that day but he was beyond happy and at 5months he was trying to talk back to her. It was awesome! I truly believe he was reincarnated and to think that he may have gotten to choose me as his Mama makes me beyond happy

Update: The whole opposite state thing … wrong! I shouldn’t be allowed near the Internet.

It makes my brain hurt too! Though it seems that our everyday world works according to Newtonian mechanics rather than quantum mechanics - I mean we don’t directly experience the quantum world ( unless you are a New Ager of course

I would point out that even Newtonian mechanics often defies our common sense understanding (which is presumably why the Greeks didn’t have it figured out…). Our experience is that things stop if we stop pushing them, whereas Newton’s first law of motion states that objects do not change their velicity unless there is a force acting on them. [Of course the “missing” force is friction or air resistance…]. Even now, when I demonstrate motion using an air track, where friction is almost completely eliminated, the fact that the gliders just keep moving just feels wrong!