Would you follow your karma as believing it will lead to Nirvana?

Or you ignore it totally and don’t see it might be leading to lessons that is needed?

Just ignore it. It will fade away on its own in time. All you need to learn is right here, in this “fathom-long” body. Best not to let your attention wander too far afield

I don’t know if by just close your eyes , shutting our mind and emotions is a healthy way to deal with it outside of a temporary meditation sitting. Afterall we cannot be forever meditating. The momentum of karma will be pulling at us still unless we really able to get the breakthrough to see the pull for what it is. It could just be mishandling it by putting things we have not fully processed at the subs conscious level by pushing them under the rug. We will probably need to be honest with ourselves and process it for what it is, with our eyes wide open. Although, there is a chance that if we continuously denying our impulses or pull of inclinations, it would either fade in its power to influence or it would grow it in its strength but using our will power crushing it, we finally see it for what it is and it will just disappear as per anicca nature.

In any case, in the bigger picture of things across lifetimes, we learn in whichever path we take and grow and if we seek out wisdom and inclined towards letting go, we will eventually get to liberation, even if it might take some knots here and there to get there.

we cannot be forever meditating.

in the bigger picture of things, we learn in whichever path we take

To quote John Maynard Keynes, “In the long run, we’re all dead.”

For lay person even a monk, we are not in a position to have presence of mind all the times and having the strength of will power all the time.

In the long run, we reincarnate

Yes, however the Buddha didn’t say that all beings eventually get enlightened.

When pressed on that question, he simply said that all beings who do get enlightened do so via the Noble Eightfold Path.

This idea that rebirth means constantly learning and growing and “evolving” is a Victorian interpretation of reincarnation promulgated most famously by Madam Blavatsky as an attempt to make rebirth seem more “scientific” and more charitable to the Western believer in “progress”.

In Early Buddhism, in contrast, time is seen as cyclical, and we’re as likely to forget our old lessons as we are to learn new ones when the years and lifetimes go by.

Thanks for the ideology clarification.

Yes it is not to say all beings are inclined towards enlightenment. However, the momentum carries us forward towards whichever way we are inclined. For those of us here on this forum seeking for wisdom and seeking liberation and asking questions for doubts to clarify, we are likely to be headed there perhaps not in this lifetime but another in the future because we are already having the desire for enlightenment and we are not murderers or any such compulsive addicts.

Would you follow your karma as believing it will lead to Nirvana?

I’m not sure that I completely understand what you’re getting at. There’s clearly nothing we can do about our past actions, so it’s best to let those go. But as for the actions that we do right now, the Buddha suggests there are 4 types - dark, bright, mixed and neither-dark-nor-bright. That last ones is the the same as the Noble Eightfold Path. So that’s the actions that the Buddha recommends.

It could just be mishandling it by putting things we have not fully processed at the subs conscious level by pushing them under the rug.

I think the idea is not to push them under the rug, but instead to let them go. You don’t need to process anything if you let it go. Essentially it comes down to forgiveness.

For example. A action happened without your conscious control. And it is obviously having it’s effect on you.

But that effect. I believe can be used for Dharma sake just because karma or not made it start. I say karma or not because maybe it wasn’t karma. But still it’s a kinda karma because it’s cause and effect

Even Buddha Dharma has become so strong karma that I just keep becoming inclined back to it.

I think the Buddha teaches there are two bonds: the bond of merit and the bond of demerit. He also taught merit is a bond:

“He who, casting off human bonds and transcending heavenly ties, is wholly delivered of all bondages—him do I call a holy man” (Dhp 417)

-"There is no fear for an awakened one, whose mind is not sodden (by lust) nor afflicted (by hate), and who has gone beyond both merit and demerit. (Dhp 39)

The bond of merit is the bond with the human realm and deva and Brahma realms. The bond of demerit is the bond with the lower realms. One is bright kamma, one is black kamma. So, kamma can never lead to Nibbana, but is leads to relatively well-being but never to the end of suffering. Even merit is a bond and one has to go beyond even merit (see Dhp 39)

But, Buddha also teaches that one does not have to be afraid of merit (as a bond), because one needs merit to find the supra mundane path and start seeing that whatever kind of ambition, strive, craving ons has, one has to be give it up, totally, eventually. If one keeps striving for happiness in this life, keeps striving for well-being in this or other lives, for health, for succes, keeps striving for deva rebirth etc. that striving does not match with striving for Nibbana.

Yup. Bhante, the last one explain exactly what happened. I went outside.

but it seems it needed to happen.

For example. A action happened without your conscious control. And it is obviously having it’s effect on you.

But that effect. I believe can be used for Dharma sake

Yes. That’s true. Whatever comes up in our (individual) world(s) can be used for the sake of dharma. What else can we use? It’s how we approach it that makes it dharma or not? If we approach whatever is in our world with peace, love, kindness, gentleness, compassion and letting go then we’ve approached it with dhamma?

I say karma or not because maybe it wasn’t karma.

Yes. Not everything that happens to us is karma I think. This book has some good sutta based points on karma. 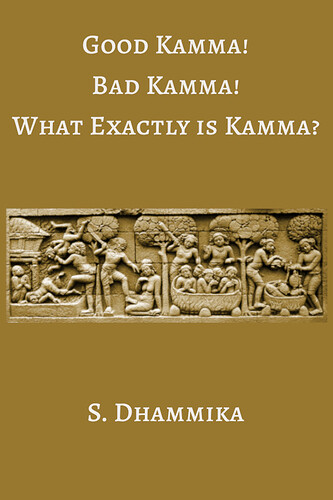 This book deals with kamma and its related doctrine of rebirth exclusively as they were explained by the Siddhattha Gotama, known to history as the Buddha and the founder of the religion called Buddhism.

One is bright kamma, one is black kamma. So, kamma can never lead to Nibbana, but is leads to relatively well-being but never to the end of suffering.

Yes. Indeed. But in Ancient Indian (4 state rather than binary) logic we also have two other types of kamma, and it is the 4th kind of kamma (the Noble Eightfold Path) that leads to Nibbana.

“Mendicants, I declare these four kinds of deeds, having realized them with my own insight. What four?

it seems it needed to happen.

Well, if it did happen, then I guess it needed to, huh? As @stu says: only thing now is to learn from it, forgive, and move forward.

Oke, and do you also see/investigate/reflect on what is the result of going with the flow for yourself and others?

Merit making is also going with the flow and it is effortless. ironically it would take effort to resist the call for merit making, such as when you see a person in need (physical or financial) and you resist your hearts desire to help a fellow human being at the time and place that the flow is calling for you to “make merit”.

I kinda can’t help it. It seems its mine “soul” lets say. So my style is like embedded on me. I don’t mean go with flow in everything. I’m really good at preventing things automatically because been meditating since I was 17 years old. Now I’m 33. But where I mean going with the flow. Is for example. I meet people on the way while driving car that I know and I would stop to give them a lift. Things like that. It seems these occurance that attract people that need help from me doesn’t happen alot.

I think I’m moving to animals

It seems these occurance that attract people that need help from me doesn’t happen alot.

I guess it’s kind of difficult that you would meet someone you know that needs a lift very often? Just by meditating, we are making merit too, we are creating peace in the environment around us.

You don’t need to process anything if you let it go.

I have a slightly different view on this as the letting go doesn’t just happen with deciding to let go or saying “I shall let go” or even “I have let go”. Processing it mentally and emotionally and realising the futility or fallacy of previously held notions would lead to letting go.