Politics and buddhism - am I missing something?

Particularly because I have worked with refugees and immigrants in the past, who have often (through a very long process) escaped violence and turmoil in order to establish a better reality for themselves and their families.

Brenna, I’d love to hear more about the work that you did with refugees and immigrant families. I’m off to Thailand in about 12 days, meeting with an NGO in Chiang Rai involved with helping refugees in northern Thailand from the Burma ethnic war. This particular NGO is involved in anti- child trafficking; the learning curve for me on these complex issues is somewhat steep. Maybe somewhere in SC ( Watercooler?) you could share some of your experiences and successes; I’d be happy to weigh in, too and there must be others on SC that have positive stories to share.

Politics and buddhism - am I missing something?

Brenna, I’d love to hear more about the work that you did with refugees and immigrant families.

Hi Michael, I’d be happy to share my experiences, but you should know that they are very limited. I was an intern at an organization that provides social/human services to refugees/asylees, and I focused specifically on helping them find jobs.

That’s excellent, Brenna. Remarkable, too, that you were focused on employment for the families that you were advocating for. A year or so ago, I was part of a NGO in Thailand that sheltered young women, and job training was a key part of keeping them safe, and out of the stream of commerce of sex trafficking. Part of what I’d like to see in Chiang Rai is the level of basic vocational training that might be offered by this NGO; that seems key to keeping these girls and young women out of predatory environments.

A year or so ago, I was part of a NGO in Thailand that sheltered young women, and job training was a key part of keeping them safe, and out of the stream of commerce of sex trafficking

That’s wonderful, Michael! That was what I experienced while working for this organization, that empowering people to have their own stable source of income is an important step in establishing quality of life. Without a source of income, they were largely dependent on the government for income, which was unstable unto itself.

Education is also a tremendously beneficial step, particularly for those who have had little access to education. There is an evaluation of a program conducted in Ethiopia with the intention of reducing child marriage, which is a common practice. They found that providing safe social spaces for the women combined with access and continuation of education was a necessary and beneficial combatant.

Brenna, you’re giving me some excellent points of reference for my trip; thank you so much. Yes, the education component is key, too. I have seen in some cases that kids from Burmese Hill Tribes, once they had access to schooling in or near their village, learned enough Thai to be admitted to Thai schools. From there, some later went on to university.

I did a quick search and found what appears to be the full article for the link you provided. Thanks!..am going to read it tonight. https://www.guttmacher.org/journals/ipsrh/2009/03/evaluation-berhane-hewan-program-delay-child-marriage-rural-ethiopia

I have seen in some cases that kids from Burmese Hill Tribes, once they had access to schooling in or near their village, learned enough Thai to be admitted to Thai schools. From there, some later went on to university.

I’d love to do the kind of work you’re talking about. Do you work with Rohingya/Muslim refugees that are fleeing persecution in Burma?

Brenna, I started in 2010 when I lived briefly at a wat in Chiang Mai, and had contact with refugees from Shan State that lived in northern Chiang Mai. I was a samanera, and part of my duties was teaching English phrases to hotel and spa workers, so that they could communicate with tourists from Europe and the US. From that I graduated to working with a NGO in Thailand devoted to anti-child sex trafficking. Now, I’m collaborating with a large BKK based NGO that has started an operation in Chiang Rai. So, most all of the children and families will be Shan, Karen, Lahu and other Hill Tribe refugees from the war in Burma.

Brenna, there are a lot of opportunities in Thailand to work with Burmese refugees, with some very well organized NGOs. I hope you get a chance to explore the idea. Thailand is lovely beyond words, and the people just as lovely.

You wouldn’t happen to know my friends Pon and Annette from Eagle House in Chieng Mai, by any chance? They have also worked in this area.

Bhante, I’ve not met them. It’d be great to meet up with them sometime; I’d welcome the chance to learn more about them. I just checked out their website: looks great and great location.

Pon has been involved as a representative for the North of Thailand in implementing the new more egalitarian constitution (1997). At present he is organising the ‘anti-corruption in Thailand’ movement in the North. Annette is a founding and active member of the Women for Tomorrow’s Politics, which aims to encourage Thai women to become aware of and exercise their consitutional and political rights. Annette also enjoys talking with Eagle House visitors about the concerns of local communities.

I definitely should stop by and say hello.

They would love to hear from you: do say hi from me! Pon was the first person to tell me I should be a monk.

Last time I saw them, Annette was working with a mae chi monastery south of Chieng Mai, where refugee girls were taken in, sheltered, and given a loving and broad education. Unfortunately, I never got to visit. She was helping to provide tutors and English teachers from her contacts among the travelers and expats.

Pon is mates with the guys from Caravan:

Caravan (Thai: ฅาราวาน, RTGS: Kharawan), is a Thai folk-rock band that formed out of the 1973 democracy movement. It launched the phleng phuea chiwit (เพลงเพื่อชีวิต, lit. "songs for life") genre that has since been popularized by Carabao. Surachai Jantimatawn was the band's primary vocalist and songwriter. He also played guitar. Wirasak Suntornsii played guitar and also did occasional bass and lead vocals. Mongkhon Uthok sang lead and played phin (a Thai stringed instrument), harmonica, wut ...

Like them he was part of the student resistance in the 1970s, and as you note, continues to work in the pro-democracy movement: which must be pretty demoralizing right now.

Of course, I will say a big hi to them from you. Wow…I just read the bio of the band Caravan on the link you provided. They must be a very interesting and positive couple! I am sure there will be a few days that I’ll be on a walkabout in Chiang Mai, and I’ll be sure to connect with them. It’ll be great to learn more about the shelter that Annette is supporting.

I remember being in a coffee shop near Tha Phae Gate in 2010 and met a business owner from Michigan USA. He told me that he had sold his company, and came to Chiang Mai for a three week visit. “That was five years ago,” he told me. Chiang Mai is such an amazing, dynamic place, and I am glad to learn today of two more (Pon and Annete) amazing people there.

Bhante @sujato, I spent part of the morning with Annette. She couldn’t have been nicer and more interesting.

She sends a big hello, and said that she is very proud of you. She said this in a way that a sister, or family member would say. I sensed that the time that you spent at Eagle House is very special to her. 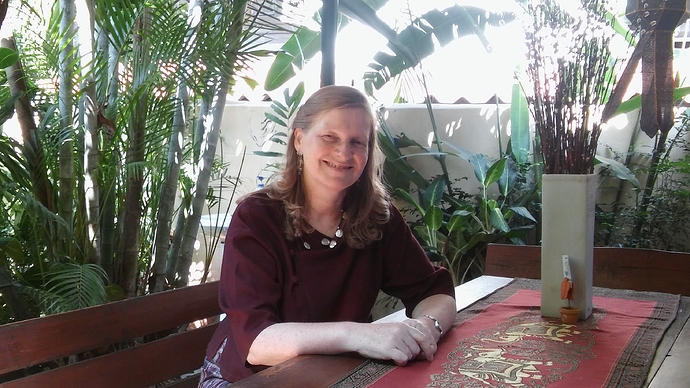 Wow, thanks so much. It was indeed a special time! They said they would adopt me as their son while in Thailand, and I could stay with them as long as I liked. How often does that happen with the owners of a guest house? There is something very strange going on …

So lovely to see her again after all these years. Some day I’ll have to go back.