A Hierarchy for disagreement

Following this hierarchy, Graham notes that articulate forms of name-calling (e.g. “The author is a self-important dilettante”) are no different from crude insults. 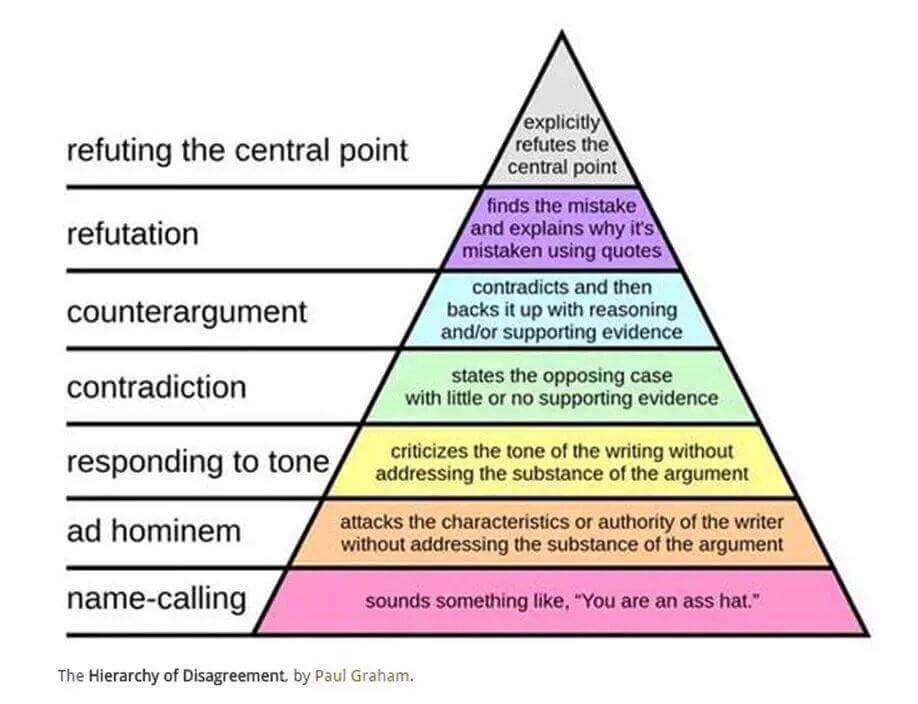 Glasl represents “escalation in his nine stage model not as an ascent to higher and higher stages of escalation, but as a descent to deeper and deeper, more primitive and more inhuman forms of dispute… [which] inevitably leads into regions that evoke great ‘inhuman energies’ which are not ultimately amenable to human control or restraint.”[2]
In the first level both parties can still win (win–win). In the second level one of the parties loses and the other wins (win–lose), and in the third level both parties lose (lose–lose).

Friedrich Glasl's model of conflict escalation assists in the analysis of conflicts. Appropriate reactions can be derived from this analysis. The model has nine stages – in contrast to the earlier model of Kurt R. Spillmann, which describes five distinct stages of escalation. These stages are grouped into three levels, which each contain three stages. Glasl represents "escalation in his nine stage model not as an ascent to higher and higher stages of escalation, but as a descent to deeper and de...

I found the above when researching on how to foster productive and constructive dialogue at work. I share it here with the intent of not only inspiring others to stay “above the line” but as well invite others to share similar frameworks for dialogue and fruitful conversation.

As someone involved in something of an Internet forum dispute a while ago with another user regarding textual studies of another religion (not Buddhism), I can say that these guidelines work. I have seen many similar threads go much more haywire, but participants can always keep conservation civil through the simple act of caveating: one simple “IMO” or “AFAIK” can make all the difference.

Well said. An interesting related link on the topic is:

The epistemic virtues, as identified by virtue epistemologists, reflect their contention that belief is an ethical process, and thus susceptible to the intellectual virtue or vice of one's own life and personal experiences. Some epistemic virtues have been identified by W. Jay Wood, based on research into the medieval tradition. Being an epistemically virtuous person is often equated with being a critical thinker.

I risk saying that framing the Dhamma in terms of noble truths which call for ennobling tasks to be taken individually was a beautiful example of epistemic virtue by the Blessed One.

Paul Graham is a computer scientist and noted entrepreneur – which explains something of the nature of his suggestions.
Particularly worthy of note is Graham’s discussion of his highest level “refuting the central point”. A key to this level of productive disagreement is to explicitly identify what you think the central key point or points are.

It is important to emphasise that while some of these principles may seem obvious and agreeable two observations of humans apply (even to Buddhists).
1) While this type of explicit transparency may seem obvious, natural, and desirable , very few persons have the skill to carry it out in situations that are personally difficult or somehow threatening. Difficult or threatening meaning that one retreats into a ‘defensive routine’.
2) Most persons are unaware at the moment that they have slipped into a ‘defensive routine’ inless someone else points it out. Other persons (persons other than the speaker) are much more likely to quickly observe a shift in the style of communication. That is, we have individual blind spots.

IMO the most important quote of Grahams article is

The most powerful form of disagreement is to refute someone’s central point.
… Truly refuting something requires one to refute its central point, or at least one of them. And that means one has to commit explicitly to what the central point is. So a truly effective refutation would look like:

The author’s main point seems to be x. As he says:

But this is wrong for the following reasons…

I would note that it is possible that different persons would not agree on what they see as the ‘central point or points’. The identify this difference of perception early on is usually a blessing .

I wrote about some of the most powerful investigation and commentary regarding productive communication I know of at:

Aṅguttara Nikāya 3. Book of the Threes 101. The Dirt-washer QUESTIONS: Is it reasonable to read “not wanting to be despised” as meaning wanting to be thought of as competent? And also wanting to think of oneself as competent? POSSIBLE PARALLELS with WESTERN RESEARCH Threat to our competency as a driver of unproductive and counter-productive speech. Harvard social psychologist Chris Argyris spent much of his career studying the factors that made for productive and counter-productiv…

I regard this perspective as powerful because it addresses some of the how and why behind the difficulty nearly everyone has consistently practicing productive communication and right speech.

I particularly recommend this page:

In broad terms effective and productive communication and disagreement:

In these terms ‘winning’ might mean persuading others by offering the reasons that they (the other person) finds compelling and convincing. That is, the reasons given meet their standards for what causes the listener to be become internally committed. Thus, it is a form of persuasion that respects individual choice including each individual’s type and level of evidence, reasoning, etc required to compel agreement or action. The speaker /advocate cannot expect that what they feeling is ‘compelling’ to be equally compelling to the listener.

Relevant to suttacentral.net – I believe the EBT evidence a form of teaching and persuasion that is in alignment with, and often motivated by, the type of advocacy I’ve outlined.

What It Means
Now we have a way of classifying forms of disagreement. What good is it? One thing the disagreement hierarchy doesn’t give us is a way of picking a winner. DH levels merely describe the form of a statement, not whether it’s correct. A DH6 response could still be completely mistaken.
But while DH levels don’t set a lower bound on the convincingness of a reply, they do set an upper bound. A DH6 response might be unconvincing, but a DH2 or lower response is always unconvincing.
The most obvious advantage of classifying the forms of disagreement is that it will help people to evaluate what they read. In particular, it will help them to see through intellectually dishonest arguments. An eloquent speaker or writer can give the impression of vanquishing an opponent merely by using forceful words. In fact that is probably the defining quality of a demagogue. By giving names to the different forms of disagreement, we give critical readers a pin for popping such balloons.
Such labels may help writers too. Most intellectual dishonesty is unintentional. Someone arguing against the tone of something he disagrees with may believe he’s really saying something. Zooming out and seeing his current position on the disagreement hierarchy may inspire him to try moving up to counterargument or refutation.
But the greatest benefit of disagreeing well is not just that it will make conversations better, but that it will make the people who have them happier. If you study conversations, you find there is a lot more meanness down in DH1 than up in DH6. You don’t have to be mean when you have a real point to make. In fact, you don’t want to. If you have something real to say, being mean just gets in the way.
If moving up the disagreement hierarchy makes people less mean, that will make most of them happier. Most people don’t really enjoy being mean; they do it because they can’t help it.