I spent a few hours in Calcutta in 2015, while in transit from Delhi to Hyderabad. In the Indian Museum, among many wonderful and fascinating objects, this medallion design captured my attention. A troop of monkeys, assigned to remove a fusty booger (?) from the nose of a patient bodhisattva, using an elephant! As I had no time to make further enquiries while there, perhaps anyone here may know something about these carvings, and perhaps has something to say about this particular design. I gather that it is an illustration of a jataka story. Does anyone know which story?

Other than that, it’s a jolly scene, and a reflection of the sense of humour that was prevalent in the Bharhut Buddhist establishment of the Shunga period (mid-2nd century BCE). 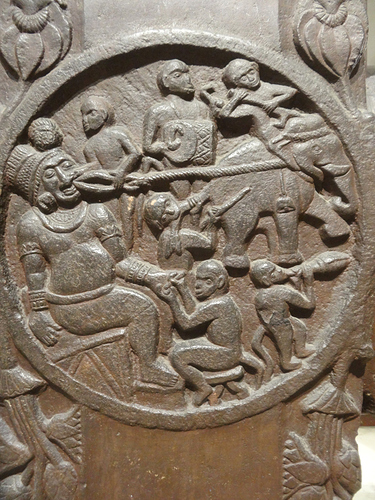 Bhante Anandajoti over at Ancient Buddhist Text is very knowledgeable about Jataka iconography if you don’t get an answer here.
https://www.ancient-buddhist-texts.net/Miscellaneous/About.htm

Thanks you. I will definitely ask.

Okay, this definitely needs an answer!

Is it a nose job or tooth extraction?

Okay, I will go with that. I found a reference to the scene in V. D. Mahajan’s book, Ancient India that interprets it like that. However… I am convinced that there is some “monkey business” involved in the tale. Look closely at the monkey in charge of the forceps. He is definitly lifting a nose flap there and not a lip.

You’re right. … But then, whoever would trust a monkey? … Rama and Sita, I suppose, but nobody else.

Although, thát was a special monkey! Oh, have a care. There is the monk Tripitaka in the Journey to the West. He trusted a monkey, but not without trepidation.

Look closely at the monkey in charge of the forceps. He is definitly lifting a nose flap there and not a lip.

Probably removing a nose hair. I have the same problem.

Moral of the story: Don’t bring in an elephant for what you can do with a tweezer.