Am I wrong to say that the highest goal in buddhism is not buddhahood but arahantship?

Continuing the discussion from Was the buddha a once returner in his previous life?:

Can you help me to find the truth ?

No there isn’t! Amazing to think about.

In Theravada, the only real difference between Buddhahood and arahantship is that a Buddha discovers the Dhamma after knowledge of it has been lost and then attains enlightnement, while an arahant attains enlightenment following the instructions of a Buddha. Mahayana is a different story, though.

The Buddha taught the way to the end of suffering. While knowledge of the Dhamma still exists, that’s arahantship.

Am I wrong to say that the highest goal in buddhism is not buddhahood but arahantship?

If by Buddhism, you mean all of Buddhism as it currently exists, then of course, Mahayana disagrees with this view.

Furthermore, traditional Theravada also accepts the three vehicles, as Buddhaghosa says that there are three main soteriological paths: the path of the Buddhas (buddhayāna); the way of the individual Buddhas (paccekabuddhayāna); and the way of the disciples (sāvakayāna). This idea was also accepted by almost all the early Buddhist schools, Sarvastivada, Mahasamghika, etc.

So in Theravada, the highest goal is still Buddhahood as far as I know, and the bodhisattva’s journey to Buddhahood is a big part of the Jataka and vamsa storytelling tradition, which a beautiful and valuable part of Theravada, even if it’s not EBT. 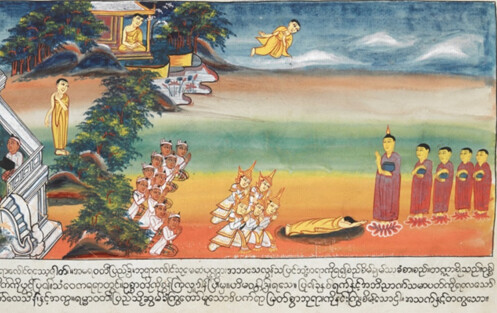 So it seems the three vehicles idea is pretty old and goes back quite far, since it was shared by most of the major Buddhist schools.

I am not quite sure what the earliest text we have is that discusses the idea however, but you’re right that its not an EBT idea. However, its definitely Buddhist. In fact, its the majority view among the Buddhist schools throughout history.

Interestingly enough, later Mahayana collapsed the three vehicles into one vehicle, ekayana (all paths lead to the same goal, buddhahood in this case, as explained most famously in the Lotus Sutra, the king of Mahayana sutras), and this is pretty much the standard view now in all of Mahayana. So basically, now Mahayana accepts that all Buddhist paths lead to one goal (which is closer to early Buddhism in my book), while scholastic / Abhidhamma Theravada does not (since they still accept Buddhaghosa’s philosophy as orthodox).

In the EBT’s, the Buddha doesn’t really seem to teach any separate path to buddhahood. He was already the Buddha, he was preaching the Dharma, and he was founding the Samgha.

The role of a buddha in Buddhism is similar to that of a tirthankara in Jainism. They preach the Dharma and start a Samgha that is a combination of renunciants and laypeople.

After a few hundred years, it was mainstream for Buddhist traditions to conceive of Buddhism as having separate “vehicles”. That is when Mahayana texts started to appear. They took the mythical model of a bodhisattva from the Jatakas and developed it into a separate bodhisattva path.

No. The Pali texts that describe the Theravādin conception of the path to buddhahood are the Atthakathās, not the Suttas, e.g., Dhammapāla’s commentary to the Cariyāpitaka.

As for Pali texts which have the Buddha predicting certain beings’ future buddhahood, these are very late indeed - not only post-canonical but also post-atthakathā. And in these texts the Buddha isn’t reported as giving any teachings about the path to buddhahood to the beings in question. 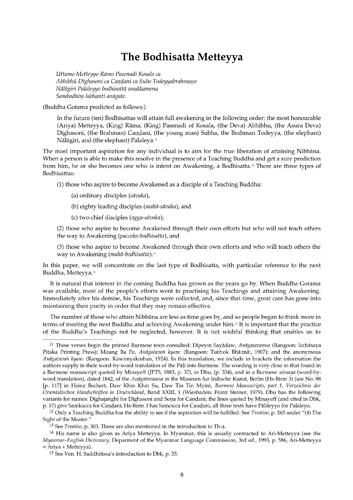 For the sources see the bibliography in the work linked to below. 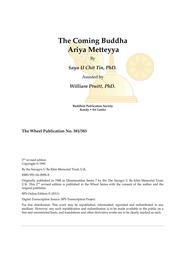 Essey about Buddha Metteyya and all that relates to Him. Published by Buddhist and Pali Society of Sri Lanka, this article is very informative.

It seems that The Buddha Gotama never teach people to set an objective or goals to either become a Buddha or Arahant. He just show us the path.

Just a reminder re Posting Guidelines.

Q&A is for asking questions that have a specific and direct answer, rather than needing discussion. When the answer is given, please mark it as the ‘Solution’ with the check box. Also note that this in an EBT forum, and therefore more narrow than the ‘whole of Buddhism’.

The Buddha is an Arahant, and they are basically the same thing. The only difference is timing.

This, bhikkhus, is the distinction, the disparity, the difference between the Tathagata, the Arahant, the Perfectly Enlightened One, and a bhikkhu liberated by wisdom.”

I think you got the general answer by now.

Buddhism in general, Mahayana, Theravada agree that Buddhahood is the highest goal.

EBT studies is a movement to just distill to the earliest suttas, and Bodhisatta path is not found here.

So it’s really more of a question of what kinda faith you wish to put in which tradition, school, movement etc. And what kinda motivation you want to bring to the table for your own personal practice. Often these 2 intermix and influence one another.

You can have no faith in Mahayana sutras, but still very much inspired to become a fully enlightened Buddha in the future, you can follow the Bodhisatta path as found in the Theravada, or aim for Buddhahood, and believe in Mahayana as it gives so much more details on how to practise for it. Or aim for arahanthood even as you have faith in the Mahayana sutras, by practising Zen for example. Or aim for arahanthood as a Theravada/EBT person, ordain etc.

There’s no issue any path you choose, that’s up to you.

One reasoning I have for myself is that if I was aiming for Buddhahood and had Bodhisattva vows before, I could evaluate just before I attain to stream entry if I remember past lives by then. So I happily aim for arahanthood, or at least stream winning. Besides, if the Mahayana sutras are true, Arahants can still become Buddhas, so no loss.

Yes but is there a buddhahood path taught by him ?

As implied by many others, if you believe in the Mahayana or Theravada, yes, that path is called the Bodhisatta path, you train in the perfections (paramis) and have the wish to attain to Buddhahood, even if it means delaying your own arahanthood until many lifetimes later.

If you only believe in EBT, then no, no clear path to Buddhahood.

I think in EBT Buddhahood is arahanthood. The Buddha is a teacher of his disciples, who follow his path for the cessation of dukkha, and have subsequently attained of it.

The Buddha showed us The Path but not told us to aim for The Path. When we walk The Path, Liberation will reveal itself. But when we aimed for The Path nothing reveals.

Without going into deep details. Becoming a SammasamBuddha is the highest attainment in Buddhism.

I mean, even the four path schema has been seen by some as being a late idea. So I wouldn’t be so sure the historical Buddha taught even that.

Becoming a SammasamBuddha is the highest attainment in Buddhism.

I mean, even the four path schema has been seen by some as being a late idea. So I wouldn’t be so sure the historical Buddha taught even that.

I did not know this. Can you point me to any resources or discussion about this?

Edit: I found this paper in which he discusses it (its behind a paywall however).

Apparently, from the abstract, he actually disagrees with the scholars who claim this, and instead argues that it is early. I know I read this somewhere else, but I do not remember the scholars who say it is late, and I don’t have access to this paper at the moment.