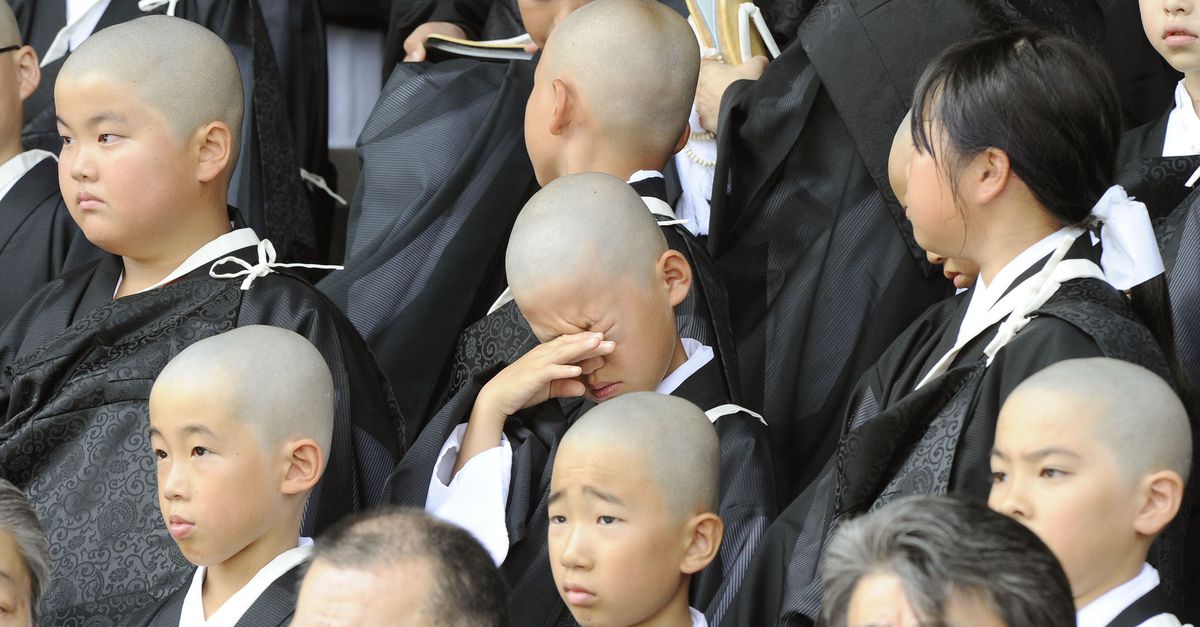 "Mr. Monk delivery" was created to send monks to funerals and rituals amid the decline of Japanese Buddhist temples.

“There is no point being a monk,” he said, “if we can’t offer a helping hand when someone needs us.” Kaichi Watanabe, the 40-year-old monk dispatched by Amazon to a memorial ceremony

It seems to me that Amazon has mastered the art of matching demand with supply, and pricing that supply and delivery advantageously. Old forms of commerce, even in the spiritual field, are being usurped by these models of efficiency. So, the Japan Buddhist Association might consider getting on the stick and forming its own nonprofit internet hub for funeral, wedding, and counseling services. The JBA could offer these services on a dana basis or at prices comparable to what Amazon charges, and provide a higher level of personal service and comfort to people needing a monastic intervention in their lives.

I guess the point of all of this is that the typical crappy opportunistic capitalist forces will always fill a gap when one is created by complacency, or by unmet demand.

The Buddha’s model of an intimate, community centered and supportive Sangha is the “gold standard.” I hope that as the need for authentic Dhamma and Vinaya in the west grows, that pathways open for access in the West for Bhikkhus and Bhikkhunis to practice and build communities, and that EBT Buddhism in the west never becomes, as is the case in parts of Japan, a neglected funerary enterprise. It’s my feeling that the Dhamma/Vinaya is the antidote to the West’s consumer driven suffering; kind of the Jonas Salk vaccine for the former pandemic of polio. I hope that notice is taken of what is occurring in Japan, and that the path of progress for the Dhamma and monasticism in the West avoids stagnating the way that it has, arguably, in Japan.

I would be a rent a monk, as long as I could be delivered by an Amazon drone!

I guess the point of all of this is that the typical crappy opportunistic capitalist forces will always fill a gap when one is created by complacency, or by unmet demand.

I am a person who see the silver line in the rain cloud.
There are meditation centers in US charging USD 5000.00 for a three months retreat.
This is not as bad as it seems.
I think this gives some value to the undervalued services of a Buddhist monks.
This also help to eliminate people who want to become monks for financial reasons.
On the other hand, I do not think that the funeral service is a duty of the Buddhist monk.

There are meditation centers in US charging USD 5000.00 for a three months retreat.This is not as bad as it seems. I think this gives some value to the undervalued services of a Buddhist monks.

Well, as a former staff member of the aforementioned meditation center I did appreciate having health insurance. But it does seem that the greatly increased popularity of meditation has been accompanied by a greatly increased consumer culture at some of the Western dharma centers. Still, I’m happy to report that so far you can’t get a massage or facial at IMS.

I was at Wat Metta a few years ago talking with one of the younger Bhikkhus who mentioned that Ajahn Geoff (Thanissaro Bhikkhu) commented at one such center that they were not right to charge such fees for Dhamma talks. The tony California dharma center solved that sticky issue by never inviting him back again.

It is important to note that the teachers who lead retreats at places like IMS do so without being paid. The money retreatants pay goes towards providing food, housing, utilities, and as @Suravira mentioned, paying their staff and offering benefits.

I’m unsure as to which center was being referenced at Wat Metta. I do agree that it’s fair for dharma centers to charge guests reasonably for overhead and to compensate staff fairly. If IMS has a policy of dana only, for the teachers, that is commendable.

Buddhism is practiced in many levels.
It appears this is a practice of very grass root level.

Tan Geoff does teach at the center I am at now, and it is a “dana” retreat, meaning there is no charge. People can offer what they want at the end, if they feel so moved. But we have some very generous donors, or we wouldn’t be able to afford the dana retreats for very long. I am so grateful because there are so many people who wouldn’t hear the dhamma otherwise. On a regular course/retreat about half our costs are covered by the fees and half by dana.

I have my disagreements with Tan Geoff, but I really respect him for standing firm on that issue. Then again, though I agree that the monasteries are ideal for some people, I was recently at the Forest Refuge and there were nine nuns sitting retreats (out of 30 total spaces.) Most were from Asia and they were there because there aren’t that many good places for women monastics to do retreats- esp. of course Bhikkhunis, since they are not recognized in Burma or Thailand.

So anyway, back to @Anagarika’s original post, the presence of monastics is incredibly valuable to remind us that there is another way to live.