Are we ever bad at observing the Uposatha

Thank you so much for this really wonderful topic, Ven. Subharo.

For some circumstantial constrains I’ve found observing the Uposatha not entirely feasible in practical terms and this has given rise to a general forgetting about it/slackness with regards to it. I’ll endeavour to use your post as a corrective and seek workable options.

In terms of the practices themselves, I’ll pause on two:

[Recollection of] Our own virtuous behaviour, to the extent that we become joyous

As a general point (rather than one specifically linked to the Uposatha), I’ve previously considered raising this as a topic and inquire if there is anywhere it is handled in technical detail. Embarrassing though it is to admit, I’ve always found this a bit of a stumbling block and never really managed to rouse any notable joy in connection to observing the precepts - they’re just obvious (from my pov) undertakings to commit to. Naturally, it’s a bit of a tricky issue to me as, as far as my reading of the Buddha’s teaching goes, joy from virtuous conduct is pretty foundational.

That the virtuous behaviour that resulted in various deities attaining to their own heavenly rebirths is similar to the virtue one posesses, as in, presumably the very same joy mustered up from the previous step (making one furtherly joyous).

One thing I find a bit intriguing about AN 3.70 is that it seems (might just be my reading) to advance aspiring to rebirth in the heavenly realms as a the key point of focus for lay folk, which just strikes me as odd. For me, such an aspiration makes a lot of sense in eg. MN 60 which is addressed to householders as a broad group. But AN 3.70, quite clearly seems to have disciples of the Buddha (who teaches a total end of suffering is way superior to rebirth as a deva) as its audience. In turn, I’m wondering how to interpret this, as the prospect of rebirth as anything (knowing that it ultimately entails suffering) doesn’t readily inspire joy.

Wasn’t the Buddha a master of prescribing pinpointed teachings to each and everyone, and wouldn’t teachings like that also be considered a personal ritual if followed?

I’m guessing that if a given layperson/monk/nun was able to attain to any sort of Brahmivihara or Jhana on an Uposatha (and not necessarily Brahmaviharic-grade joy), then the Uposatha would be acceptably “ennobled” (for example, see AN 1.394-401). Visakha in particular was known to be a really big donor towards the Sangha, so she had lots of past merit to easily remember and get joyous about.

The other parts of the Uposatha seem to serve the functional purpose of recollecting who it is in Buddhism who is the most worthy of respect, and why (as in, the Buddha, and the Arahats, and how it is that they’ve perfected themselves which is apparent, and super-normal in virtue, compared to average people). Furthermore, the ability to attain to Brahmaviharic and Jhanic states (which will lead one onwards to a heavenly rebirth, if not Nibbana) virtually always do not exist in a vaccum. They originated from somewhare (The Buddha, Dhamma, and Sangha), so credit should be given where credit is due.

There are wholesome and there are unwholesome rituals, and the practitioner have to decide what is best for his or hers pathwalking

I don’t like to preach. First of all, I’m not qualified, but second of all, I find that thats what “Buddhisming” on the internet all too often turns into, and often unintentionally.

We all want to find “the truth”. That involves hypothesizing as to that truth and testing.

I don’t know if the Buddha also said that. Thats just me trying to put things together.

It’s all just IMO, and thats fine by me - and when it comes to rituals that is regarded as insignificant by most of the western practitioners (that i’ve heard and met in person) - i have my own experience with by just forgetting about what is thought and said by others, and just done them - and the positive results for my own practice is sure, so in that sense is my take on this matter that no rituals are “bad” or unwholesome, it’s all up to how one “holds” them in one’s overall practice of the eightfold path

Be a lamp on to oneself

And I like to add that I don’t care if anybody finds me preaching … , because i see that being also a kind of “ritual” …

Embarrassing though it is to admit, I’ve always found this a bit of a stumbling block and never really managed to rouse any notable joy in connection to observing the precepts - they’re just obvious (from my pov) undertakings to commit to. Naturally, it’s a bit of a tricky issue to me as, as far as my reading of the Buddha’s teaching goes, joy from virtuous conduct is pretty foundational.

I find this difficult too. Sometimes I get around it by recollecting the feeling that comes right after a good act, or the general feeling of periods where my behavior has been particularly good.

Or for example with generosity, recollecting the feeling from being generous rather than any particular events or episodes.

In this way, a specific memory is more like a pointer to remember the feeling of inspiration and joy that comes during/after a good act. And then just focusing on that, building it up in the mind.

Something to try maybe if you haven’t already

I liked what I read of your essay, I skipped the rest after the reference to the four great kings.
Is the uposatha the new moon and full moon days? Thanks for the info bhante.

Is the uposatha the new moon and full moon days?

Using the above Buddhist Calendar (best mounted on a cork-board, I guess), here is today’s date (according to my Sri Lankan Monk friend):

According to my door chart, today is
(Wed) April 11 (2018)
Year 16 Soṇa 2561
Gimhāna Utu (its Hot)
Vesākha Māso (last month of the year)
Kālapakkha (moon is waning)
3rd Uposatha approaching, 2 have passed in this season and 7 remain (because of the leap-month, otherwise would be 5)
Ekādassamaṃ (11th)
Budhavāro (aka Odin’s day aka Wednesday)

So if I had some red push-pins, here is what the wall calendar would look like today: 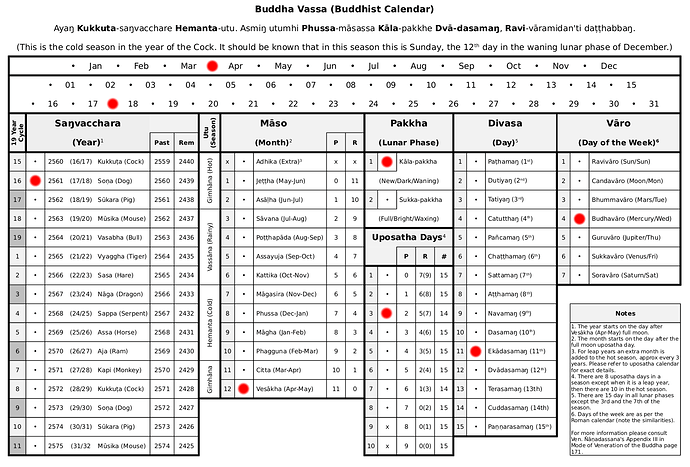 If you want to be a Buddhist super-nerd and understand the Vedic way of using lunar calendars (which apparently originates from the Greeks, I’m informed), then reading Appendix III in this PDF is recommended (drink like 2 coffees first, or you might fall asleep), see PDF’s pages 189-207, internal numbering pg. 171-189:

That’s the default Pali chanting book of Na Uyana, BTW, a monastery where I stayed in Sri Lanka.

Uposatha is rarely kept even in traditionally Buddhist countries like Sri Lanka, AFAIK. There may be monthly 8 precept observance days where a lot of dhamma teachings take place, with a little bit of meditation. These are monthly ‘Sil’ (morality training) days, supplanted in more western settings by meditation day retreats.

I don’t know if Uposatha has run its course- except for those who do keep it of course. Buddha even had problems getting people to keep it - even people like Mahanama who was well renowned in the dispensation.

Here’s a link for a good Dhammayut (the other Thai sect) uposatha calendar:

Thanks for that. I like how it shows several traditions, all in one place.

It should be noted that:

Here’s sort of what the next Uposatha full moon will look like, up in the sky, as seen in Stellarium (In my location, it will be below the horizon, shown by the green line, and unfortunately during a time of sunlight, but Stellarium can “cheat” and show it to me, anyway): 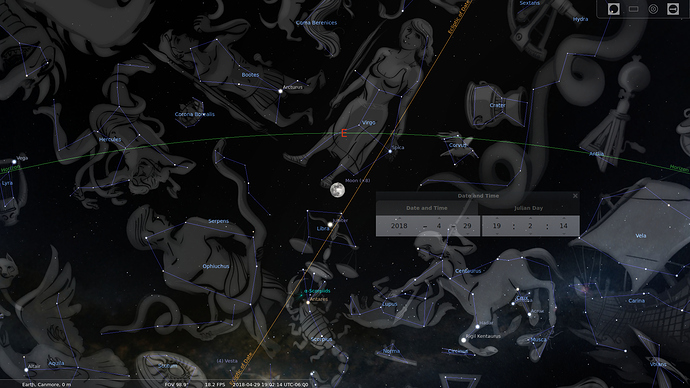 The zodiac signs give you a sense of what part of the sky is getting looked at.

There’s an “Uposatha Observance Club” over on Dhammawheel.

Can someone explain how to read this calendar

I have been trying to find the most precise information on how to keep uposatha on the proper days, according to the time of the Buddha (I assume which would be ideal)

In accordance with the vinaya quote I keep the 8th, 14th and 15th. Also the second fortnight after the Chinese lantern festival

Sorry it’s not true that the Buddha was not a friend of rituals. He taught that sīlabbataparāmāsa was a fetter, which does not merely equate to ‘rituals’

Thanks for the reminder Bhante

I’m learning that with rituals we can impress the subconscious mind. It’s very necessary. And Buddha knew it. The way he is decribing the gods might be to modern spiritualist garbage. But it doesn’t matter that you believe. See it as saying a way to impress the mind so as to keep the mind interested in keeping that day holy because hey this sounds good.

But I see sun and moon being mentioned. Which is light and darkness. Good and Evil. Buddha and Mara. Subconscious mind and conscious mind.

The symbolism of full moon is that of Middle Path which brings us to what we want(Happiness) that is subconscious mind connecting with the conscious mind. The sun light to moon. So monks do walking meditation on full moon to ground themselves. The two feet on the ground presents the duality again. And grounding the right way will depolarize yourself. I’m saying this. But now I understand why I experienced my meditation better while I was around Sri Lanka Vesak celebration. Been walking barefoot. So depolarization is making that circuit in you body so as to connect the Earth with the Mind. Giving bliss faster. That’s why thinking heavenly is just a way to impress the subconscious mind. Which is the light of consciousness.

The problem with the lunisolar calendar is that it’s not universal. It works when you live in the tropics, but not once you venture outside the tropics towards the poles.

The system of timekeeping which is popular today has the virtue of working really decently no matter where you are on Earth, not just the tropics. All our gadgets operate by it.