I’ve started a list of projects that use SC’s resources. Check it out! If I’ve missed anything, let me know. 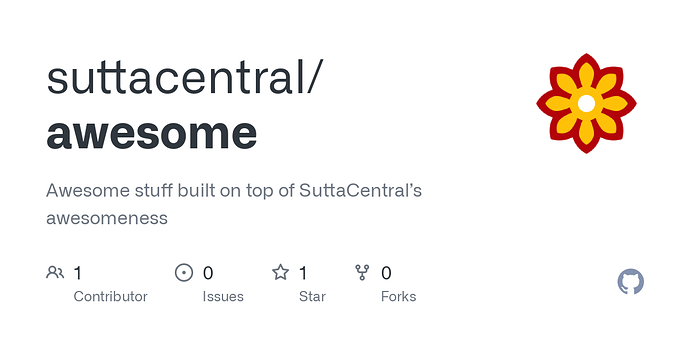 Indeed they did! “Someone” being Ayya Vimala with the Uni of Hamburg.

Well, Pāli Wordle is built on SuttaCentral data. But it’s far from “awesome” so I won’t say you missed it

I beg to differ, it most certainly is awesome and is added!

I think @Paliaudio.com is also using the SuttaCentral data as the basis for their readings

Came here to mention that. Not all of them are, but most are.

Bhante @sujato, I’m humbled that you would put readingfaithfully.org on the list. You don’t mention the strongest connection with SC, namely the ebooks. And if your new publishing project doesn’t include Pali-English texts, then you won’t be putting me completely out of business.

Dharmaaudiobooks.com have also used Bhikkhu Sujato’s translations for their audiobooks of the Digha and Anguttara nikayas - these can be purchased via audible.

Oh, thanks so much, I’ve added this.

At some point I’ll get around to making the Awesome list more prominent on the SC Home page.

Just waiting for it to be finalized.

Are you also adding things in non-English languages? Dhammaregen would be one.

Yes of course! I’ve added it.