We are very happy to announce that Ayya Kathrin Vimalañāṇī’s Bhikkhuni ordination will take place in March 2018 in Los Angeles, with Ayya Gunasari from Mahapajapati Monastery as her preceptor.

Thus Tilorien Monastery will soon have two bhikkhunis to support each other in their practice!

Ayya Kathrin has been a nun for over three years, living and practicing with communities on four continents. May her ordination be an inspiration to her and to many people!

If you would like to support this by making a contribution towards travel costs and other expenses for the ordination, please do so with the account details on the Samita website, mentioning “Ayya Kathrin” in the reference. 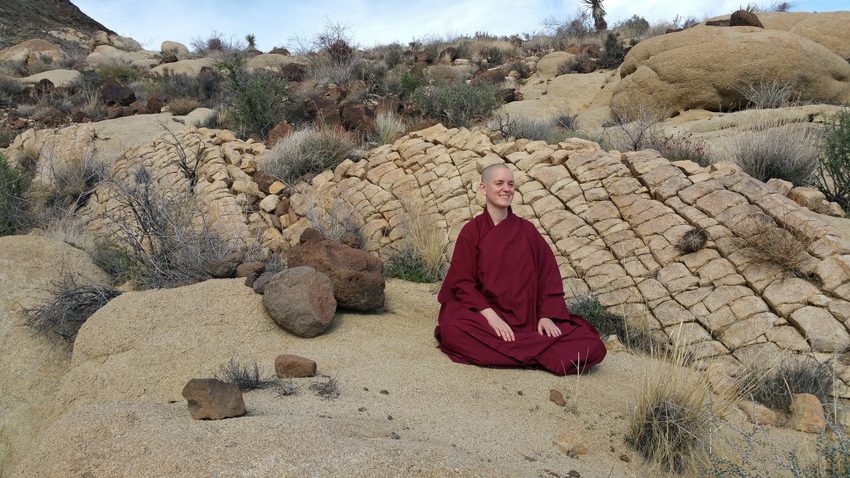 Congratulations to Ayya Kathrin, and to you and everyone at Tilorien for making it possible.

Sadhu Sadhu Sadhu! It is such excellent news and it was so excellent to share Ajahn Brahmali’s retreat with her in Germany. Congratulations Ayya Kathrin!

For those interested, here’s the link to the site for Ayya’s preceptor, Ayya Gunasari http://www.mahapajapati.com/our-abbess.html

In 2003, Ayya Gunasari was ordained as a bhikkhuni in Sri Lanka. Following her full ordination, she returned to the United States to live. She stayed in various dhamma centers and in a supporter’s garage. It took years for her teacher, Sayadaw U Pandita, to recognize her as a bhikkhuni, but eventually he did. In 2006, she was named an Outstanding Woman in Buddhism at the United Nations in Bangkok. In 2007, she was a speaker at the First Global Congress of Buddhist Women in Hamburg, Germany. Since 2007, after being invited by Therese Duchesne to be the abbess at Mahapajapati Monastery, Ayya Gunasari has devoted herself to providing a place for women to become bhikkhunis and to practice the path set forth by the Buddha.

Although Ayya Gunasari never intended to be an abbess, she has become one because she wants things to be easier for other women monastics than they were for her. When she first ordained, her idea was to become a recluse because she had become disenchanted with life, but she discovered that being a bhikkhuni is not only about meditating. She says:

“Although I like freedom and solitude, I also like the restraints of being part of a community. It inspires me when we all get along as a Sangha, show concern for each other, and go through challenges together. Also, I enjoy giving to others in the Sangha, including those outside my immediate community. Although we may have personality differences, we belong to each other. We are sisters; we are one. The whole thing is Sangha. It is not complete on our own.”

May all your preparations be well and you find the entry into Bhikkhuni life the deep blessing that it can be for you, your community and all beings.

Is there a date in March? Are there others also receiving ordination that day?

The date is March 17th.
So far, we are two samaneris receiving ordination that day.

Thanks! Blessings on that wonderful day.

Do you currently know any of the details? At what monastery in LA and at what time the ceremony will take place? With metta.

This ist the monastery:

I think it starts around 9am and will take until some time in the afternoon.

Lovely website. I could not however find the address, except on one page found that it is in los angeles. Perhaps this is deliberate however I thought you should be aware.

@vimalanyani: Just to check, is the ordination ceremony open to the public; if we want to witness the ceremony can we just show up? Wishing you the best on your journey down the path! May you realize the supreme goal of the holy life for which you rightly go forth from home into homelessness, knowing & realizing it for yourself right in the here-&-now!

If ok, a live broadcast even off someone’s phone would be great! Only if this is not inappropriate of course.

The address and map are here:
http://www.dharmavijaya.org/contact.html

As far as I know, the ceremony will start around 9 am and will go on until 2 pm, but there will be lunch provided in between too.

Yes, everybody who lives near there is very welcome to just walk in and see the ceremony. Of course you will not be allowed inside the actual sima (boundary) for the ceremony but you will be able to see a large part of it. There are a couple of D&D people coming already!

But it’s a nice idea.

Yes, everybody who lives near there is very welcome to just walk in and see the ceremony

I really want to attend the ordination but I don’t live in California!

little bit over the top @Mat

It’s simple, now. Just point a smartphone on FB and press live - everyone’s doing it! Oops unless FB is banned, that is.

Jokes aside we should give it good coverage. Write up the local news?

I really want to attend the ordination but I don’t live in California!

You are of course very very welcome! You’d be happy to meet a few of our D&D friends in real life too!

Sure, if you want to sit there holding up your smartphone from 9 am - 2 pm! Hope you have a good battery and a good cell-phone package that does not charge you too much for doing all this

We have received some PMs and it seems that there is some confusion about the live-streaming. So I just wanted to clarify that it was a joke and there is not going to be a live-stream.
We will share some photos afterwards so you can all still see what it was like!

When we did the first ordination in Perth, al-Jazeera wanted to cover it. But the nuns said no!