Banners and Sacrificial Posts: A Parallel between DA 6 and Thag 163-164

There’s a passage in DĀ 6 The Noble Wheel-Turning King Sutra that’s remarkably similar to verses 163-164 in the Theragāthā (i.e. Thag 2.22). In the Chinese, it describes a banner erected by the future noble king Śaṅkha, who will be the Buddha Maitreya’s father in some accounts like the Divyāvadāna.

The noble king then will erect a great treasure banner that’ll be sixteen fathoms in circumference and a thousand fathoms high. The banner will be decorated with a thousand assorted colors. It’ll have a hundred corners, and the corners a hundred branches. The fabric will be made precious with a mixture of many jewels.

There was a king named Panāda
who had a sacrificial post all golden.
Its height was sixteen times its width,
and the top was a thousand-fold.

It had a thousand panels and a hundred ball-caps,
all adorned with banners, and made of gold.
There danced the fairies,
numbering seven times six thousand.

In the Divyāvadāna, the story of Maitreya and King Śaṅkha makes it very likely that what the Chinese translates as “banner” (幢) was P. yūpa, or a Brahmanical sacrificial post. The confusion likely stems from it being a foreign cultural artefact to China (and perhaps to Central Asians prior to the sutra traveling to China) and that these sacrificial posts apparently did have banners attached as decorations. The Divyāvadāna version of the story doesn’t describe Śaṅkha’s yūpa, but it does include other details that agree with DĀ 6, such as it being broken and given to his subordinates before he decides to leave home and cultivate the path. So, it’s remarkable to see this parallel in a seemingly unrelated passage in Pali sources.

If we look closely at the two passages, we can find a number of parallel details:

Overall, these two passage both seem to hand down some ancient description of a yūpa that has drifted and become corrupted by the time the texts were set in each canon.

Are you aware of this essay by Bhante Sujato, Charles? And this post? Some very strange things have crept into the texts here, and interestingly, we find them in different traditions alike.

No, I hadn’t gotten that far yet. Thanks for pointing these posts out. It was the Japanese scholars who had noticed the connection to Thag 2.22 in their translation.

One of the mysterious words in the Chinese passage is 觚, which has been translated as “corner,” as seemingly more plausible, but it also refers to a type of cornered vessel in classical Chinese. Perhaps the translator chose it as looking similar to the “ball-caps” used for these posts? It’s also notable that the coins that Sujato uses as illustrations are roughly contemporaneous with the translation of DA 6.

It would be interesting to see if the sacrificial posts with their banners morphed into common Buddhist symbols, and whether they are referenced more broadly in Buddhist texts. For example: 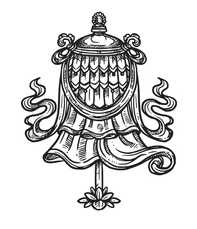 Maitreya and the “Yūpa”: Some Gandharan Reliefs (paywalled) 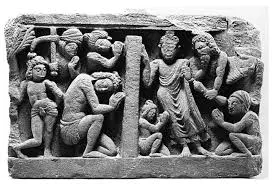 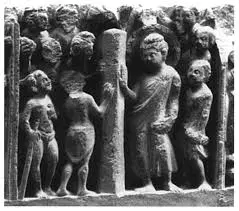 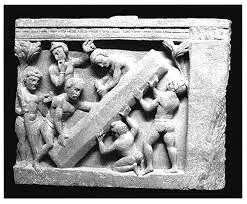 For some materials on the Buddhist treatment of the yupa and incorporation into stupas, there is an older article here by Peter Harvey: The Symbolism of the Early Stūpa. Some references to the Ashokan pillars as well here, and numerous tie-ins with Buddhist stupas…