So yesterday I wanted to quote a passage from MN14.

Using the new translation and referencing system, that passage is referenced (on the right side of the text or at the start of the paragraph) as:

In the address bar, the link to the this passage is (I removed the begiining to avoid the automatic creation of the link):

So my questions are:

Sorry if that has already been explained somewhere else, I’d be happy to just read another thread if pointed out to me!

Here is a screenshot of the passage in SC:

Good question, and the answer is not as simple as it should be. In fact, I in response to this I have rethought how we should deal with these, and if you’re interested you can read that here:

A More Systematic Approach to References on SC dev

Background SC inherits tens of thousands of texts, with probably hundreds of different referencing systems. Dealing with these elegantly and predictably is one of the hardest problems that we face. We have over the years discussed this many times, and spent a great deal of time and effort during development to get it right. Nevertheless, the system as it is is still flawed. I’ve been trying to think of ways to improve it, and I think I have an idea. The problem We inherit multiple different num…

If we can implement this, it should stop these problems from occurring.

In any case, for now, I would say: For DN and Vinaya use the pts-cs numbers, for MN use nya numbers, for other sutta texts, use sc numbers.

But if it’s just for internal referencing, it doesn’t matter too much, they will all work.

If I was writing them, I’d probably use MN 3#nya3. For now, best to create links by hand to make sure they’re handled correctly. You can do something like this:

Is there a special format to be able to create a link to SC in D&D messages like previously? or is it going to be re-enabled later on maybe?

Yes, this will definitely be redone, hopefully sooner rather than later! We’ve been focussed on getting things done on the main site, as well as Pootle integration for translations, and have let the forum slip a little. But we haven’t forgotten.

Ok thanks. Why can’t we use the SC numbers for the DN & MN? Is it because you plan to make some changes to them later on?

Ok, I’ll try to use this format from now on.

Does the space has a purpose except clarity/easier reading?

Yes, this will definitely be redone, hopefully sooner rather than later!

Awesome, this is such a handy functionality. And it forces people to use the numbering you want otherwise the link does not work: an indirect and effortless standardization of the referencing system… a clever move!

Why can’t we use the SC numbers for the DN & MN? Is it because you plan to make some changes to them later on?

What our segmented texts do is to build on these pre-existing systems and add granularity to them. So whereas Ven Bodhi might have, say, MN 4#5 (= section five of sutta four in the Majjhima) we divided it into MN 4#5.1, MN 4#5.2 and so on. So you can reference specific segments within a section, but you can still easily find the section in the Bodhi edition.

The field of Buddhist studies is plagued by incompatible reference systems, and we do not want to add one more!

Thanks for the clarification. I don’t know why I had in mind that you wanted to create a completely new referencing system which was also granular… while you seem to just want to add granularity to the prevalent exisiting one. Makes sense now!

But I don’t understand how it works presently in the texts I see online. The example you gave for example MN4#5:

You have 1 paragraph while Nyanamoli has 3…? so less granularity here actually? 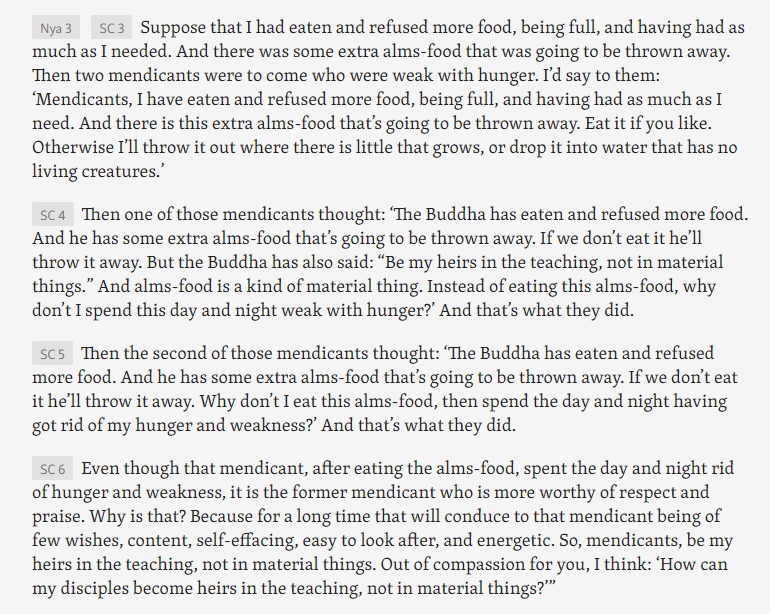 Ignore the SC numbers on the unsegmented text for DN and MN.

The granularity is added at the segment level, so you can only see it when the segmented view is enabled. On the segmented view, the numbers are labelled “SC”, but this is a bug, sorry! They should be Nya. Nya 5-7 is subdivided as Nya 5-7.1, Nya 5-7.2, and so on.

Oh I see now. The SC numbering is not the same depending on the view: ‘None’ vs ‘Side by side’ & ‘Line by line’.

Is there a way to enable the segmented view (and associated correct numbering) when only English is displayed? Sorry if this is obvious and I missed it but I cannot find how to do this yet!

Is there a way to enable the segmented view (and associated correct numbering) when only English is displayed?

No, segmented view is always Pali/English. It’s not a bad idea, though, let me think about it.