Bhante Sujato: Why I am an Anarchist

Ooh that’s much better, I should change it!

Interesting to hear of some of the similarities between anarchist self-management and the manner in which the Sangha is organised, and also the difficulties encountered when bad faith enters the picture.

My own view of social anarchism these days is that most people are not suited to living it. Some like to control others, many are happy to be led. Attempts at social reorganisation, whether anarchist or otherwise, often (always?) result in an elite minority rising to the top and exerting its power over the mass. It seems to be anthropologically unavoidable, built into our species’ software, as it were.

For me, a philosophically pessimistic individualist anarchism into which I’ve incorporated aspects of the dhamma that I find to be true, and meditation practices that I find are workable, is what pleases me. I tend to avoid groups – they often produce perturbation. My practice is a solitary one.

It seems to be anthropologically unavoidable, built into our species’ software, as it were.

I happen to think this, too. Well, history books are full of examples. But, more philosophically, I think the West’s obsession with ideal systems and structures is all wrong. It’s not the system that’s the problem, it’s the culture and morality of the people in the system that’s the problem. It’s just too subtle of a point, though, to really make it a reality, I guess. Westerners just assume too many people will be evil, and therefore a perfect system of some sort must be the answer. It’s a case of cultural blinders keeping us blind, IMO.

Yes, many imagine that feverish efforts to make wholesale changes to the social system will fix all our problems when, usually, such antics result in major stuff-ups. An observation from Blaise Pascal that I find at once amusing and wise is that a lot of humanity’s troubles could be avoided if people just learned to sit quietly in their rooms.

I don’t really think it’s an “obsession”, nor something peculiar to the West TBH. See eg. cakkavatti. FWIW, pretty much all the remaining “Marxist” states are not in the West. Regardless of to what extent they are genuinely Marxist, they still at least claim to be following a utopian system.

I agree, though, that real progress is messy and organic. The role of theory should be to simplify and highlight.

I don’t really think it’s an “obsession”, nor something peculiar to the West TBH.

I’m not sure you understand what I mean. Confucianism was an ideology that claimed that an ideal society was possible, but it didn’t attempt to do this by inventing a political structure that fashioned it into existence, nor by setting one group of people against another and waging civil wars. Instead, it was a way of instilling the idea of cultivating individuals and their social relationships into something wiser and ethical. You could call that a structure, I suppose, but it’s nothing like capitalism or Marxism, or other western political systems. It’s a bit like the humanist movement, I guess, but it was much more focused on teaching good government.

But, this is what I mean: Society needs healthy people rather than abstract theories and systems used to justify endless conflict and warfare. I guess I’m not really very interested in the ideals of a philosophy if people use them to do the opposite.

The facial expression and the title in that thumbnail really gives off a sinister vibe.
“I am an anarchist

The face and the title…a sinister vibe.

Be nice. The face belongs to a real person and we don’t make fun of people like that on this forum, bit of a low blow, you know?

The face … in that thumbnail really gives off a sinister vibe.

Be nice. The face belongs to a real person and we don’t make fun of people like that on this forum

I had read SlightlyMad’s comment to mean the editor’s choice of a steely-eyed, “gazing into the future” pose juxtaposed with a black and white photo of the anonymous masses, their backs to us, gazing up at their fearless leader…

I wonder why you thought he was making fun of Bhante’s actual face?

Well, either way @SlightlyMad can tell us himself what he meant by his comment, before we jump to conclusions.

There’s a lot going on here… Bhante @sujato, thought of you! 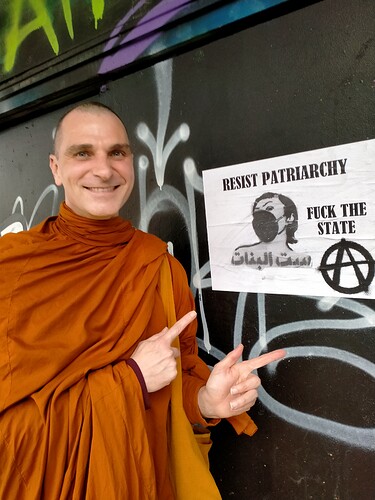