Birthdate of the Buddha - hints from archeology

Hello everyone, are you aware of the following publication that deals with excavations in Lumbini?
https://www.researchgate.net/publication/261191606_The_earliest_Buddhist_shrine_Excavating_the_birthplace_of_the_Buddha_Lumbini_Nepal

Basically in UN excavations they have found a wooden structure at the supposed birthplace of the Buddha, probably surrounding a tree, i.e. the tree under which little Gautama was born. Radiocarbon determinations of the wood date it back to 799-546 BCE. When we assume that the earliest veneration could have begun only after the enlightenment when the Buddha was about 30 years old, that would push his birth date to 830-580 BCE. If we take the parinibbana as the starting point of symbolic veneration it would be around 880-630 BCE. The question is of some importance to comparative studies when we try to estimate the relationship of the Buddha-Dhamma to upanishadic concepts and the spread and influence of meditation upon brahmanic and yogic practices. 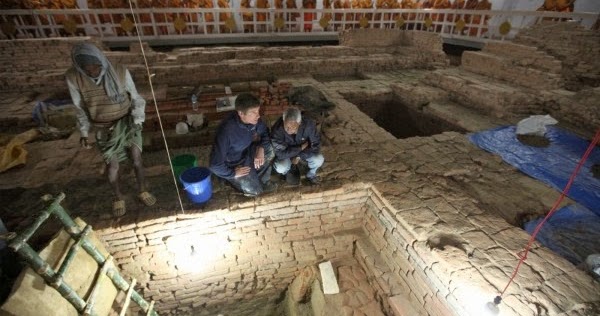 There is no doubt whatever that the find at Lumbini is significant and fascinating. But Coningham et al (and Coningham himself) have overstated the claims for what this find signifies. In particular it tells us nothing whatever about the dates of the Buddha. What it tells us about is the dates of human occupation and use of the site at Lumbini. This is intrinsically interesting, but is only an outline that requires considerable filling in. Specifically it tells us nothing about who the occupants were. The authors of the article seem to have been carried away by the minutiae of the discovery and the assumption that all archaeology on an Asokan site is ipso facto Buddhist.

We have no indication that the underlying layers were in fact Buddhist.

As I recall, scholarly consensus for the Buddha’s teaching career is 445 BCE to 400 BCE, give or take a decade or so.

Seconding @daverupa here: there seems no reason to take this revised dating seriously.

As noted in the comments to Jayarava’s article, the author of the original study has made a number of similarly spectacular claims in the past, which have not been supported by sufficient evidence to persuade knowledgeable people in the field.

This is unfortunate, as the overblown claims for the find, while attracting much media attention, obscure the genuine interest of the site.

I agree with your concerns. It wouldn’t be the first time a place of worship would have been blockupied by a new movement. Or even, why wouldn’t Mayadevi choose an auspicious place for giving birth to her child? The question to archeologists would be: What kinds of artifacts would we expect at such a place? How do archeological findings of non-buddhist tree shrines from that time look like?
You say that we have no indication that the wooden posts are buddhist. That is not quite true as the authors show that early symbols of buddhist worship depicted a tree with wooden posts around it. Asking the same question the other way around: What is the indication that it’s not buddhist? For sure it is no proof, but to open the possibility is important I think.
What looks like scholarly consensus is highly unsure. There was no new evidence presented, and basically all still refers to the Dipavamsa and the Mahavamsa and critical considerations of them. Personally I find it more valuable to give a rather big range of high certainty than a small range of high uncertainty.

What is interesting, I think, and little studied, is how the Buddhists co-opted earlier shrines and sacred sites. What changes did they make? What practices did they continue?

Schopen remarks somewhere that in many studies of ancient Indian Buddhist sites, the original report mentions in passing that underneath the Buddhist remains was evidence of prior usage, including, if I remember correctly, fire and bones. So these sites were in all probability used for animal, and maybe human, sacrifices. If this usage went on for a long time, we might find bones of ancient animals, perhaps mammoths, sabre tooth tigers, or whatever they had in India in neolithic times, which might be one source for the stories of yakkhas and so on.

But what we can say with more surety is that in the Suttas there is frequent mention of shrines, and the mendicants frequently stayed there. These would have been beautiful places cleared and maintained in the forest around big trees by the local villagers. It’s not merely possible that Maya gave birth in such a place, it’s extremely likely, as all the legends say she did, and, well, where else? I mean, it’s not like you’re going to just stop somewhere in the middle of the jungle and give birth. You’d go to a clear, safe, clean place, with water nearby; and that is exactly what the shrines were.

So if there is anything at all to the legends of the Buddha’s birth, it is safe to assume that it took place where there was a pre-existing shrine. This means that remains of a shrine don’t really tell us anything about whether it is pre- or post- Buddhist, unless they have specifically Buddhist symbols or text. Naturally the Buddhists would have continued the practices of keeping a railing and so on around the sacred tree, so this too doesn’t tell us when the Buddhists were there.

Of course, it is perfectly possible that the dating is of the Buddha’s life, and we should keep an eye on the progress of the science. However, until there is some clear signs of Buddhist influence, it won’t affect the normal dating of the Buddha, even though, as you say, this too is based on flimsy arguments.

Thanks Bhante for pointing out even more how probable it is that venerated sites may have been used by several traditions. It really makes sense that a pregnant woman of nobility would think a lot about where to give birth, and to choose a place that would have ‘good energy’, a place where good spirits live, maybe gods etc. In this perspective, to be forced (maybe by surprising contractions) to give birth at a random place could indeed be seen as a stain, a shame.

was this a custom (for nobility at least) in ancient India to give birth at a sacred place outside of a house?

Belief in ‘impurity and polluting effects of childbirth’ necessitated seclusion and confinement of mothers after childbirth in the study villages.

Impact of ritual pollution on lactation and breastfeeding practices in rural...

Breastfeeding in India is universal and prolonged. Several cultural practices are associated with lactation and breastfeeding in India, mainly revolving around the concept of ritual purity and 'hot and cold' foods, food avoidance, restricted diet...

Labouring women are isolated due to birth-related pollution beliefs.

if this is so, it may indicate that similar beliefs with regard to ritual purity of birth process and a parturient woman were held in ancient India which could preclude visitation of sacred and holy places for the purpose of giving birth

Thanks for the links. There are many such cases documented in Frazer’s Golden Bough. Some of the taboos are hilarious: when a woman is giving birth, you mustn’t sit near her with crossed legs. Obviously, this would make for a difficult delivery!

Remember that the birth on a journey is, or at least seems to be, incidental. The purpose of the journey was to return to the maternal home for birth, they just didn’t make it on time. As a part of the Buddha’s life, there is a symbolic significance to this, but the custom and intention was not to give birth in the park, but in the maternal home.

This is certainly a genuine custom. It is still, or was until recently, the case in Sri Lanka, and I guess in India, or parts of it, as well. It’s mentioned quite frequently in the various Buddhist texts, so it was clearly regarded as a normal custom. And obviously, in a certain number of cases, the women gave birth while on the journey.

It’s also certainly the case that woman have frequently been subject to sequestering and other forms of taboo at the time of childbirth.

However, I’ve never really considered whether these things are related. They may well be.

Usually you find that long standing social customs like this have a cluster of reasons and justifications, some perhaps ritual/superstition, others practical or social, some harmful, some beneficial. For example, it may be the case that childbirth in the paternal home was taboo, necessitating a long and arduous journey for the pregnant woman. But then, once home, giving birth in the maternal household would allow both families to bond with the new child.

Very interesting information. I was just speculating and am glad you could come up with links and customs. So if I understand it correctly, a childbirth under a tree on purpose would have been unusual, regardless if it was an auspicious place?

Belief in ‘impurity and polluting effects of childbirth’ necessitated seclusion and confinement of mothers after childbirth in the study villages.

Labouring women are isolated due to birth-related pollution beliefs.

What is interesting, I think, and little studied, is how the Buddhists co-opted earlier shrines and sacred sites.

In his book “The formation of Buddhist Aniconic Art” Klemens Karlsson deals also with depictions of trees within railings. While most of those depictions are found at Buddhist sites, there also other sources:

The author argues that since Buddhists and Jains followed almost exactly the same aniconic symbolism that they refer to a pan-indian understanding of symbols. He fails to prove that though with showing non-Buddhist or -Jain, purely brahmanic old temples etc. After all the Buddha and Mahavira were closely connected. The coins show that the symbol of a tree within railings was understood, or rather there was an interest to distribute these symbols (he didn’t mention the possibility that these were coins from the Asoka period for example - in this case the coins would have been Buddhist/Jain statements). But without the proper context I think that these otherwise crude coins have less to offer than archaeological sites.
To sum it up: While there has been tree worship in India before, there is only little evidence that Buddhist art co-opted the special symbol of a tree within railings (as it is found in Lumbini).