Bollée's Reverse Index of the Dhammapada

It is an entire index of all the lines of all verses of the Dhammapada, Suttanipāta, Thera- and Therīgāthā and their parallels, also including parallels from the Jaina texts, sorted in pali alphabetical order of the last word of each line.

The most remarkable thing about this is that it is done entirely by hand, typed on a typewriter and most astonishing of all: it is right-aligned. Those of us who have still worked with a typewriter would understand the great achievement of just this fact.

I cannot upload the entire Reverse Index here; it is a scanned document of 88MB. But just to give an idea of what this text of 265 pages looks like: 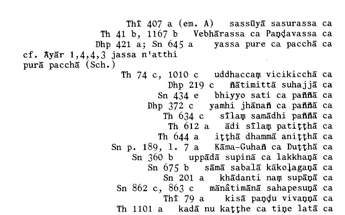 So now our SC-Next development crashed last Friday afternoon, just before the weekend, I found myself with nothing much to do until our devas return on Monday morning. So I decided to go over this index and retrieve the Jaina parallels. Call me crazy but collecting Dhammapada parallels has become a hobby for me, and in this I found an ally in Venerable Anandajoti, who sent the Index to me a few weeks ago.

So I’ve uploaded the spreadsheet I used here. Just in case there is somebody else in the world so crazy as to be interested in this. I found a total of 16 (partial) parallels with the Jaina texts, excluding parallels of just one line.
bollee.ods.zip (20.3 KB)

As for the other parallels, I think we already have most if not all on SC.

Next time I find myself in need of a hobby, I will try to write a little python program to create a similar Reverse Index. It must have taken Mr. Bollée a lifetime but with more modern techniques I think I can do it in an afternoon

The most remarkable thing about this is that it is done entirely by hand, typed on a typewriter and most astonishing of all: it is right-aligned.

Wow!
My typewriting could at best be described as hunt-and-peck.

Is there some benefit to setting this up right-aligned? The last word on the line is only marginally more accessible.

The verses that have full parallels with the Jaina texts are:

Month after month a fool may eat his food with the tip of a blade of grass, but he still is not worth a sixteenth part of the those who have comprehended the Truth.

Though one may conquer a thousand times a thousand men in battle, yet he indeed is the noblest victor who conquers himself.

For a bhikkhu practicing in solitude,
keeping company with secluded mind,
of such a one are all agreed:
“In being he’ll not be seen again”.

“With knobbly knees,
Thin, with veins matted on his skin,
Eating and drinking in moderation—
This person’s spirit is undaunted.”

Jaina texts are the Jain religion?

Did the Buddha borrow those verses from Jains, did the jains borrow them from Buddha, or were they folk wisdom in India that anyone from any religion borrowed?

Good point. I don’t know.
The Jains were contemporaries to the Buddha so it could also have been verses that already existed before that were adopted by both.

Bhante @Sujato, is there anything known about this?

Did the Buddha borrow those verses from Jains, did the jains borrow them from Buddha, or were they folk wisdom in India that anyone from any religion borrowed?

There was probably borrowing in every direction, and I don’t know if any studies have clarified this.

So I’ve uploaded the spreadsheet I used here.

Would you mind uploading the sheet in a MS word readable format, maybe docx or html? Sorry, I’m not much of a tech buff…

And is there a place somewhere to download the whole thing - archive.org or so? Thanks!

But maybe even more helpful than Bollee’s index is the entire index of verse-lines from the Pali Canon (albeit computer generated so not manually checked):
verselinesfile pali.zip (1.1 MB)

Thanks!
I’ve seen works about common features of early Buddhism and Jainism here and there, but a lot is already dated and I hope people still work on the topic to see more conclusive overviews.

If you find some more that are not listed on SuttaCentral, please let me know! I’m very interested in the Jaina parallels too.
There are more mentioned in this excellent Japanese paper on the Suttanipata but I lack the language skills to make full use of this.

Do you want some help with the Japanese? Cos I might know someone!

Okay. Ven Akaliko knows some Japanese, and also Sarah is in town I think, I will try to contact her.

Would be good if they also know Buddhist Chinese …