Bones of the Buddha: Wm. Peppe, King Ashoka and Piprahwa

Today was a rainy sping day, and I spent it inside. This gave me the chance to watch this documentary. It is fortunate that I have previously read Bhante Sujato and Ajahn Brahmali’s excellent Autheniticity text, and watched the youtube workshops on the same subject, so I had some prior familiarity with the history, the territories, and the critical role of Ashoka. This documentary brings into view some of this history and the archaeology, along with a tantalizing perspective that the Buddha’s ashes were placed by his clansmen at Piprahwa, which is not far from Lumbini. Later, King Asoka constructed a massive stupa on this exact site, and replaced the relics above the original burial site.

Falk concludes that the reliquary found at Piprahwa in 1898 did contain a portion of the ashes of the Buddha, and that the inscription is authentic. According to him, the inscription translates as “these are the relics of the Buddha, the Lord”. The conclusion is that the Piprahwa Stupa was built by the Emperor Ashoka 150 years later in 245 BCE over the original and simpler interment site created by Shakya clansmen for the 1/8th of the Buddha’s ashes they had been apportioned. Falk points to the close similarity of materials used at Piprahwa and its grand size with other Ashokan stupas, and that the coffer containing the reliquary found at Piprahwa closely reflects Ashokan workmanship, design, and the type of sandstone used for monuments like the Lumbini pillar erected during his reign. (In 1971, Indian archeologist K.S. Srivastava excavated deeper into the stupa than Peppé had, uncovering two chambers each containing a soapstone casket with redware fragments. This is taken as confirmation of the existence of an earlier, deeper burial site at Piprahwa dating back to the death of the Buddha.)

I watched the documentary a week ago, and I was part enthusiastic and part suspicious, because the documentary team didn’t really present the arguments of the opposing side and the tone was sensationalist enough to be a bit sceptical. Whether these are the Buddha’s bones or not, I am afraid we will never know. More importantly, as one of the YouTube commentators mentioned, ‘it doesn’t matter a thing’

On the other hand, it is a nice and enjoyable documentary shedding some light on the time period and cultural context that most Westerners don’t know anything about, so it seems a great idea to watch it or show your non-Buddhist friends - with some reservations

On the other hand, it is a nice and enjoyable documentary shedding some light on the time period and cultural context that most Westerners don’t know anything about

Ilya, this was the spirit in which I posted the above. Of course, there’s likely no way to determine if the relics are indeed those of the Buddha, but the doc at least takes the viewer back into the 5th Century BCE history a bit, and for those not familiar with the historicity of the Buddha, it’s a great story.

Makes me one to commit to a trip to India one day to walk and see these sites, and occupy physically the same space that the Buddha and his disciples walked.

A new website has been set up recently by the Peppé family to gather all the academic research linked to the Piprahwa discovery:

Brief introduction to the website which provides information about the Piprahwa stupa and the discovery of relics of the Buddha.

The website is very well done with easy to find information and the latest research on the subject; notably:

The timeline of the discovery and research is very useful: THE PIPRAHWA PROJECT Timeline since 1898

(Note: The older, more informal, website of the Peppé family is still live as well.) 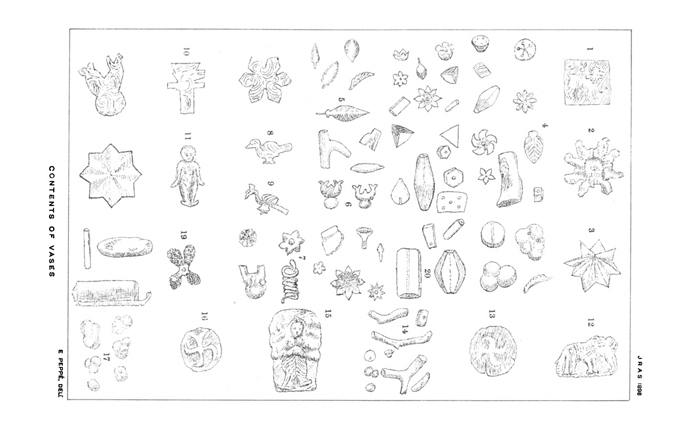 I really like the triple gem (triratna) shaped purple relics in this photo.

“Do they really think that Ashoka would have entrusted the job of inscribing that statement on the actual jar containing the Buddha’s ashes to some X craftsman? Or would he have written that himself, in his own hand - the writing of a warrior king, not of a sculptor (who BTW are far below in the caste hierarchy!)?”

I have also puzzled over that aspect. I think this is possibly one of the unknowable things in the world. I think probably people’s ideas and attitudes around these things are different from what we can imagine.

Do we know if carving letters into stones would have been something that a king could or would do? I can imagine this would be tedious, dirty work. So it doesn’t surprise me that a king wouldn’t do it.

Also, I wonder what the people involved would have thought about who exactly would be seeing the writing. Isn’t this the reliquary where the words don’t quite fit so a few letters go down to the next line? At first I thought that seemed hinky. But if you weren’t used to beautiful typography, would you really care? It does the job.

Isn’t this the reliquary where the words don’t quite fit so a few letters go down to the next line?

Yup, this is the writing on the actual stone jar, which was placed inside a stone casket which was entombed inside the stupa. This time capsule of sorts was never meant to be seen by the public eye…
I think of it as the ultimate safety deposit box of that time. Sure, the CEO had the craftsmen construct a wonderful building, install a safe, etc… But the actual envelope containing the original papers? I think he would have written the note on that in his own hand… “These are the bones of our Lord, the Buddha”.

Now, if they were to excavate the Cremation stupa and find another stone vase with the same handwriting, that would be quite the shocker!

I guess my point is that this isn’t simply writing on paper. This is engraving. And personal handwriting wouldn’t have much to do with it. Was that even a thing then? I guess I just caution on thinking of it in modern terms. Everyone then had their own roles, I would imagine. Plus, have you ever tried to write something in stone? You aren’t going to come up with anything that resembles your normal hand writing.

Deepak Anand, a Nalanda based researcher is meticulously researching Piprahwa and other buddhist sites. You can read his blog here. 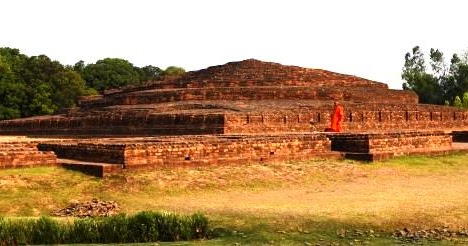 Piprāhwā Buddha Relics: Restoring from the Museum to the Place of its Origin

In 18 th and 19 th century CE, there was a trend in the Indian subcontinent of cursory digging at ancient mounds in the hope of finding ...

The main issue here is whether Piprahwa (in India) or Tilaurakot (in Nepal) is the actual hometown (Kapilavastu) of the Buddha. cf. Kapilavastu (ancient city) - Wikipedia

I visited the two places.

I think it is better to consider the two places are all belonging to the area of Kapilavastu, hometown of the Buddha.

But this view needs to be officially supported by the people of India and Nepal.

Pics I took of the K. M. Srivastava’s findings at the National Museum in Delhi back in 2009 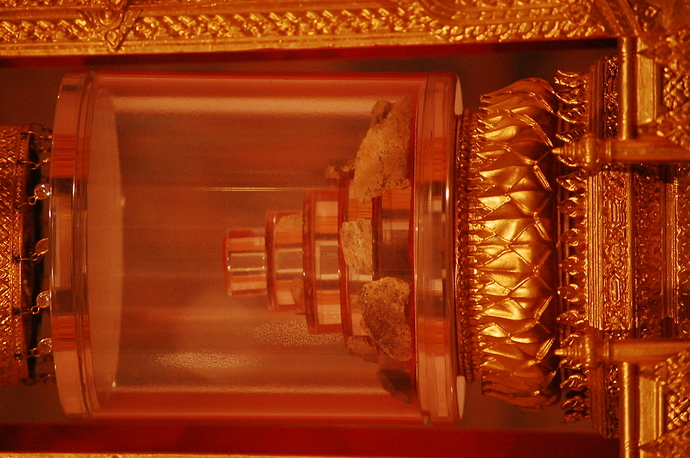 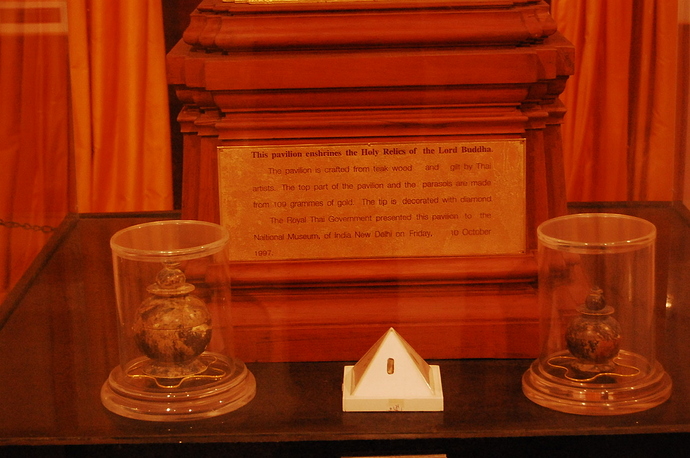 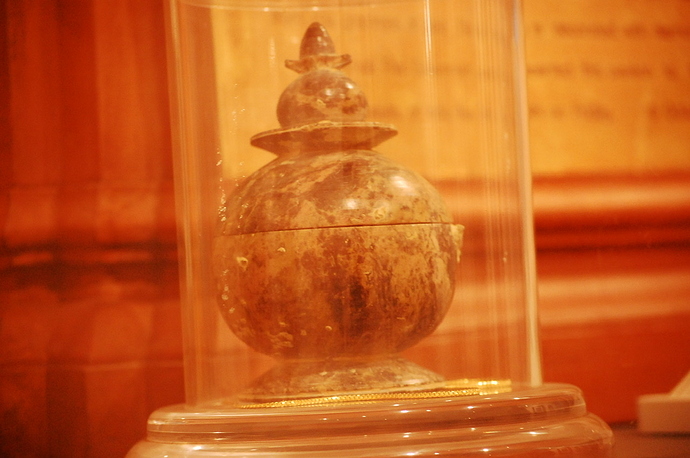 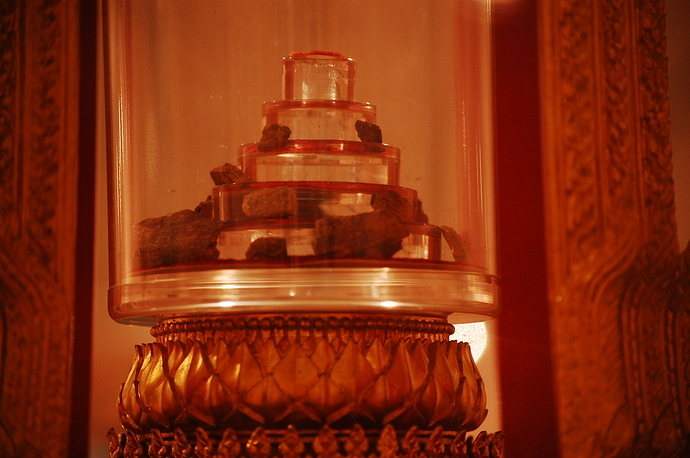