Bring the happiness that most people only dream about: tell us our mistakes

Bhante, should this be ‘and’, to be consistent with all the other ands within SN 16.7 perhaps?

Thanks, Tom! I don’t see often in the flesh these days, so it’s good to see you here! I hope you and Di are well. Thanks for the feedback. Please keep it up!

In the same essay, I don’t believe this is what you intended: 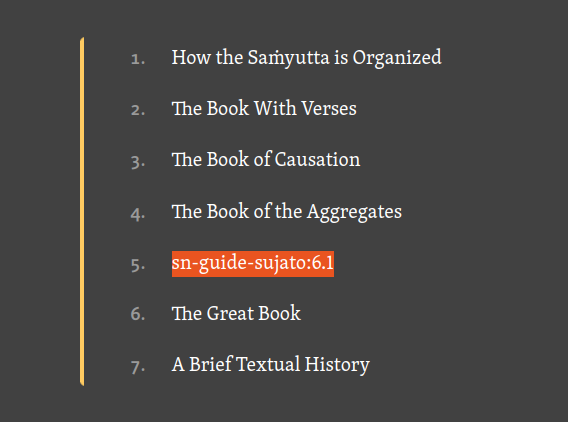 And in Bilara the extra item in the ToC is still not there for translation.

Most of the awakening factors refer to the emotional aspects of spiritual path, the joy and peace of meditation.

Should it be " the emotional aspects of the spiritual path"?

In several Suttas there is a person named Upavāṇa (with underdot). In SN 46.8 we encounter the name Upavāna (without underdot). Is this a different person, or just a spelling variant?

The eightfold path does not rise apart from a Realized One.

It’s the Samyutta on the 7 awakening factors, not the eightfold path. The same for SN 46.10.

Nothing is as effective as getting rid of fetters as the awakening factors.

Probably “for getting rid of fetters”.

There are several Suttas that follow this pattern. In Pali, sometimes aṭṭhaṅgiko is included in the second part of the phrase, sometimes not. The English translation never has it, but always has “has missed out on the noble path to the complete ending of suffering”.

There is no ayoniso in the Pali, so probably no “improperly” required. The same further down with yoniso and “properly”.

Aparihāna is mostly translated as “non-decline”, but in SN 46.36 (and elsewhere?) it’s “progress”.

It’s a noble disciple, not a mendicant who pays heed.

Nice solution for kacchaka! I think I’ve been standing under such a tree in Sydney! It might even have been exactly this one.

In the Suttacentral Editions version of Linked Discourses the introduction has wrong books listed under last three noble truths when highlighting the schematic structure of SN (page xxvi):

Pāda literally means “foot”, and since iddhipāda is defined as the “path or practice to gaining iddhi” (SN 51.27), it’s tempting to maintain the metaphor by speaking of the “four footsteps to psychic power”.

(From SuttaCentral, line 400 in Bilara.)

Why don’t you do it? Instead, you are translating it as “four bases of psychic power”.

A foot is also a base. And “footsteps of psychic power” is nonsensical. Just my $.02.

“footsteps of psychic power” is nonsensical

Why don’t you do it?

Because everyone else has “base”, and I’m a coward. Checking Cone, for the word pāda in the sense “base”, she only cites examples of iddhipāda, quoting the commentary. It’s a bit of a red flag!

Even more than “footsteps”, the most obvious sense would be “feet”: it’s the main meaning of pāda, and the thing that most creatures have four of.

But none of these sound especially good in English. Maybe “four steps to psychic power”?

Is “Four paths to psychic power” not acceptable, bhante? I suppose it may be to avoid confusion with ‘magga.’

I think steps works as well. I actually find that much clearer than ‘bases’ if it’s of any help.