I know that the more frequent debates on the Buddha’s chronology/dates have to with long/short chronologies etc.

But there is also this effort - call it fringe if you like - to push for much earlier dates of the Buddha. Various kinds of sources are produced to support such claims, some from inscriptions, some merely of the oral variety (“In the Mahavamsa it is written…” etc).

[I will attach a few images from presentations which make such claims.]

The Burmese inscriptional evidence is taken from the volume
" Inscriptions of Pagan, Pinya and Ava," and the Saka era dates are manipulated by the presenter.

Jens-uwe Hartmann’s essay “Research on the Date of the Buddha: South Asian Studies Published in Western Languages” in Bechert’s “The Dating of the Historical Buddha,” contains a brief mention about these non-mainstream dating efforts (p. 39 onward).

Have people heard about these seemingly fantastical claims of the Buddha’s parinibbana in the second millennium BCE? Are there any writeups that take on these issues, esp. the “traditional Theravada” beliefs in Burma and Sri Lanka? Any explanations of traditional chronologies followed in Burma and Sri Lanka, esp. incorporating the use of the Saka era?

Of course such a group of enthusiasts also seize upon the dates proposed by Coningham et al about the find at Lumbini, discussed on this site here.

One could of course just dismiss such narratives as originating from hacks and hobbyists…but I thought maybe I’ll try to find just a little more on this issue. Any pointers/suggestions/advice will be greatly appreciated! 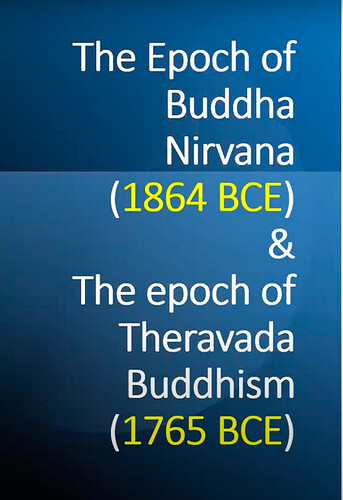