We have just changed the language code that we use for our classical Chinese texts on SC. Formerly all our Chinese texts were simply “zh”, however this does not let us distinguish clearly between the ancient translations and modern translations of the Pali canon, which has been recently added to SC. The internals of SC rely heavily on these language codes in processing texts.

Fortunately, the ISO standard includes a code for “Literary Chinese” (lzh), which includes the ancient Buddhist texts. So we have now assigned the code /lzh/ to all such texts, which you will see in the relevant URLs, eg http://suttacentral.net/lzh/ea6.1

Sorry to wake such an old thread…

Should [LZH] tool tip read Classical Chinese? Or Literary Chinese? For people familar with the whole setup of SuttaCentral this doesn’t matter, but for someone new, this might help. 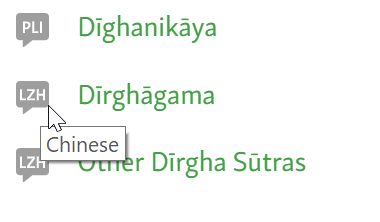 changed 1 files with 2 additions and 2 deletions.

Github is working today, so that’s a plus!

Incidentally, when changing Tibetan to xct one of our reasons was that we heard rumors that the Pali canon was being translated to modern Tibetan. But, sad to say, no updates on that, so I don’t know if it will ever happen.