Could someone with a copy of Norman's Elders Verses help me out?

I’m stuck between grammar and good sense in one verse. It’s found in SN 8.1 and Thag 21.2#2, which is PTS verse number 1210. If someone has a copy of Norman’s Elders Verses I, would you mind sharing with me the translation and any notes he has? I’m specifically interested in the last word of the verse, apalāyinaṁ.

I dont’ see any notes on this verse.

Thanks. You’re sure there are no notes? They should be at the end; normally he comments extensively on every verse, especially when, as here, the readings are difficult. 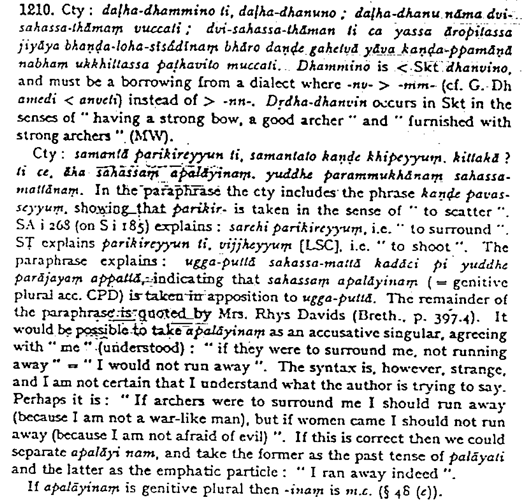 I was just doublechecking when your response came in. Curious what edition you have Gabriel. I have the paperback copy (PTS revised editon elders’ verses I) and the only ‘notes’ are in the introduction where he mentions certain verses as examples of the topics he’s discussing and there’s nothing on this verse. No footnotes and at the end there’s only an index of names (or am I blind again?)

@Gabriel
Yeah, I know, strange. His Sutta Nipata translation (paperback I have), for example, has a ton of notes. Do you have the hardcover copy of the Theragatha? Maybe in the paperback version(1997) they decided to leave out the notes? Or else I’m losing my mind… Well I’m glad you found the note for Bhante Sujato.

In a German translation by Christine Schoenwerth 1997 (not as scholarly, but still) she comments to this verse:

I translate as: "Several interpretations are possible, e.g. in the following sense: “Even if a thousand noisy warriors surrounded me, couldn’t I get more confused, distracted, misdirected from the path”; or else: “Oh, if just a thousand warriors protected me from the assault of sensual impressions!”

It’s a digital copy, so I don’t know if a soft- or hardcover was used, sorry.

Thanks so much Gabriel & Linda!

I have the paperback copy

Oh, they must have released a version for general readers, lacking Norman’s notes, which are highly technical. I usually leave them to the experts!

Thanks for the extra info; not sure exactly how she gets these renderings, but it is a hard verse, so …

Even Norman has three possible renderings, and I see now that in my original translation of the Theragatha I relied on the reading as an accusative singular, “I would not run away”. This sense is mentioned by Ven Bodhi, but he, like Norman and CAF Rhys Davids, prefer to follow the commentary in taking it as an abbreviated genitive plural qualifying the archers.

Problem is, I don’t really know what the verse is trying to say. CAF Rhys Davids is perhaps the most persuasive in her rendering here, capturing a sense of fragmentation around the verse break:

Were high-born warriors, mighty archers, trained
In champion bow-craft, such as never flee,
A thousand, shooting arrows round about —
But women! … well, far more than these may come,
Yet shall they never wreck my peace of mind.
Firmly established in the Norm I stand.

But it is rare, although not unique, to find verses that do not express a complete idea. It seems to me that the sense of the two verses reads more easily if we take it as two parallel if/then statements: “If 1000 soldiers come, I would (or would not) flee; but if even more women came, I would not be scared.”

None of the options seems very compelling, and I suspect there is something missing or corrupt. Perhaps @llt can help; there are a couple of Chinese parallels, but I couldn’t work out if they were relevant.

On reflection, I stand by the rendering I used for the Theragatha, which is the second of Norman’s options; it seems to me to make the least bad sense.

Even if a thousand mighty princes and great archers,
well trained, with strong bows,
were to completely surround me;
I would never flee.

And even if women come,
many more than that,
they won’t scare me,
for I stand firm in the teaching.

But even a single verse
of convoluted Pali syntax
and unclear metaphorical force
has me shaking in my boots.

Sorry, I added the last bit!

Just to add KENeumann’s reading (without further commentary unfortunately) - and odd as well:

something like…
1210 The heroic followers, highly famous, experienced, brave, virtuous,
I long for them, to my feet, thousandfold

1211 And even if there are more than these of women approaching me:
None will spoon-feed me, in truth I stand, unperturbed

And finishing the German renderings with Geiger, 1930

Let mighty warriors, splendid archers, experienced, with strong bows surround me from all sides, a thousand of them who never flee,
And even if women, even more than those, approach:
They can do me no harm; I am firmly grounded in the teaching.

Maybe, although there are no variant readings listed so far. The manuscripts we have are very similar, and only rarely do variants significantly affect the translation.

Geiger’s is clearly the most linguistically justified, and he, like Norman and Bodhi, takes the apalayinam to refer to the archers. While it seems ridiculous to go against the unanimous opinion of the most respected Pali scholars, really all this means is that in an uncertain context they have all followed the commentary. Still, I will bear this in mind, so thank you for all the info.