The Dhammadharini community has been studying the Dhammapada as a tool for learning Pali as well as a source of Dhamma. This exercise has led to many vibrant conversations. As we go back through our work, attempting to clean it up further, we would like to share it here for comment and further discussion.

I will be able to post some in the next week or so and then we will have a community retreat for six weeks, so the posts would likely resume in late May.

Here is the link to the first gatha,

Dear Sister @Niyyanika,
Lovely, thank you so much for posting. Perhaps subsequent ones could be posted in this same discussion for eay following.

The Dhammapada work has been an uplifting practice that has given us much to consider in the Dhamma while we worked to learn Pali grammar and vocabulary.

I’m not sure a thread with over 400 posts seems manageable. I suppose I could do it by Vagga. However, I’m not sure if the resource link from Sutta Central points back to individual posts or to threads. I guess this is a technical question I should pose in a technical thread.

Hi Ayya, yes if we could avoid very long posts (even greater than 100 posts) whenever possible that would be wonderful!

I’m not quite sure what you’re referring to here, would you mind elaborating?

I’m not very technically literate so also do not know the answers to these questions. And of course, do it whichever way you think is best. I just noticed that you had posted the 1st & 2nd gathas in separate discussions and thought they might be easeir to miss for people browsing the site. Often discussions get buried on the site below ones with recent or ongoing activity (not sure exactly how all this works but I know I often miss discussions when they don’t show up on the main SC page I open).

For anyone who didn’t see the discussion about the 2nd gatha, it is here.

But of course, if there end up being several comments on a gatha, then it could get unwieldy to post many in the same discussion. As you say, you could try it by Vagga if you think that might work. I don’t know if that would get too long or not. I suppose it would depend on how many comments people made.

The Dhammapada work has been an uplifting practice that has given us much to consider in the Dhamma while we worked to learn Pali grammar and vocabulary.

I can very much relate to this. I am also studying Pali and it’s a wonderful way to go more deeply into the suttas and verses.

With much mettā,
Linda

I’m not quite sure what you’re referring to here, would you mind elaborating?

In playing with SuttaCentral links it looks like a sutta will list the discussions that mention it (ex: AN_ 4.94 if properly formatted, which I am trying to avoid so this doesn’t become a link, would link to the post within a thread where it is mentioned.) This is good as a thread may cite more than one sutta.

Now for Dhammapada, I am guessing I don’t have the format right. I am also guessing it is the last bit of the url that is key so will experiment here by stating that this thread is about dhp#1 and see if SuttaCentral points here. However, since it looks like the whole Dhammapada is in one html file, linking to these Glossed discussions may not be so useful and I’d rather not overwhelm the ref list there for something that might only interest a few folk studying Pali. Hmmmm… what to do?

EDIT: Nope dhp#1 isn’t it. I’ll try Dhp , but expect it will just point to the top of the Dhammapada.
EDIT: Still nope. hmmm… I’d take a hint

or I can fiddle with it with more experiments later.

Sadhu Ayya,
Not sure if this is what you are after but if you want a link to the Yamakavagga, you have to add #yamakavagga to the right of “dhp” in the url:

And if you want a link to the first verse, you have to add #1 to the right of “dhp” in the url:

This seemse to be equivalent to what Dhp1 points to.

Dear Sister @Niyyanika, thanks so much for this resource! Would you maybe consider for your future postings a complete pdf version of your dhammapada study? I know this takes a lot of time, and personally I’d be most interested in the grammar-part of your work. Thanks!

Maybe having one index post which holds all links to the relevant posts is an easy solution?

Not sure if this is what you are after

I think maybe what is being referenced here is the feature on the main Sutta Central site that links to any discussions had about the sutta on the Discourse pages: 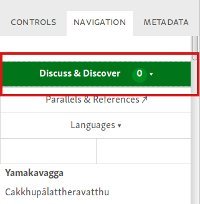 As an aside, I did just do a test with this post and the sutta it references and nothing seems to show under Discuss & Discover so I wonder if something got a little broken, or if I’ve just missed how discussions and suttas are linked up.

As for the mail point, though, while I share in reservations expressed elsewhere in these pages about the usefulness of tags in many cases, here it might be a useful way to bind the collection together without things getting too bloated, as exemplified by Bhante Sujato’s ebt series.

I think what might solve the sharing problem easily, is on the google drive for that account which the google doc comes from, make that whole directory where the dhp verse files are stored a public, shareable directory. That makes all the files in there shareable, and you would only have to give us the link to that directory and we’d have access to all the new dhp verse entries as you added them.

Yes, it does (file > download as > pdf), I would have mentioned it myself but I got the impression the request was for the whole series as a single document.

As for the shared folder/drive point, seems like a good idea, but I’m not sure it necessarily solves the issue if the purpose is to open space for comment and discussion (as suggested by Ayya’s original post) on each gatha (ie. 423 different discussion threads).

Yes, it does (file > download as > pdf), I would have mentioned it myself but I got the impression the request was for the whole series as a single document.

on a windows pc, I use PDFsam basic, and I think it has an option to merge all the pdf’s you select from the source file opener into one big merged pdf file. So if there were a google drive directory for the dhp files, and their filenames were all zero padded so that they sort alphabetically, like Ayya is doing already I think, then it should be merged together in proper order as one file.

The trick with getting a free PDF authoring program such as PDFsam basic, be real careful where you download from, it’s real easy to get viruses.

I think what might solve the sharing problem easily, is on the google drive for that account which the google doc comes from, make that whole directory where the dhp verse files are stored a public, shareable directory. That makes all the files in there shareable, and you would only have to give us the link to that directory and we’d have access to all the new dhp verse entries as you added them.

We do have them in a shared directory, but I think we would like to go through this second pass of cleaning each one up a bit before it becomes open for world wide comment. Thus the thought of releasing them one at a time.

It is easy to turn each page into a PDF, except I notice that the Breve mark in the meter section doesn’t come across correctly. Are people seeing a breve, a little smile shaped mark, and a line in the meter section, or are you seeing a large box shape when you view the Google doc?

We feel that we are legal with copyright when releasing single pages that only have a few lines quoted and cited from non-freely available sources , but wish to write to three source for permission to use their material or need to remove it before bundling the collection into a single release.

I wondered about making the comment feature available publicly in Google docs, but don’t really know how overwhelming that might be, so thought it better to have comments appear in a D&D thread where they would be more searchable and easier to process as a conversation.

Your thoughts are welcome on how to best share this as a resource and grounds for conversation.

P.S. In the community I am in, generally novices are addressed as Sister. Ayya is generally reserved for Bhikkhunis who are past their period of dependence. I understand this varies from community to community, but I feel a little like a fake when addressed as Ayya and also want to take care that I don’t seem over inflated. I’ve got SOOOOOO much to learn before I grow into any of the forms of address for Bhikkhunis, which will probably remain true even after Bhikkhuni ordination and gaining independence, but I guess that is part of the work of seeing my conceits.

Much thanks Sister Niyyanika, and many apologies for my err.

For my two pennies worth, while the Google Docs comment facility can be very useful in many places, I’ve found that it can become quite cluttered quite quickly. Saying that its one possible advantage is that one is able to anchor comments precisely to the part of the document being handled.

My own view is that Discourses is a very ‘aesthetically hospitable’, logically flowing environment for discussion and would probably be the preferable option for anything beyond fairly concise notes.

Maybe the the best way is dependent on the nature of comment you hoped for.