Did naked ascetics spank each others’ bottoms?

Today in “things you probably neither needed nor wanted to know about the Pali canon”, we address a riveting question on the pressing issue of bottoms, and their relative spankededness (spankitude?) or lack thereof in communities of naked spiritual seekers in ancient India.

In SN 41.9, Citta the householder asks his old friend Kassapa (not that Kassapa) whether he had attained any of the good stuff, spiritually speaking, from his thirty years in robes. Or out of robes, to be precise, since he was a naked ascetic.

With refreshing honesty, he said “no”, and that the only things he’d attained are “nakedness, baldness, and pāvaḷanipphoṭanā”.

This last term is unique in the Pali canon, and its elements are also difficult. Ven Bodhi translates following the commentary as “the brush for cleaning my seat”. Which is kind of odd, but understandable since certain kinds of ascetics did, and do, use a brush for sweeping insects away. Still, it’s far from a normal term, and we have no real justification that pāvaḷa means “seat”: why not use one of the normal words for seat? And why is the brush used only for seats? Normally such brushes are used for walking.

The PTS dictionary says that pāvaḷa means “hair” and that the phrase refers to the practice of pulling out hair. Again, there seems no justification for this. He’s already said “baldness”, and phoṭana should mean something like “hit, strike”, not “pull”.

The Chinese parallel at SA 573 is unhelpful, since it appears to avoid the difficult phrase:

唯有躶形、拔髮、乞食，人間遊行，臥於土中
only nakedness, baldness, begging for food, wandering among people, and lying on the ground.

Fortunately, pāvaḷa does appear one other time in the canon, in the memorable sentence at DN 24:

This too is a situation where a naked ascetic is involved in a somewhat humiliating situation, so the meaning must surely be the same. However it is overlooked in all the discussions of SN 41.9 that I’ve seen.

Since photeti is related to phusati, to strike or hit, one reading is that among the humiliations Kassapa had suffered was a spanked bum. Is this something that the naked ascetics did to each other? Is it a special kind of mortification practice? Or perhaps the other thing, if you know what I mean. Or is it just an idiom, “all I got was punished and humiliated”? Alas, we may never know!

There is a somewhat less salacious possibility, though. Given the realities of sitting on the rough ground in ancient India, it was probably not a very comfortable thing to do while naked. In fact, there must have been a constant irritation of stones and lumps poking your butt. I’m thinking this is the most likely reading. It also squares up with the context in DN 24, since both contexts riff on the problems of naked ascetics with their raw bum contact whenever they sit down. So we should probably translate as something like:

“I have no such achievement, householder, only nakedness, baldness, and a sore bum.”

Kassapa sounds as if he were having a mid-life crisis. It’s okay, time heals all wounds.

As a more practical tip, if you ever decide to become a naked ascetic, go for dog ascetics. At least your bum will be more comfortable.

The PTS dictionary says that pāvaḷa means “hair” and that the phrase refers to the practice of pulling out hair. Again, there seems no justification for this.

This a practice still followed by Jain monks, they call it kesh lochan:

In fact, there must have been a constant irritation of stones and lumps poking your butt. I’m thinking this is the most likely reading.

Makes sense. Maybe this is the reason why sometimes Jain saints’ practice of meditation is usually depicted in a quasi squatting posture, including the one depicting Mahavira’s attainment of their so-called omniscience (kevala-ñana).

It seems the posture is nowadays called cow-milking posture (godohikāsana). 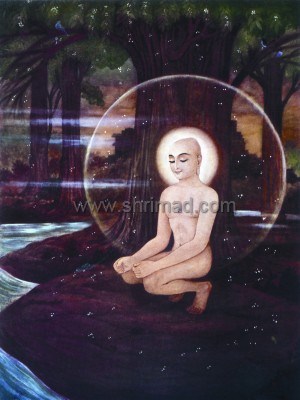 Oh, very interesting, I didn’t know this. It all starts to make sense. I mean, sitting naked on the bare ground, there’s all kinds of insects and it gets worse the more you think about it.

If it was the case that the naked ascetics used a specific posture to avoid this, then the problem must have been a recognized cultural idea, a meme if you will. And, humans being what they are, they just couldn’t stop themselves sniggering, because bottoms! The other text with pāvaḷa—DN 24—is the broadest slapstick in the canon. I guess bums have always been hilarious.

@sujato @Gabriel_L As far as I know the squatting position is not regarded in the Jain tradition as a way to protect your bum but rather as an ascetic practice. To prove it, just squat and stay like that for more than ten minutes. I guarantee you, after half an hour you will be more than happy to have stones of any size and sharpness poke your butt.

Mahavira is reported to have attained the Absolute Knowledge in the squatting position after staying in it for hours if not days, and knowing the Jain rigourism it is hard to assume they put the greatest ascetic hero in a bum-protecting posture.

I think we could turn to Mahavira’s biography to seek for a more plausible answer. Compared to the Buddha, Mahavira was definitely much much more hardcore in his samana lifestyle, and one of his uncomromising ascetic practices was forsaking the clothing. This practice constantly got him into trouble on his pre-Enlightenment journeys. Reading the Pali Canon, we sometimes get impression people were deeply respectful for samanas and thought it to be the highest honour if the Buddha or members of his Sangha accepted their alms. Well, it was not exactly the case. The Canon mentions on numerous occasions that it was nothing unusual for a monk to hear ‘You bald one’ (or maybe even something more disrespectful) on his alms round just as they can in many non-Buddhist countries today - I know stories about Russian monks getting beaten on the street. The legendary death of Ven. Mahamoggallana strongly suggests that even killing monks was at least not unheard of. If even a pretty moderate and socially conformist Buddhist Sangha faced difficulties trying to get recognition, imagine what life could be like for a naked Jain ascetic who never washed. According to one of the legends, prior to his Enlightenment, Mahavira was frequently severely beaten and attacked by dogs. Some especially ignorant and malicious villagers even tried to hang him on a tree full KKK style, but the rope kept snapping until they realized they’d better set this weird smelly hobo free, or else the gods will be very upset. So pāvaḷanipphoṭanā can be just that - kicked arse.

Upd.: After a little bit of thinking, I think my version is very plausible as it accounts for why later generations experienced difficulties in translating it. Imagine the entire Western civilization has perished and the only literary source of knowledge about it is a large corpus of Christian theological texts. Now, imagine that by any chance an idiom ‘to kick someone’s arse’ would slip in into one of the texts (just bear with me on that one, okay?), as in ‘Christ totally kicked Satan’s arse by descending into the Hell after the crucifixion’ or ‘The only thing Satan got after thousands of years of fighting against God was his arse kicked.’ I don’t really think translating these sentences into Neo-Mandarin with only a corpus of theological texts at hand would be a trivial task.

I read DN 24 for the first time; thanks, Bhante. Perhaps the most curious Sutta I’ve read; almost Pythonesque at times, especially imagining Bandylegs as one of Terry Gilliam’s animated characters.

Best part of this Sutta: the use of the Spanish word “siesta” in the translation. A siesta is, well, a siesta…the word seems almost universal for the midday post meal snooze, and I’ve never heard of another word in any language that captures so well this break in the day.

‘The brush for cleaning my seat’ could also be this one (‘seat’ being a polite term for one’s foramen profundis).

This was used in ancient times by many dofferent civilisations including the Greeks and Romans. Hindus currently rinse themselves off with running water and do not use papaer, but use a special scraper. I refrain form further elaboration and will leave the remainder for others to consider.

However, and I am truly sorry to disappoint, the “bottom-scraping stick” is a well known item in the Pali Vinaya, called the ava­lekha­na­kaṭṭha. The Vinaya includes extremely elaborate guidelines for cleanliness and decorum in the toilet. It’s so delightful that one monk claimed it gave him goosebumps just to read it.

I just checked it up to see what the term was, and I discovered that this passage is one of those deemed too nasty to be translated in full. It says:

One should not relieve oneself while groaning … you should not drop a piece of wood for scraping into a cesspool.

What a titillating ellipsis! What secrets lie within, heretofor unknown to the English-speaking world! I can only hope my friend @Brahmali finishes his translation soon so that we can find out.

And I think we have both grown as people through this learning process.

Yes, nothing like a bit of “Getting back down to Basics” to broaden the mind.
It’s the perspective that counts… :anjal: