In a number of suttas, mainly in the Majjhima, we encounter a kind of physician called a sallakatta. This is usually combined with bhisakka, “healer, doctor”. In MN 63, MN 101, and MN 105 this doctor is called upon to extract an arrow (salla). This term has been previously discussed by Jayarava, but only in the context of MN 63.

Elsewhere in the EBTs (with one exception, see below) the term is used either in a list of various medical specialists (DN 2, etc.) or as a spiritual epithet. In neither case can we infer anything about the kind of specialty they practice.

It would seem likely that it is no coincidence that the specialist’s descriptor refers to an arrow or dart. However, in Pali translations it has typically been translated as “surgeon”. This seems insufficiently specialized. I am not sure, but it seems this reading implies the compound is resolved “applier of the blade”, reading katta from kar, “to do”. However, the Sanskrit term is śalyakarttṛ, or perhaps śalyahartṛ, which seems better attested. But both these terms have a similar sense, to “cut”, not “do”. This agrees with the commentarial gloss, sallakantana. Monier Williams gives the sense “‘cutter or remover of splinters’, a surgeon” for śalyakarttṛ. This isn’t entirely satisfactory, however, as a surgeon generally is not a specialist in removing darts. 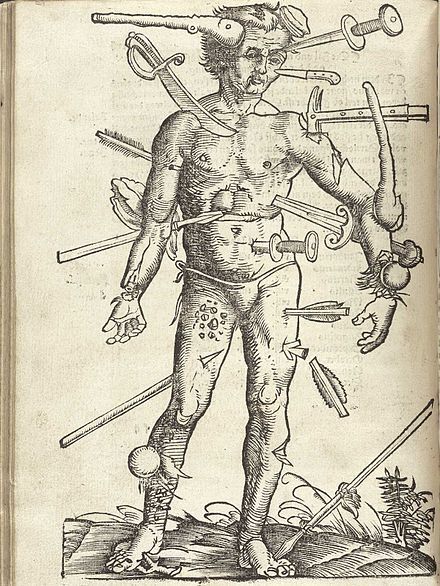 The basic sense would therefore seem to be an “arrow extracting doctor”. It seems like an odd medical specialty, but there we are. Perhaps it began as a military doctor, a field surgeon for treating battlefield wounds. This is supported by the commentarial gloss, which says the man was struck by an opposing army (parasenāya ṭhitena viddho bhaveyya). So maybe we should, in fact, translate as “field surgeon”. Presumably such doctors would ply their trade in times of peace as well.

This is complicated, however, because in the Milinda the bhisakka sallakatta is applied in a variety of settings, including “easing a disease with medicine” (Mil 3.1.3), treating someone with “multiple afflictions” (Mil 6.1.5), and so on. Clearly the sense “arrow extractor” is inadequate here.

Given that the early use is mostly consistent, and the later use is much broader, perhaps what we are witnessing is an unwarranted generalization based on the early sutta passages. These similes, of the man struck by an arrow, were very famous, and perhaps they simply entered the Pali lexicon from there.

So I would suggest that sallakatta means a physician who specialized in battlefield wounds, especially for treating soldiers struck by arrows. As such specialists moved among the general populace, the term became applied more generally, a process probably facilitated in the Pali (and later Buddhist literature) by the somewhat automatic echoing of the well-known early idioms from the Majjhima. I would therefore suggest translating either as “arrow extracting doctor” if literalness is desired, or “field surgeon” for more idiomatic general use.

Very interesting essay, thanks! The gentleman in the illustration seems to be having a rough day. https://youtu.be/Q96viEVSUBk

Just out of interest spurred by your essay I found reference to Medieval terms for the various practitioners of medical arts:

Barber: Bloodletting, some surgery, dentistry, and often potions. Plus hair and beard trimming.

Perhaps it had been the case that the Indian Iron Age surgeon responsible for removing arrows had this battlefield specialty.

Perhaps the thing that identifies both the remover of arrows and the treater of lepers is that in the Buddha’s time both procedures would have required cauterization:

Cauterization (or cauterisation, or cautery) is a medical practice or technique of burning a part of a body to remove or close off a part of it. It destroys some tissue in an attempt to mitigate bleeding and damage, remove an undesired growth, or minimize other potential medical harm, such as infections when antibiotics are unavailable. The practice was once widespread for treatment of wounds. Its utility before the advent of antibiotics was said to be effective at more than one level: Cautery ...

It could be that “applier of the blade” is the correct derivation, but the blade being referred to is the heated cautery. It is possible that the user of this blade would have been a kind of specialist with a separate designation, since they would have had to move about with some source of fire, and so sallakatta is synonymous with cauterizer. Perhaps, as you surmise, the term originated in battlefield medicine, which accounts for the etymology, but was then extended into other areas.

Word of the day, thanks! It does indeed seem to be a similar range of dutes, probably our modern sense of surgeon has become more specialized.

in the Buddha’s time both procedures would have required cauterization:

I did think of that, but the passage at MN 75 explicitly refers to cauterization, and it is not connected with the word sallakatta:

“A physician is commonly and apparently interchangeably called bhissaka, tikicchaka, vejjo etc. or sallakatta and it seems that, at least from the point of view of common parlance, no diﬀerence is being made.”

Probably I should refrain from commenting as I have no knowledge of Pali, but out of curiosity I fed the word sallakatta to Google and found the above - don’t know if it is helpful.

Thanks, I noticed this essay but was too lazy to read it! But it does have some useful info. It seems the form śalyahartṛ is better attested in the Sanskrit, although it doesn’t affect the meaning. It seems there are no early uses, so my guess is the Pali is the earliest source.

These similes, of the man struck by an arrow, were very famous, and perhaps they simply entered the Pali lexicon from there.

I feel like it is a bit of a stretch, really. I know of at least three examples of semantic evolution of words denoting medical professions that are somewhat similar to sallakatta.

The English surgeon comes from Norman French surgien < Old French serurgien < Latin chirurgia < Old Greek χειρουργία ‘handwork’. This is the opposite process of semantic specification (‘handworker’ > ‘surgeon’) but weirdly enough it looks somewhat similar to sallakatta to me. At first, this might have been just any hand worker just like sallakatta might have initially be any guy pulling arrows out of your body.

This is in no way a scientific explanation, I just wanted to show that simlar semantic processes can be found in other languages so the similes are a bit of a weird explanation. Still, they may be a correct explanation, to have a better idea one should probably have a look at other Prakrit languages.

Bhisakka is ‘medicine’ and Sallakatta is a surgeon according to the online Pali Canon e-dictionary. This oddly mirrors the basic qualifications of a doctor: MB BS : Bachelor of medicine and Bachelor of surgery. In a previous job as a General Physician part of my role was minor surgery (extracting various foreign bodies that had entered the flesh - one was a cactus spine that I had to dig after-under a local anaesthetic of course). I would vote for less specialisation than more. When resources are scarce doctors have to become generalists as fewer numbers of doctors have to deal with every type of illness presented to them. It is only more recently with more resources and research that specialisms become widespread. However it is possible that some GPs develop ‘special interests’ and become known for particular skill in that local area. I’ve heard of Ayurvedic doctors skilled in eye surgery in Sri Lanka, in the past. My vote is for General Physician but it is difficult to know how they sliced the specialisms (pun intended) back then

I feel like it is a bit of a stretch

Sure, you may be right. It would be interesting to see how the term evolved in the non-Buddhist texts.

I would vote for less specialisation than more

Indeed. There are a surprising number of medical specialities mentioned in the early texts, but it is still far less than we have today, and of course the nature of medicine was very different.

Maybe arrows were just the most commonly used weapon in warfare?

I know for instance in Japanese medieval warfare the katana is often romanticized but the most common weapons were actually spears, bows and arrows. I think this is the case the world over; spears, bows and arrows are some of the earliest weapons in the history of war and remained popular over the more expensive (in time, skill, and resources) weapons like swords. There may not have even been any special treatment for slashes and gashes from edged weapons. In the West, afaik either nothing was done or you would rub some mud on it (great!)… until Paracelsus’s crazy idea of cleaning battle wounds for healing.

Attwood, Jayarava. (2013) Translation Strategies for the Cūḷa-Māluṅkya Sutta and its Chinese Counterparts. Journal of the Oxford Centre for Buddhist Studies, 5, 42-63. Online: http://jocbs.org/index.php/jocbs/article/view/54/86

Thanks for the update.

For some reason this thread came to my attention again, and I had a thought about this. Obviously, this is all just speculative, but it occurred to me that the process of adding words, phrases, and images to language derived from specific textual passages is in fact very common, in English and I presume in other languages. Our most fertile source is probably the Bible, with poets such as Shakespeare, Homer, and Chaucer also major contributers.

There is this paper by Olivelle:
Olivelle, P. (2017). The Medical Profession in Ancient India: Its Social, Religious, and Legal Status. eJournal of Indian Medicine, 9(1), 1-21.

He traces the earliest mentions of medical professions to the Dharma Sutras (overlapping with the latest redactions of the Pali Canon), Āpastamba 1.19.14:

… the term is śalyahartṛ (remover of darts). Caraka (CS Sūtrasthāna 30.28) [around 1st CE] gives a classification of medicine in eight branches, of which the first two are śālākya (surgical treatment of the body above the shoulders) and śalyāpahartṛka (surgery to remove foreign objects from the body)