While that is not what I was speaking in reference to…

There is nothing wrong with this teaching: “Liking, disliking, liking-disliking - these three are provocative, degrading & circumstantial. This is peaceful & ennobling - equanimity”

Although it would obviously help, you don’t actually need saññā-vedayita-nirodha (nirodha-samāpatti) to become an arahant.

Here’s a video by ven Punnaji describing how it’s done, without formless attainments 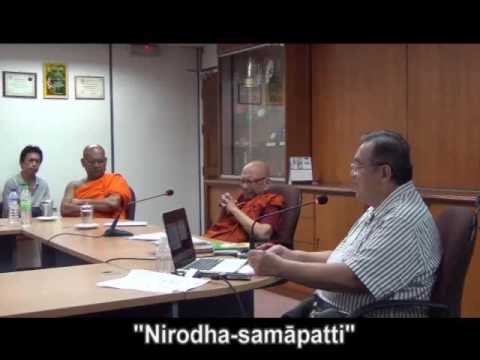 There are a number of suttas (MN 64, MN 52, etc) that show that arahantship can be achieved based even on the first jhāna. Yeah?

arahantship can be achieved based even on the first jhāna. Yeah?

Sure. But, I was under the impression that nirodha was a synonym for nibbāna, no? A few suttas (like SN 36.19, which lists “nirodha” as the highest happiness) seem to strongly imply this.

cessation of perception and feelings are only after the formless attainments

Indeed it can be achieved in that order, but if it were simply another stage of arupa, then we’d just have five arupas, right? But nirodha is not one of the 4 arupas. Nibbāna (“nirodha” when listed as a meditation attainment) is listed above the arupas simply because it’s higher/more refined.

Is cessation of perception and feeling nibbana? Q & A

As discussed in this thread, they are not the same thing.

My understanding of Cessation of perception and feeling (CPF) is that they are only possible to be attained after one has attainment of neither perception nor non perception.

I was under the impression that nirodha was a synonym for nibbāna, no?

The precise meaning of nirodha depends on context. Saññāvedayitanirodha is one specific context, which refers to the ninth attainment of samatha beyond neither-perception-and-nonperception, the temporary ending of everything. But you are quite right, of course, the nirodha is also used in the context of nibbāna. In such contexts it refers to the cessation of craving.

Lay life is at odds with the spirirtual life.

From the insight perspective conventional reality is the expression of samsara, based on cycles, driven by passions, and practice is going against that current:

From the view of the Brahma viharas, including equanimity, conventional reality is seen in its beneficient aspect in the balance of nature and tranquillity meditation starts from that point “at the foot of a tree”. That is a form of equanimity without jhana which permeates the cosmos. Insight and the Brahma viharas can be combined in a practice, and without insight the path is static. The seven factors of awakening include both active and passive groups of three (fire & water), and equanimity is a passive factor (SN 46.53).

In my view and experience, it is not that lay-life is at odds with the spiritual life. Rather, it is that as a lay practitioner who wishes to practice seriously, one must be skilfully discerning and strongly protective of all life aspects. Where we live, who we associate with and which activities we choose to engage in.
Serious lay practice requires much dedication, resolution and considerable strength.
Just as in monastic life, one must also personally cultivate the conditions which truly support individual practice. External supporting conditions within a monastery do not guarantee dedicated personal practice.
And contrary to wide belief, it is very possible to create ample opportunities for seclusion in lay practice.

This is fine with me. What I didn’t agree upon was the opinion that lay life is at odds with spiritual life. Sitting under a tree doesn’t mean one physically have to place one’s form under a physical tree. And personally, I don’t like to use the word equanimity, I prefer peacefulness or serenity. And of course, it’s not enough to be peaceful, one has to abide in peacefulness and let the natural course do what it knows.

And contrary to wide belief, it is very possible to create ample opportunities for seclusion in lay practice.

Right. Stillness permeats the world; it is made of stillness.

If the spiritual life wasn’t at odds with the lay life, then why does the Buddha tell you to abandon memories of lay life?

In the same way, a mendicant who is committed to the higher mind has coarse corruptions: bad bodily, verbal, and mental conduct. A sincere, capable mendicant gives these up, gets rid of, eliminates, and obliterates them.

When they’ve been given up and eliminated, there are middling corruptions: sensual, malicious, or cruel thoughts. A sincere, capable mendicant gives these up, gets rid of, eliminates, and obliterates them.

When they’ve been given up and eliminated, there are fine corruptions: thoughts of family, country, and being looked up to. A sincere, capable mendicant gives these up, gets rid of, eliminates, and obliterates them.

When they’ve been given up and eliminated, only thoughts about the teaching are left. That immersion is not peaceful or sublime or tranquil or unified, but is held in place by forceful suppression.

I understand it as Lord Buddha here talks about the view of self and concepts, like clinging to rites and rituals, as part of the first three fetters, and hindrance to stream-entry. And not contradicting anything written by me.

In one sutra (forget the name) – there was a monk who got sick and was worried that he could not attain Jhanas. Then the Buddha reminded him that attaining Jhana is not the final destination of Buddhism: the final aim is wisdom and subsequent liberation (e.g. by experientially seeing the three characteristics of existence through vipassana, etc).

Jhana (Samadhi) is needed only because it enables us to see things clearly in the “here and now” moment (i.e., understand things like the three characteristics, etc.). Note that Jhanas was there even before the Buddha’s teachings came about. It seems the three elements (Seela, Samadhi and insight) may develop to different degrees in different individuals, and when one comes to an overall experiential understanding (i.e., not a mere theoretical understanding), liberation happens.

It seems to me that a lot of practitioners cling to a belief that only the deepest absorption will do, - and thinking/doubting about Jhana leaves it becoming a hindrance to developing the wisdom needed for experiencing Jhana.

I remember a while ago Ajahn Amaro in a dhamma talk, saying that debates about Jhana and Vipassana have been going on since the time of the Buddha.

True. Debates happen when people cling to views. The Buddha said not to cling even to the Buddhist teachings (Alagaddupama Sutta: MN22), but to use the teachings to understand the reality of the “here & now.” Jhanas are useful only to calm the mind so that the reality of the here & now can be carefully observed (which can result in clear knowing and liberation). One needs to also avoid clinging to the extremely pleasant nature of peaceful/calm Jhana states.

I remember a while ago Ajahn Amaro in a dhamma talk, saying that debates about Jhana and Vipassana have been going on since the time of the Buddha.

I don’t have a reference, but I do have a quote from Ven @dhammanando about this:

Whether or not five-sense-door experience is present in the jhānas is a matter Buddhists have been debating for over two millennia. If Dhamma Wheel’s 33-page Great Jhāna Debate thread is anything to go by, they’ll probably be debating it for the next two millennia as well. Ajahn Brahm’s view that there’s no five-sense door experience in even the first jhāna was also the view defended by the Theravadins at the Third Council, while Ajahn Thanissaro’s view to the contrary was defended by the Pūrvaśailīyas.
jhana vs silent illumination or other zen methods - Page 3 - Dhamma Wheel Buddhist Forum

On a more positive note:

As the disagreement doesn’t involve any difference of opinion over how the preliminary practice of samatha-bhāvanā is to be carried out, one always has the option of just going ahead with the work while maintaining an agnostic stance on the contested questions about what jhāna is like.
Jhana - Page 3 - Dhamma Wheel Buddhist Forum

The reason debates happen is more naunced than attachment to views, it’s acting based on assumptions. There’s nothing wrong with having a view based on wisdom and direct experience.

If you only spoke (or even thought) about what you actually knew, instead of assuming and speculating, you would not get into conflict with yourself and others.

The founder of skepticism, Pyrrho of Elis, actually learned this from ancient Buddhists on his visit to Ghandahara.

According to the Pyrrhonists, it is one’s opinions about non-evident matters (i.e., dogma) that prevent one from attaining eudaimonia. As with Epicureanism, Pyrrhonism places the attainment of ataraxia (a state of equanimity) as the way to achieve eudaimonia. To bring the mind to ataraxia Pyrrhonism uses epoché (suspension of judgment) regarding all non-evident propositions

So by withholding judgement, you prevent yourself from taking a wrong action and acting on assumptions.

Take for example the act of Suicide, it is based on the assumption that there is no rebirth. If one knew that there is rebirth and their existential emotional pain would persist, would they commit suicide? or would they look for a better solution to dukkha

Sensual desires arise due to ones assumptions on how to solve dukkha, but despite it never solving dukkha, people continue to act on rituals. People continue to churn water thinking one day it will result in butter.

A ritual is something that you believe leads to an outcome, but doesn’t. The Buddha uses the metaphor of someone churning water to make butter, but this will never happen. Hence the importance of the third noble truth. The third noble truth is a confirmation, that removing the cause (craving) does indeed remove the effect (dukkha).

Therefore acting on assumptions is acting on rituals, sensual desires are rituals because they don’t solve dukkha.

So the issue is not necessarily views, but acting on assumptions which is just another word for ignorance.

In the end, speculation and assumptions don’t lead to anything, and the only relevant knowledge, to be confirmed here and now, is that whatever is born must die.

If it’s Impermanent, it’s not worth holding on to.

For whatever the reason

that entrenched perception and conception assail a man

if there is found nothing there to be delighted in, welcomed, or clung to

this is the end of the proclivity to attachment

this is the end of the proclivity to repugnance

this is the end of the proclivity to dogmatism

this is the end of the proclivity to self-centredness

this is the end of the proclivity to uninsightfulness into reality

this is the end of the use of sticks and swords; quarrels, arguments, disputes, strife, and malicious speech and lying.

In this way these unvirtuous, spiritually unwholesome factors cease without remainder