I’m teaching myself the Sinhala script for Pali. I know! Very lazy, I should have done it years ago!

Anyway, i wanted a chart with Sinhala/Roman equivalences, which can be found on wikipedia. That’s fine, but a little dull. So I thought I’d make it look fabulous. Now it’s my desktop wallpaper! 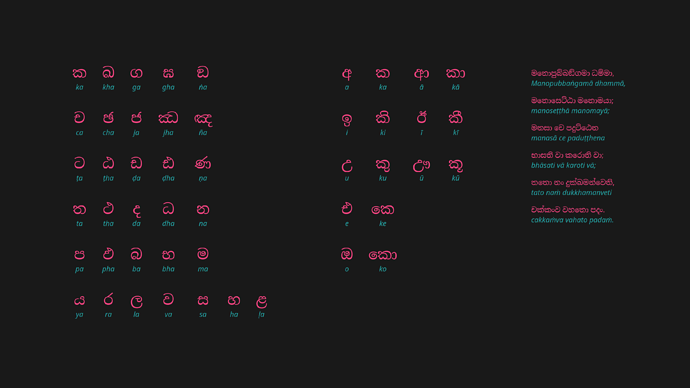 Source file in case you think you can improve on perfection.

Thai-Pali script seems to be much easier!

The system is pretty similar, but the Thai letterforms are probably more differentiated.

I don’t really know much about Indic writing systems, but given how systematic the linguists were, it strikes me as odd that they didn’t make a really systematic script.

I mean, surely the obvious thing to do is define a basic shape for each place of articulation, then modify it for voicing and aspiration. Something like:

Anyway, human culture is full of wonderous weirdness, so it’s probably for the best!

Like the Burmese, the Sinhala are very into circles. I wonder what Latin characters look like to those who don’t read a language that uses them?

I guess the issue is that the Sinhala script brahched from the south indian Kadamba / Kannada script which in turn branched out from the late Brahmi script (aka Gupta) much earlier in the timeline.

Hence has its own shapes inspired by the more abstract and less systematized brahmi script itself.

I really appreciate the systematization or patterns brought by Devanagari, also found in Tibetan, Bengali, etc (i.e. the top line which forces some orientation and allows for a quicker memorization and differentiation between characters imho).

If you want to get really puzzled, try Kharosthi!

The system is pretty similar, but the Thai letterforms are probably more differentiated.

I think it just depends on familiarity. To me the Thai alphabet looks like the letters are all the same. It’s true though, that when first learning it seems like there are only about 5 or 6 different letters.

The letter ka may not be the best example for the vowel symbol. The u is made in a different way for most other letters.

They include some vowels not in Pali, though.

Not sure if it is true, but the story told is that the Sinhala alphabet developed all the curves because straight lines caused the ola leaves to crack.

Not sure if it is true, but the story told is that the Sinhala alphabet developed all the curves because straight lines caused the ola leaves to crack.

Makes sense. And this may be the reason why most of the texts kept in Thailand were written in the also more curvy Lanna script.

Looks like your chart is missing the pure nasal ṁ called the binduwa. It’s the letter you see as the last character in the Dhp verse.

In contemporary Pali written in Sinhala, the binduwa is often substituted for nasals even inside of words. And the real letter for ṅ is almost never used.

In traditional Pali written in Sinhala, the vowel remover symbol is never used and instead the letters touch each other where the vowel is removed. This is how the BJT edition is written, as well as older chanting books, etc. It’s quite interesting because the same symbol (called a hal-kirima, looks like a little flag) is used both as a vowel remover for consonants as well as a vowel lengthener for the letter e and o. Since all the e’s and o’s are long in Pali (with exeptions) that means that the hal-kirima is never used in the traditional Pali system and the untrained reader would think that the o and e were short. Which of course is the same situation in standard Roman transliteration.

For others finding this thread, I wanted to mention this excellent tool for converting scripts. As far as Sinhala, it’s one of the most robust tools I’ve found.
http://aksharamukha.appspot.com/#/converter

And this may be the reason why most of the texts kept in Thailand were written in the also more curvy Lanna script.

Oh that’s so interesting. As I was writing that the question arose in my mind how the Thai alphabet could have been written on palm leaves.

Makes sense. And this may be the reason why most of the texts kept in Thailand were written in the also more curvy Lanna script.

But the Thais also used Âksâr khâm a lot, which is replete with straight lines and sharp angles.

Âksâr khâm (អក្សរខម) is a style used in Pali palm-leaf manuscripts. It is characterized by sharper serifs and angles and retainment of some antique characteristics, notably in the consonant kâ (ក). This style is also for yantra tattoos and yantras on cloth, paper, or engravings on brass plates in Cambodia as well as in Thailand.

You’re very right. And that script is even more complex!

Have you ever seen any text in the Ariyaka script created by King Mongkol?

The Ariyaka alphabet was invented by King Mongkut Rama IV of Siam (1804-1868) as an alternative alphabet for Pali. He considered the Khmer alphabet, which was commonly used to write Pali, to be too complicated and decided to create an alphabet that was easier to use and more Western in appearance.

The King devised printed and handwritten versions of the alphabet, and because printing was not widespread at the time and missionaries controlled the printing houses, he set up his own printing house and published a number of books in Pali using the Ariyaka alphabet.

When corresponding with Buddhist monks in other countries, especially Sri Lanka, the King wrote in Pali in the Ariyaka alphabet, and also in the Latin and Khmer alphabets. Some of the Sri Lankan monks wrote back using the Ariyaka alphabet. He hoped that his alphabet would be come the standard alphabet for Pali.

It would be great to have Pali texts in SuttaCentral rendered in the Ariyaka script! It is so beautiful! Any chance that could happen bhante @sujato?

Windows users may not realize they have a built in Sinhala font (starting with about Win 7) called Iskoola Pota. The tralsation? School Book.

Have you ever seen any text in the Ariyaka script created by King Mongkol?

No. I’d heard about it but this is the first time I’ve seen it. A bit ugly, I think. If one really doesn’t care about looks and is aiming for maximal utility, I should think a better option would be a modification of the Shavian script.

The Shavian alphabet (also known as the Shaw alphabet) is an alphabet conceived as a way to provide simple, phonetic orthography for the English language to replace the difficulties of conventional spelling. It was posthumously funded by and named after Irish playwright George Bernard Shaw. Shaw set three main criteria for the new alphabet: it should be (1) at least 40 letters; (2) as "phonetic" as possible (that is, letters should have a 1:1 correspondence to phonemes); and (3) distinct from the...

With all due respect, you are such a nerd bhante.