Hi, I never find the parts of the vinaya I want to read. For example Vinaya 5.128. What exactly do the numbers mean and how can I navigate there?
With Mettā

Hi @UpasakaMalavaro, it is very confusing and quite understandable that you can’t find the parts of the vinaya you are looking for! This is a difficult area to get one’s head around as there are many different reference systems that exist. I wanted to provide a quick and easy answer for you, unfortunately I seem to have gone down the rabbit hole and through the wonderland of pali text idiosyncrasies and in short, a simple answer is not possible. So…

I find that some contextualising info is useful.

There are three main divisions in the Vinaya pitaka:

The first thing to remember is that these works were originally only of interest to scholar monks and when they came to the West, were only of interest to a very small group of elite scholars. This accounts for some of the obscure referencing methods, which, essentially, require you to have a copy of the text on your shelf to refer to, which you would have if you were a 19th century pali scholar! But alas, most of us don’t today… Before that, the texts, in their original Pali form, were recorded in various palm-leaf manuscripts found across Asia, all with minor variations such as spelling. These texts were collected and compared by the Pali Text Society (PTS) is the late 1800’s and a PTS standardised edition of the Pali text called Vinayam Pitakam was created, edited by Hermann Oldenberg in 1879-83, containing 5 volumes.

One important thing to note about this edition is that PTS published the different books of the Vinaya out of the order that we usually place them, thus the Mahavagga was published first and becomes Volume 1 and Culavagga, published second is Volume 2 of the PTS set.

When referring to the PTS Pali edition of vinaya texts, they are usally referenced as Vin, followed by volume (often in Roman numerals) and page number of that original edition:
e.g. Vin II 24 (Vinaya pitaka, volume 2, page 24).

Around the same time, Oldenberg and T. W. Rhys-Davis were writing translations based on those Pali texts, these partial translations first appeared as *Vinaya Texts * in the much broader series, the Sacred Books of the East (SBE). These translations form 3 volumes (1. Patimokkha; 2. Mahavagga; 3. Culavagga, though in the SBE series they have different volume numbers.) These translations mostly by Rhys Davids, being the earliest attempts available, are not usually relied upon today but are still referenced.

Later, in the early 20th century, the standardised PTS Pali text, Vinayam Pitakam, was also the basis for subsequent English translations by IB Horner, who translated the entire Vinaya’s three main divisions over thirty years, calling the project The Book of the Discipline, producing 6 volumes.

The Book of the Discipline , tr. I.B. Horner.

I’m not 100% certain, but it seems that more recent digital editions do not follow Horner’s 5 volumes model, and instead divide the bhikkhu and bhikkhuni vibhangas into 2 volumes, combine the Mv and Cv into a 3rd Khandhaka volume, and have the Parivara as Vol 4, the last.

When referencing Horner’s translation, there are a variety of methods. Mostly you will see this:
BD 4 31 (book of discipline, volume 4 [the Cv], page 31)

However, as Horner’s edition references the PTS Pali edition and sections within her text, those are often given instead.

Another reference system is the sectioning system embedded by Oldenberg and Rhys-Davids in the romanised PTS edition, which conveniently gives precise section numbers that are not dependent on page numbers. Such as Kd.1.13.2 which is the book of Khandhakas chapter 1, section 13, subsection 2. These divisions are displayed within the printed text and are these days incorporated into digital and online formats.

Here’s an entirely random example of how these various reference systems work together:

Kd.1.13.2 ThenMāra, the Evil One, approached the Lord; having approached, he addressed the Lord with verses:

BD.4.31 Then Māra, the Evil One, thinking, “The Lord knows me, the well-farer knows me,” pained, afflicted, vanished then and there. Vin.1.23

Here, the Kd.1.13.2 refers to the Khandhakas, chapter 1, section 13, subsection 2. BD.4.31, refers to the Horner translated version, volume 4, page 31 (the reference is for the top left, beginning of the page); and Vin.1.23 refers to the romanised pali text, (unlike other references in the PTS edition, the vinaya references are for the bottom right hand of the page)
This is how the original printed text looks:

You can see the PTS romanised text info on the suttaplex screen, it’s on the line directly under the large English title of the Sutta, on the right, next to the book icon. You can use this as a guide to finding the reference you are looking for. An example here is you can see the ref Vin v 115, your reference Vin 5 128 will be somewhere on this long page.:

A hot tip is to make sure you enable the View Textual Information settings turned on so you can see the reference info in the margin of the texts. 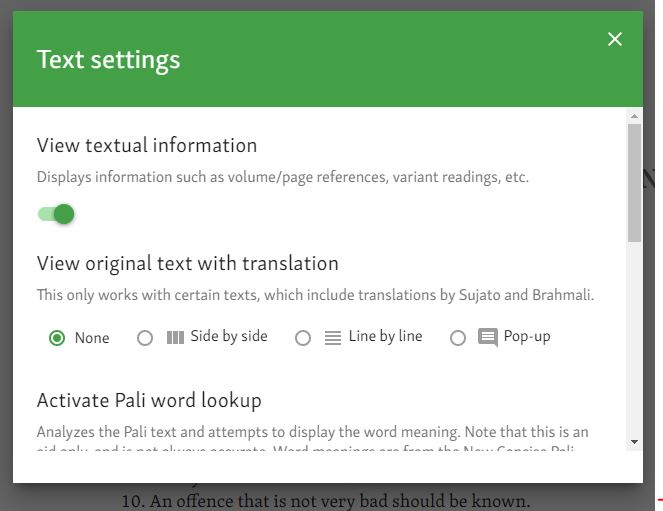 Unfortunately it is just not a simple case of using a search function for a reference on SuttaCentral. This is due to the variety of texts used and the different translations not neatly matching up. This will change with Ajahn Brahmali’s forthcoming translation, hopefully. Here’s the SuttaCentral page on numbering which gives an indication of the complexity involved and how SC deals approaches numbering.

For any student of Buddhist texts, one of the stumbling blocks is finding your way around. How do you get that sutta you want? This problem arises partly because there are simply so many texts, and partly because there are multiple editions of each text. The problem is compounded on SuttaCentral as we incorporate texts from multiple different canonical sources, and these have never before been presented as a combined edition.

We try to use the simplest, most rational and consistent approach for our primary numbering system. This is fine for most people, and it is what we recommend when sharing or citing our texts. But some students will be wanting to look up references from different sources, so for their convenience we supply additional references.

This long reply probably wasn’t entirely the answer you were looking for, but I hope that it is helpful. If you’re interested in particular texts within Vinaya, it’s good to get familiar with the overall structure of vinaya pitika. This way finding them becomes easier.

PS Bhante @Sujato I know I already perstered you abut this today, but can you please check to see that I didn’t make any errors. My brain hurts!

That’s super-helpful, thanks. I did the editing and preparation for the whole of Horner’s Vinaya translation, and I still get confused.

If there is one thing that the Bible folks got right, it is using chapter-and-verse references for everything!

Thanks,
Here is the Vinaya from the Pali Text Society, it’s easy to look it up there. 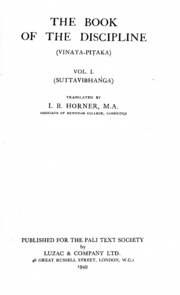 I. B. Horner - Vinaya Pitaka (The Book of the Discipline) : Pali Text Society...

I.B. Horner - Vinaya Pitaka (The Book of the Discipline of the Tipitaka)

Yeah but it’s still not searchable for the pali reference numbers which you were talking about such as Vin 5. 128 to use your example above. And you still need to know a bit about the original PTS volumes and the translated edition to know which book to search, and then scroll through the whole pdf!

Much faster to use SuttaCentral, which is segmented and has the added benefit of having the Pali to compare.